NATIONAL COUNCIL (JCM) WRITES TO THE FINANCE MINISTER ON DEDUCTION OF INCOME TAX ON PF. 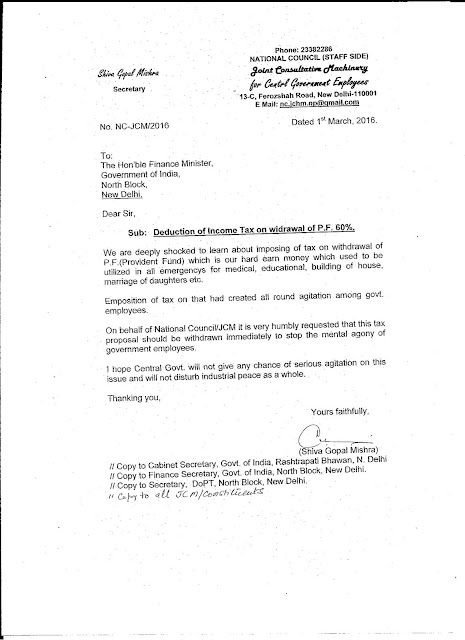 The task force will be headed by Establishment Officer and Additional Secretary in Department of Personnel and Training (DoPT) Rajiv Kumar and it will submit its report next month, officials said today.

The prime minister has approved the proposal to constitute a task force to examine the issues of rationalisation and optimisation of human resource in various ministries to align them with financial resources and focus areas of the government, they said.
Minister of State for Personnel Jitendra Singh said rationalisation of staff is of paramount importance for good governance.

“This decision has been taken keeping in line with the Modi government’s commitment of maximum governance and minimum government. We are also considering restructuring existing tribunals, autonomous bodies and central public sector undertakings to ensure better optimisation of human resource,” he told news agency PTI in New Delhi.

The task force has two joint secretaries from Cabinet Secretariat, one each from the DoPT and Department of Expenditure as members, the officials said.

In his Budget speech for 2016-17, Finance Minister Arun Jaitley had said a task force has been constituted for rationalisation of human resources in various ministries.

“A comprehensive review and rationalisation of autonomous bodies is also underway,” he had said.

As per its Terms of Reference (ToR), the task force will take stock and recommend measures to optimise senior positions in the Government of India, covering the posts in the secretariat and outside the secretariat including Chief Vigilance Officers – who act as a distant arm of Central Vigilance Commission to check corruption, various autonomous bodies, regulatory bodies, attached and subordinate offices.
It will also review roles and requirements of these posts, including eligibility criteria and recommend measures to achieve synergy and convergence of purposes and resources, the ToR said.
The task force will review the processes involved in filling these posts and recommend rationalisation and is required “to examine and incorporate global best practices in this regard”, it said.

There are about 50 lakh central government employees working in various ministries.
Source: NDTV