As per the directions of the Hon'ble CAT Chandigarh Bench, Directorate has issued orders on 27.05.2011 revising the vacancy position for PS Group B Examination to be held on 29.05.2011. The revised vacancy position is as follows:

LUCKNOW: In some good news for government employees, Lucknow's consumer dispute redressal forum has ruled that government employees who take loans from their departments and pay interest on the sum will henceforth be regarded at par with other 'consumers' of the department.
The ruling was made in response to a complaint made by Ahmad Hussain, a retired official of the postal department. During his years at the department, Hussain took a loan of Rs 69,620 for constructing a house.
The defending party, in this case the Department of Post and its officers, in their counter-affidavit submitted to the forum accepted that Hussain was an employee of the postal department and that he had taken a loan. Officials of DoP also accepted that the complainant had re-paid the loan with an interest amount.
The forum, in the matter, observed that the complainant is a consumer because he took a loan from his department and paid interest on the same. Granting of a loan to an employee was a service given by the postal department to Hussain.
Further, by earning interest on the loan amount the department also made profits on the service rendered.
In such situations, the forum added, despite being an employee of the department, the complainant will also be considered a consumer of the department. Despite the fact that complainant paid back the loan along with an interest, postal department could not return the complainant's document. "This amounts to lack in service," observed the forum. The DoP has now been ordered to not only return Hussain's original documents within a month from getting the certified copy of the forum's order, but also pay him a compensation amount of Rs 5,000 for mental harassment and another Rs 5,000 as litigation cost.

HISTORIC JUDGMENT ON TBOP, BCR GETS DILUTED IN SUPREME COURT

TBOP is equal to LSG and BCR is equal to HSG-II. The historic Judgement pronounced by Chennai CAT and uphold by High Court, Chennai has been diluted after the Supreme Court dismissed the SLP filed by the Department with the observation that the officials had been retired from service. Our general secretary is the main instrumental for filing and processing the case of Com. Perumal up to Supreme Court. 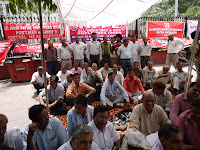 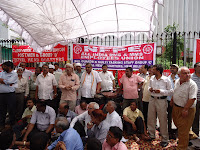 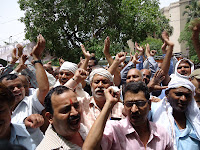 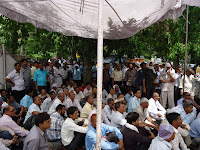 MASS DHARNA IN FRONT OF DAK BHAWAN NEW DELHI ON 25.05.2011 UNDER THE BANNER OF POSTAL JCA CONSISTING NFPE, FNPO AND GDS UNIONS.

Encouraging reports are being received from all corners of country.

Revolutionary greetings to all Comrades who participated in Dharna.

The main factors of census of Central Government employees are given below for your ready reference.
(1). As per the result of Census Enquiries, the total regular employment under Central Government as per this census was 31.16 lakh as against 31.64 lakh of previous census.
The employment has, thus, recorded a decline of 1.52%.

(3). Out of 31.16 lakh regular employees,
3.20 lakh were women.
The proportion of women in the total employment shows an increasing trend.
It is 10.28% in this census against 9.68% in previous census and thereby indicating empowerment of women.


(4). About 96% of regular Central Government employees were Non-Gazetted.
The overall ratio of Gazetted to Non-Gazetted employees was 1:22.
In Ministry of Railways, ratio, however, was 1:116.

CONFEDERATION OF CENTRAL GOVERNMENT EMPLOYES AND WORKERS. CIRCULAR No 11 :

DEPARTMENT CALLS FOR INFORMATION WHERE MACPS IS LESS ADVANTAGEOUS
File No. 4-7/(MACP/2009-PCC Ministry of Communiction & IT, Department of Posts Pay Commission Cell

Subject:- GRANT OF FINANCIAL UPGRADATION IN THE PROMOTION HIERARCHY INSTEAD OF GRADE PAY HIERARCHY UNDER THE MACPS-FURNISHING THE INFORMATION REGARDING.

DOP&T vide OM No. 42012/1/2011-Estt (D) dated 05th May 2011(Copy enclosed has intimated that “ in the third meeting of the Joint Committee of Modified Assured Career Progression Scheme (MACPS) heldon 15 Mar. 2011, it has been decided that necessary information in respect of specific categories of employees where the MACPS is less advantageous that the erstwhile ACPS may be called to from Ministries of Railways, Defence, Urban Development, Home Affairs and Department of Posts for taking a conscious decision in the matter.”


2. In this context, I am directed to request you to send the requisite information/inputs on the issue latest by 30 May 2011 for onward submission to DOP&T.

“ Please accord priority to it.”

Subject:- Grant of financial upgradation in the promotion hierarchy instead of grade pay hierarchy under the MACPS-furnishing the information regarding.

Based on the discussion with Staff Side in 3rd meeting of the Joint Committee of Modified Assured Career Progression Scheme (MACPS) held on 15.03.2011 under the chairmanship of the Joint Secretary (Establishment) Department of Personnel & Training, it has been decided that the necessary information it has been decided that necessary information in respect of specific categories of employees where the MACPS is less advantageous that the erstwhile ACPS may be called to from Ministries of Railways, Defence, Urban Development, Home Affairs and Department of Posts for taking a conscious Decision in the matter.”


2. The Ministries of Railways, Defence, Urban Development, Home Affairs and Department of Posts are therefore, requested to send their information in the matter to this Department at the earliest.

TRACK YOUR APPLICATION - FOR ALL TYPE DEPARTMENTAL EXAMINIATION

GET READY FOR IMMEDIATE STRIKE IF SITUATION WARRANTS
STRIKE DATE WILL BE ADVANCED IF DEPARTMENT GO AHEAD WITH
IMPLEMENTATION OF MCKINSEY REFORMS:
FIVE LAKHS POSTAL EMPLOYEES OF INDIA POST
IN ONE VOICE DECLARE:

· NO MORE CLOSURE AND MERGER OF POST OFFICES
· NO MORE CLOSURE AND MERGER OF SORTING SECTIONS AND RMS OFFICES
· NO MORE CURTAILMENT OF DELIVERIES AND POSTMEN BEATS
· NO MORE FIRST CLASS MAIL HUBS AND DELIVERY HUBS
· NO MORE FRANCHISE (PRIVATE) POST OFFICES AND POST SHOPPE.
· NO MORE OUTSOURCING AND CONTRACTORISATION OF POSTAL FUNCTIONS
AND ALSO WE DEMAND
ô IMMEDIATE SETTLEMENT OF LONG PENDING SECTIONAL DEMANDS OF ALL CADRES OF POSTAL AND RMS EMPLOYEES INCLUDING GRAMIN DAK SEVAKS AND CASUAL LABOURERS.
INDEFINITE STRIKE FROM 2011 JULY 5TH
Ø IN 1946 JULY ENTIRE P&T EMPLOYEES WENT ON INDEFINITE STRIKE AGAINST THE BRITISH IMPERIALISM
Ø IN 2011 JULY ENTIRE POSTAL EMPLOYEES ARE GOING AHEAD FOR ANOTHER INDEFINITE STRIKE AGAINST THE IMPERIALIST GLOBALIZATION POLICIES AND THE US-BASED MCKINSEY REFORMS IN INDIA POST
WE DON’T WANT THE FOREIGN CONSULTANT TO DECIDE OUR FATE
MCKINSEY IS FOR PRIVATISATION OF INDIA POST
WE SHALL OPPOSE IT LOCK STOCK AND BARREL
WE ARE READY TO SACRIFICE TO SAVE INDIA POST
PREPARE FOR A DETERMINED AND UNCOMPROMISING STRUGGLE
MAKE THE MAY 25TH DHARNA PROGRAMME A GRAND SUCCESS.
ORGANISE CIRCLE LEVEL JOINT CONVENTIONS OF NFPE & FNPO
PARTICIPATE IN THE JUNE 19TH ALL INDIA JOINT CONVENTION AT CHENNAI.

We are in receipt of encouraging reports from various circles and Divisions about the mobilisation by grass root level workers and leaders for the total participation of employees in the indefinite strike from 5th July 2011 as per the call of Central Joint Council of Action (NFPE, FNPO & GDS Unions)
Department’s move for implementing the Mckinsey Consultancy’s disastrous recommendations has resulted in allround protest and stiff resistance from employees especially in Chennai and Hyderabad. Chennai Postmen staff has went on three day’s strike and successfully resisted the Mckinsey reforms and halted it. Andhra comrades are conducting continuous agitational and campaign programmes throughout the Circle against the unilateral implementation of Mckinsey reforms. “Mckinsey Go Back” has become the slogan of the fighting comrades.
Postal Board is trying to go ahead with the Mckinsey reforms. Speed post hubs have resulted in erosion of public faith in the efficiency of this premium services. Now the department want to implement hubs for first class ordinary mails and registered articles. Total number of sorting offices will be reduced to 77. Further Chief PMGs have already sent proposals to Directorate for closure / merger of thousands of Post offices in urban areas. Privatisation and contractorisation of the Mail Motor Service (MMS) is also on the anvil. Opening of Franchise Post offices (Private Post offices) in a new name called “Post shoppe” and outsourcing of many other postal functions are also under serious consideration. Orders are already issued abolishing the sorting postman cadre altogether.
Gramin Dak Sevaks are facing the worst attack they have ever faced after independence of the country. Bonus has been reduced. Norms for cash handling and stamp sale drastically reduced. Norms for calculating the workload and allowances of Branch Postmasters have been curtailed resulting in reduction of allowances. Compassionate appointments limited to 10%. 25% of the Postmen vacancies are given to outsiders. And as a last blow, the GDS Conduct and Employment Rules has been changed and instead of “Employment” the word “Engagement” has been substituted. “Appointing authority” is changed as “Recruiting Authority”, thus permanently blocking the chances of GDS to be treated as Civil Servants.All the adverse recommendations of Nataraja Moorthy Committee are implemented one by one. The revision of wages of casual labours w.e.f. 01.01.2006 is still pending and the orders for outsourcing their work is not yet withdrawn.
Many sectional demands listed in the 25 point charter of demands are yet to be settled.Cadre restructuring of all cadres, Decentralization of PLI and RPLI, Filling up of vacancies, Revision of OSA and OTA rates, Non implementation of JCM (Departmental Council) assurances, Non-settlement of demands raised in the Postman Committee, issues of MTS, parity in pay-scale and promotion to MMS Drivers, SBCO and Civil Wing issues, problems of Postal Accounts Staff, counting of services of ex-RTP staff, Discrimination towards PO and RMS Accountants Cadre, MACP anomalies, review of Postmaster cadre orders etc. are agitating the minds of the employees for the last more than one year.
Comrades, the very existence of Postal Department as a Government Services and its five lakhs employees is under threat from the Government. This is a question of “DO or DIE”.We have to face the challenge. We shall fight it out with all forces at our command. We are confident that we can stop this onslaught.
Let us prepare ourselves for a massive breakdown from 5th July 2011, which alone can compel the Government to come forward and settle the genuine demands of the Postal workers.
Will greetings,

NUMBER OF SORTING OFFICERS WILL BE REDUCED TO 77.