OBSERVE MAY DAY BY ORGANISING THE GATE MEETINGS, RALLIES ETC AT ALL WORK PLACE .


11th  MEETING OF THE POSTAL SERVICES STAFF WELFARE BOARD WILL BE HELD IN SHRI G.P. ROY COMMITTEE ROOM OF DAK BHAWAN, NEW DELHI ON 16.05.2012 UNDER THE CHAIRPERSONSHIP OF HO`NBLE MINISTER OF STATE FOR COMMUNICATIONS & IT
Posted by All India RMS & MMS Employees Union - Group 'C' at 12:00:00 PM


Consequent upon increase of Dearness Allowance to Central Government Employees drawing 6 CPC scales, the Govt. has decided to increase the rates of DA for Officers who continue to draw their salary as per pre revised 5th CPC scales.  The rate of DA has been enhanced from the existing rate of 127% to 139% w.e.f. 01.01.2012.

Full text of OM dated 20.04.2012 is reproduced below:
No. 1(3)/2008-E.II (B)
Government of India
Ministry of Finance
Department of Expenditure
North Block, New Delhi
Dated: 20th April 2012
OFFICE MEMORANDUM
Subject:- Rates of Dearness Allowance applicable w.e.f. 01.01.2012 to the employees of the Central Government and the Central Autonomous Bodies continuing to draw their pay in the pre revised scale as per 5th CPC
The undersigned is directed to refer to this Departments O.M. of even No. dated 17th October, 2011 revising the Dearness Allowance w.e.f. 1.7.2011 in respect of the employees of the Central Government and the Central Autonomous Bodies who continue to draw their pay and allowances in the pre-revised scales of pay as per 5th Central Pay Commission.
2.         The rates of Dearness Allowance admissible to the above categories of employees of the Central Government and the Central Autonomous Bodies shall be enhanced from the existing rate of 127% to 139% w.e.f. 01.01.2012. All other conditions as laid down in the O.M. of even number dated 3rd October, 2008 will continue to apply.
3.         The contents of this Office Memorandum may also be brought to the notice of the organizations under the administrative control of the Ministries/Departments which have adopted the Central Government scales of pay.
4.         Hindi version is also attached.
Sd/- (Subhash Chand)
Dy Secretary to Govt. of India. 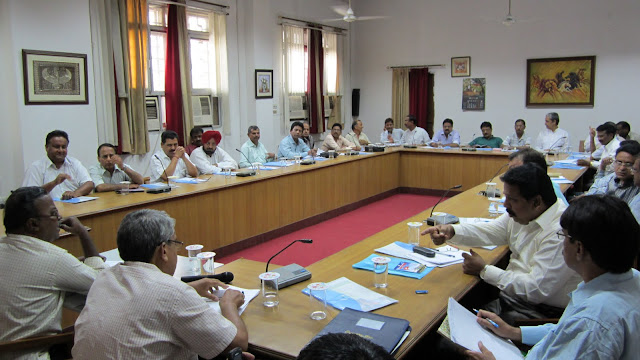 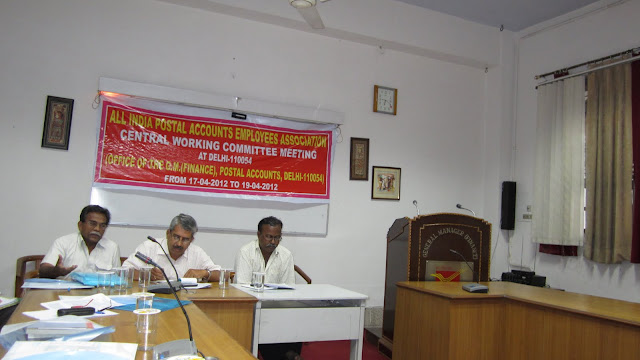 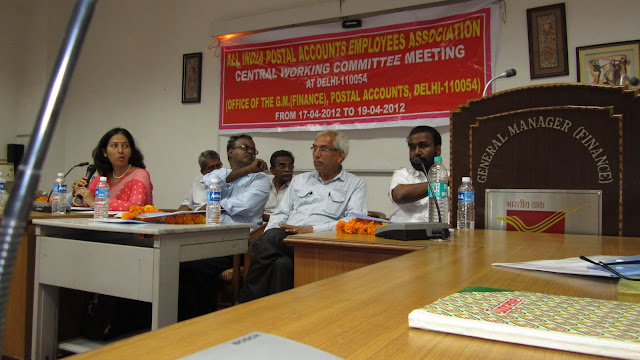 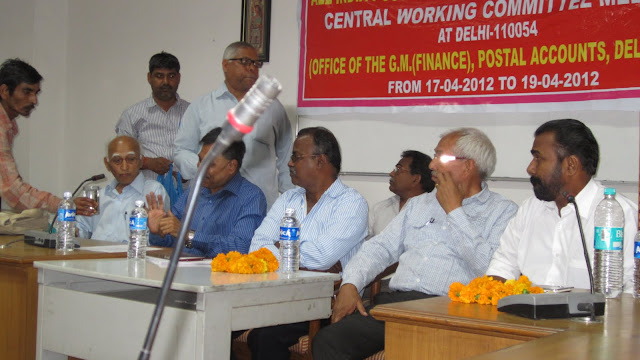 EMPANELMENT OF JTS, STC AND PS GROUP B OFFICERS TO SERVE IN POSTAL DIRCTORATE

SCHEDULE FOR THE LIMITED DEPARTMENTAL COMPETITIVE EXAMINATION FOR PROMOTION TO PS GROUP-B
Posted by All India RMS & MMS Employees Union - Group 'C' at 11:27:00 AM 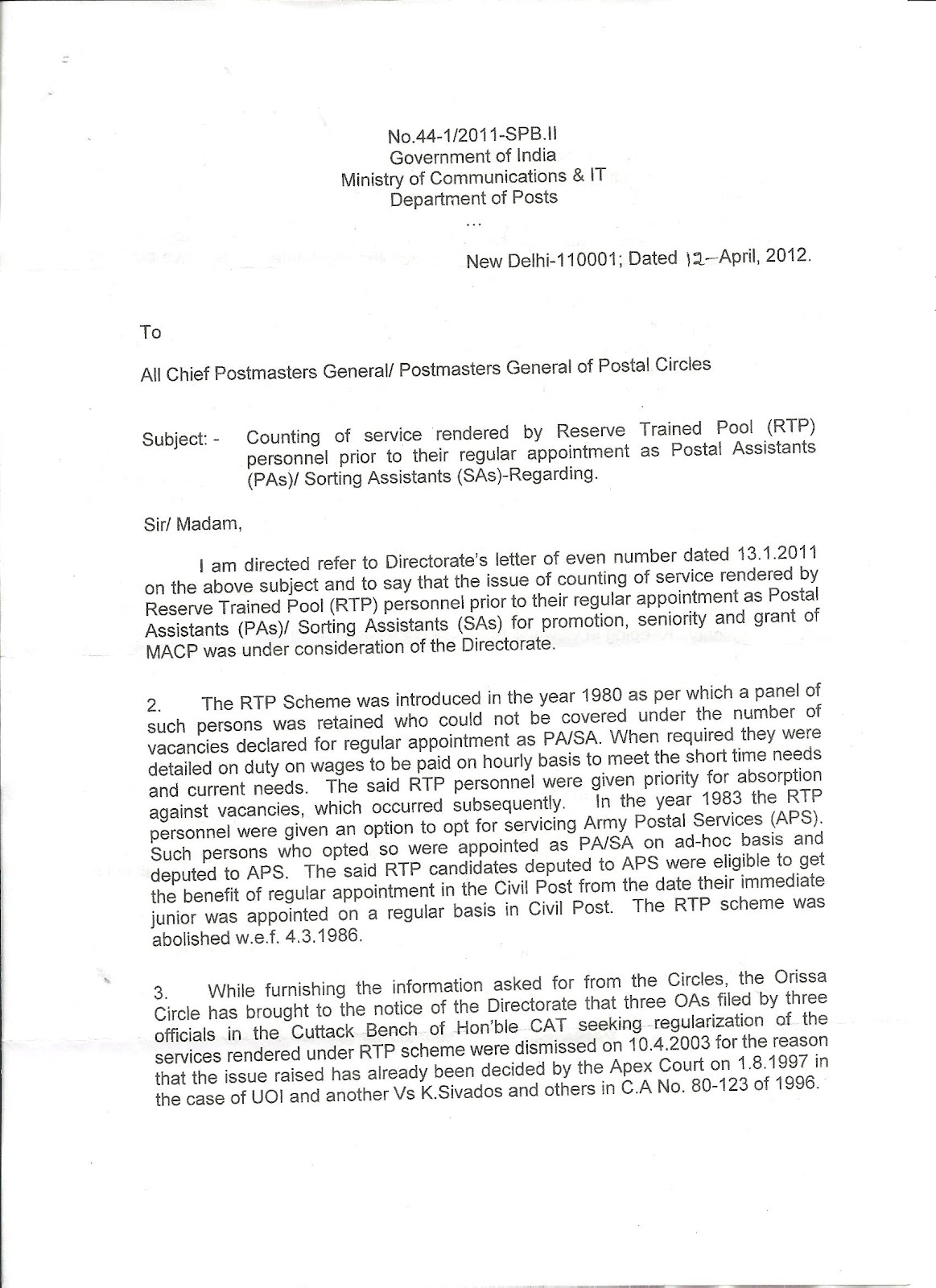 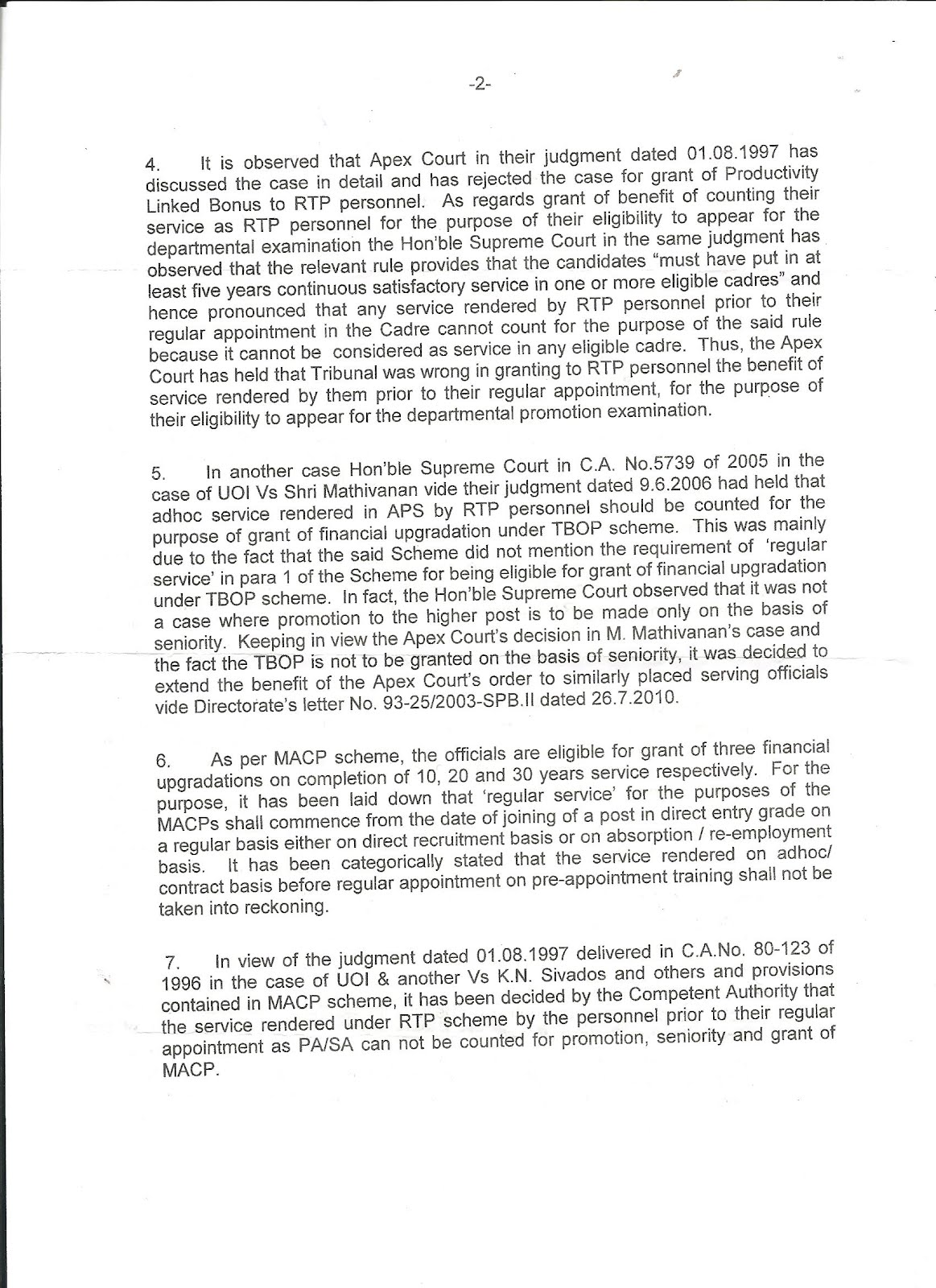 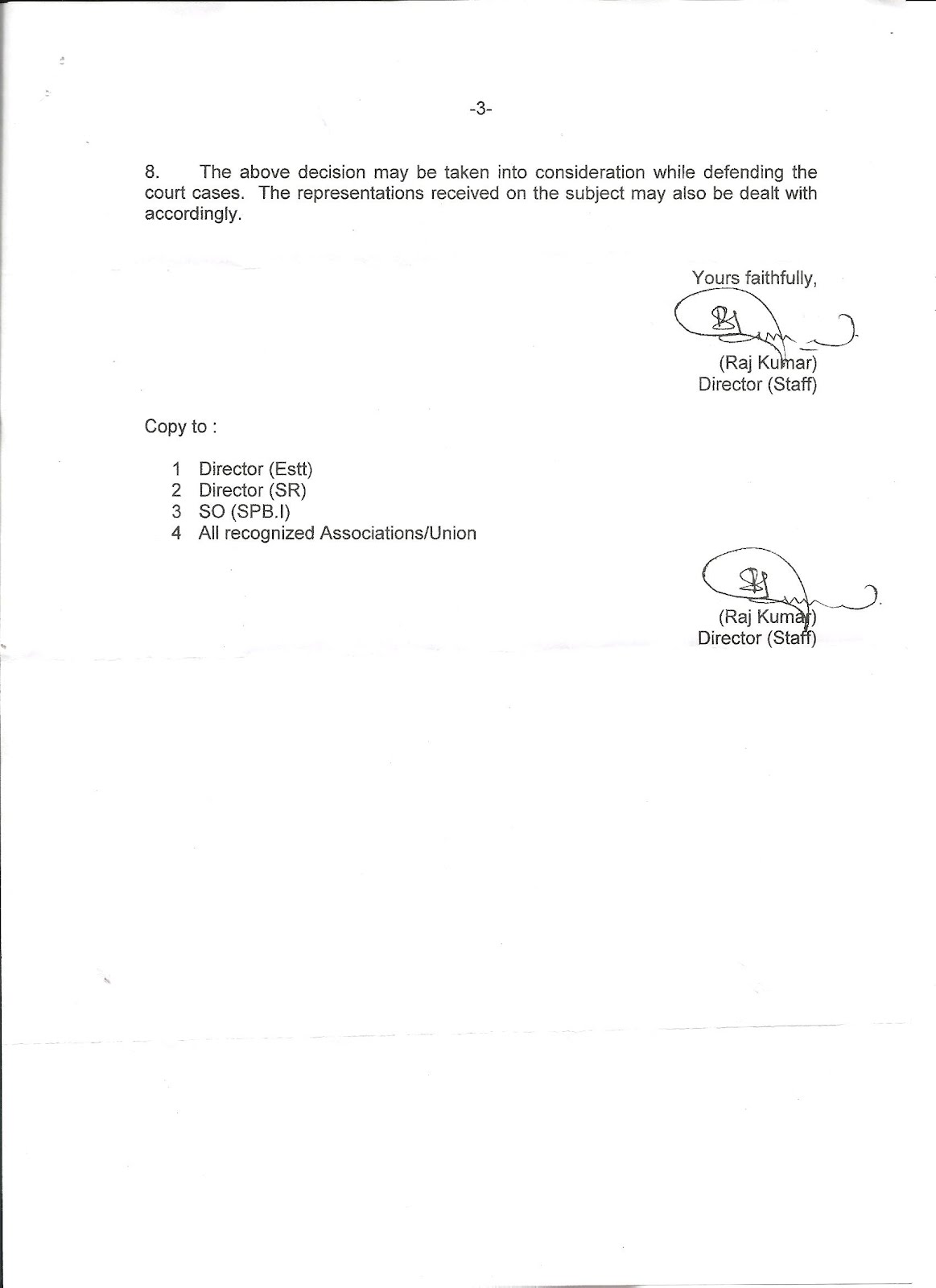 All Chief Postmasters General,
All G.Ms.(PAF)/Director of Accounts (Postal).

Consequent upon grant of another installment of dearness allowance with effect from 01st JANUARY, 2012 to Central Government Employees, vide Government of India, Ministry of Finance, Department of Expenditure O.M. No.1(1)/2012-EII(B), dated 3rd April, 2011, duly endorsed vide this Department's letter No.8-1/2012-PAP Dated 3.4.12, the Gramin Dak Sevaks (GDS), have also become entitled to the payment of dearness allowance on basic TRCA at the revised rate with effect from 01-01-2012. It has, therefore, been decided that the dearness allowance payable to the Gramin Dak Sevaks shall be enhanced from the existing rate of 58% to 65% on the basic Time Related Continuity Allowance, with effect from 1st January, 2012.

3. The expenditure on this account will be debited to the Sub Head 'Salaries' under the relevant head and should be met from the sanctioned grant. 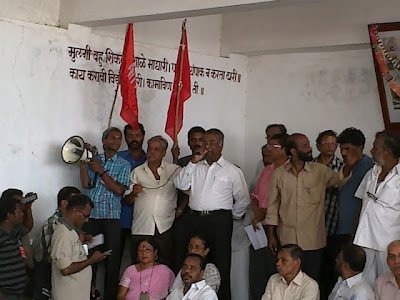 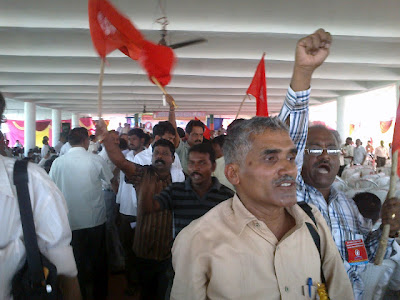 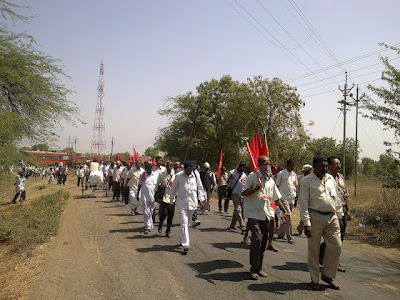 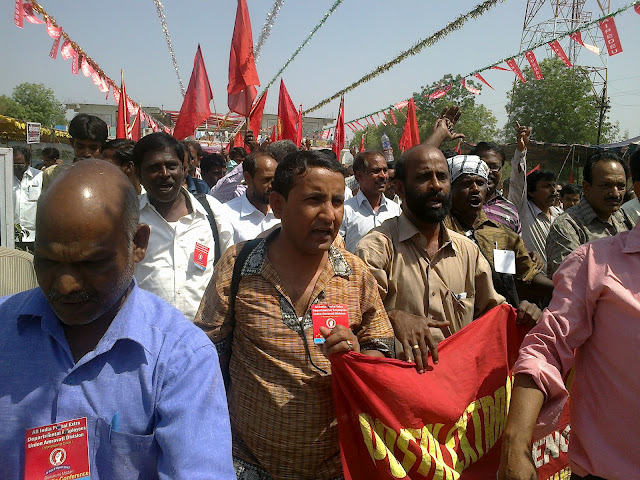 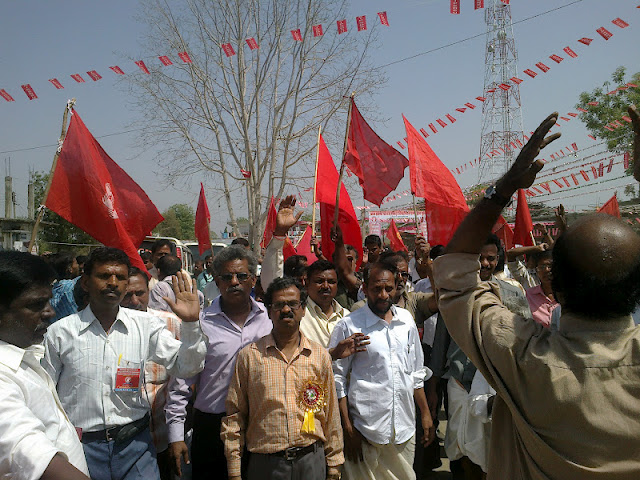 
GOVERNMENT OF INDIA
MINISTRY OF COMMUNICATIONS & IT
DEPARTMENT OF POST:: (GDS Section)
Dak Bhawan, Sansad Marg,
New Dehil – 110 001
No.19-10/2004-GDS (Part) Dated:10 April, 2012
To
Chief Postmaster General
Kerala Circle
Thiruvananthapuram – 695 033
LIMITED TRANSFER FACILITY TO GAMIN DAK SEVAKS – CLARIFICATION THEREOF.
This has a reference to your office letter No.CO/LC/21/OA/12 dated 27th Mar 2012 received only on 29.03.2012 seeking advice if the various categories of the GDS Posts as prescribed in Rule 3 (d) of GDS (Conduct & Engagement) Rules, 2011 could be classified based on the skills or hierarchy or TRCA slabs within these categories.
2. The issue has been examined in this Directorate and I am directed to clarify the position as under;-
(a) Rule 3 (d) the Department of Posts, Gramin Dak Sevaks (Conduct and Engagement) Rules, 2011 currently recognizes only the five categories of Gramin Dak Sevaks i.e. GDS BPM, GDS MD, GDS MC, GDS Mail Packer and GDS Stamp Vendor.
(b) With the issue and implementation of orders relating to downgrading the EDSO's to EDBO's the category of GDS SPM is not in vogue. For the purposes of TRCA, Gramin Dak Sevaks are closed as three categories i.e. GDS BPM, GDSMD/SV & GDS MC/Packer, Their TRCA has been fixed based on pre-revised scales of pay of the corresponding categories of regular Government employees on pro-rata bases. Their TRCA is further based on workload assessed as per laid down norms and slabs.
(c) There is no concept of higher or lower post or skilled within a category and /or amongst various approved categories as recognized from time to time.For the purpose of direct recruitment to MTS Group C post, their seniority is reckoned with reference to date of entry in any GDS post based on seniority in the concerned division as a whole. There is no categorization of various GDS posts into 'White Collar' or 'Blue Collar' and such a classification is not also defined anywhere.
(d) The 'Recruiting Authority' mentioned in Rule 4 and further defined in the Scheduled annexed to the Department of Posts, Gramin Dak Sevaks (Conduct and Engagement) Rules, 2011 is based on working arrangement and for administrative convenience only. As the Gramin Dak Sevaks are entitled to protection under Article 311 (2) of the Constitution as held by Apex Court, the concerned authority will exercise his disciplinary jurisdiction as per the categories of GDS, for which one is designated as recruiting authority.
(e) The existing provisions governing Limited Transfer Facility do not prescribe any restriction for allowing transfer form one category to another and amongst the various categories of Posts irrespective of TRCA slabs prescribed for these categories and even from one wing to another i.e., RMS to Postal or vice versa. The requirement is fulfilled of required qualification and other conditions for limited transfer facility.
(f) While circulating the Department of Posts, Gramin Dak Sevaks (Conduct and Employment) Rules. 2001 vide DG letter No. 22-1/2000-ED & Trg dated 24.04.2001, it was clearly provided in Para 4(ix) of letter dated 24.04.2001 that "executive instructions issued and published below the respective rules as also those brought out in other sections such as method of recruitment, etc of Swamy's Compilation of Service Rules for the Postal ED Staff shall also stand revised / amended mutandis in keeping with the amended / revised rules. Thus, the executive instructions providing for method of recruitment issued prior to circulation of the 2001 rules was provided by amending the Note II (iv) of Rule 3 of Rules and in accordance with the amended provision, limited Transfer Facility was provided under this Directorate letter No. 19-10/2004- GDS dated 17.07.2006 subject to terms and conditions mentioned therein.
(g) Hon'ble Supreme Court in the case of UOI Others vs. Kameshwar Prasad 1998 SCC (L&S) page 447 wherein the system and object of engaging EDA's and their status was considered and adjudicated upon, Held that P&T Extra Department Agent (C&S)Rules, 1964 are a complete code governing service, conduct and disciplinary proceedings against EDA's P&T EDA's Rules, 1964 were repealed and a fresh set of rules replacing the earlier rules was issued under GDS (Conduct & Employment) Rules, 2001 and thereafter 2001 rules have also been replaced by GDS (Conduct & Engagement) Rules, 2011.
(h) So far protection of TRCA is concerned, this Directorate letter No. 14-16/2001-PAP(Pt.) dated 11.10.2004 issued in supersession to all previous provisions provided for protection of TRCA on reduction of workload and redeployment of staff on abolition of post and not in cases where redeployment was made on request. These provisions were not applicable under transfers which have occurred under Limited Transfer Facility extended to GDS under this Directorate letter No. 19-10/2004-GDS dated 17.07.2006. Para 3 (iii) of this Directorate letter dated 17.07.2006 prescribed that TRCA of the new post shall be fixed after assessment of actual workload of the post measured with respect to the cycle beat in respect of GDS MD/MC/Packer/Mail Messenger in this Directorate letter No. 14-11/97-PAP dated 1.10.1987. Based on this analogy, the incumbents of GDS BPM post in terms of points. This Directorate vide letter No. 19-10/2004-GDS (part) dated 21.07.2010 prescribed further that on transfer to a new post, the GDS cannot have any claim for protection of their TRCA drawn in the old post and his/her TRCA will be fixed at the minimum of the TRCA slab of the transferred post depending upon the workload of the said post.
(i) The power to allow transfer under the Limited Transfer Facility is vested only with the Head of the Circle and not with any other lower functionary. The position on this has recently been clarified under No.19-10/2004-GDS (part) dated 19.03.2012.
3. In view of the foregoing, immediate action may please be taken to get rectified the stand in conformity with the above. In order to avoid controversies and different stands before the Court of Law in future, prior consultation/approval of the Head of the Circle in each court case is prescribed to the mandatory required before taking a stand before the Court of Law.
Sd/-
(Surender Kumar)
Assistant Director General GDS/PCC
Copy to:-
All Heads of Postal Circles except Kerala Circle- for information & disseminating the contenets to the notice of all concerned for strict compliance.