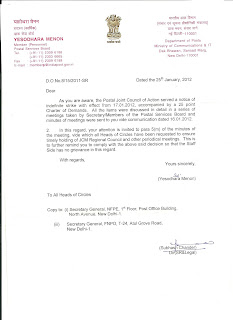 International Women Day
Observe 8thMarch befittingly
The Women Sub-Committee of the Confederation of CG Employees and Workers calls upon the entirety of leadership of all Affiliated Organizations to launch effective Programmes like Seminars, Conventions, Special Meetings of Women Workers all over the country on behalf of their respective organisations to befittingly celebrate the “INTERNATIONAL WOMEN DAY”. This is an occasion to approach all women members to unionize them in our unions and educate them as well all other menfolk about the rights and privileges of women employees as well as their special problems encountered at the work spots and in society. Please send your reports to the headquarters of Confederation after observing them effectively.
Com. Gita Ghoshal - Chairperson & Com. C P Shobana - Convenor.
Women Sub Committee
Posted by All India RMS & MMS Employees Union - Group 'C' at 12:31:00 PM

Subject:-Notice  of meeting of Standing Committee of Departmental Council (JCM) scheduled for 02.02.2012 at 11.00 AM in Dak Bhawan.

This has reference to SR Section`s communication No. 6/1/2010-SR dated 17.9.2010 circulating therewith of the meeting of the Departmental Council (JCM) held on 27.08.2010. The concerned Divisions were requested to take necessary follow up action, under intimation to SR Section.
2.Meeting of standing committee of Departmental Council (JCM) under the Chairpersonship of Member (P) , PSB has been fixed for 02.02.2012 at 11.00 AM in Shri K.R. Murthy Room, Dak Bhawan to review the follow up action taken by the respective  Divisions.

3.   Please make it convenient to attend the meeting.

This is to give notice that the employees who are members of the affiliates of the Confederation of Central Government employees and workers will go on one day's strike on 28th February, 2012.  The charter of demands in pursuance of which the employees will embark upon the one day strike action is enclosed.

1)         Concrete measures to contain price rise
2)         Concrete measures for linkage of employment protection with the concession/incentive package offered to the entrepreneurs,
3)        Strict enforcement of all basic labour laws without any exception or exemption and stringent punitive measures for violation of labour laws.
4)        Universal social security cover for the unorganized sector workers without any restriction
5)         Creation  of a National Social Security Fund with adequate resources in line with the  recommendation, of NCEUS and Parliamentary Standing Committees on Labour, Stoppage of disinvestment in Central and State PSUs, the  Central Trade Unions also demand immediate  action  by the Govt. of India to en sure:-
6)         No Contractorisatlon of work of permanent/perennial nature and payment of wages  and  benefits to the contract workers  at  the same rate as available to the regular workers of the Industry/establishment
7)         Amendment   of  Minimum   Wages   Act   to   ensure   universal  coverage irrespective of the schedules and fixation of statutory minimum wage at not less than Rs 10,000/-,
8)         Remove the ceilings on payment and eligibility of Bonus, Provident Fund; Increase the quantum of gratuity.
9)         Scrap PFRDA Bill/New Pension Scheme; Ensure pension for all.
10)       Compulsory registration of trade unions within a period of 45 days and immediate ratification of ILO conventions 67 and 96.

1.   Stop downsizing, outsourcing, contractorisation, coporatorisation and privatization of Governmental functions
2.   Fill up all vacant posts and create posts on functional requirements
3.   Revise wages of CGEs with effect from 1.1.2011 and every five years thereafter.
4.      Regularize the GDS, daily rated workers, contingent and casual workers by brining about a definite scheme of regularization.
5.      Remove restriction imposed on compassionate appointment ( end the discrimination on compassionate appointment between the Railway workers and other CGEs) 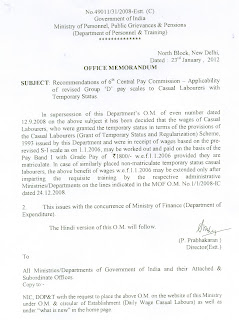 
Department of Posts order Enhancement of Various Allowances by 25% 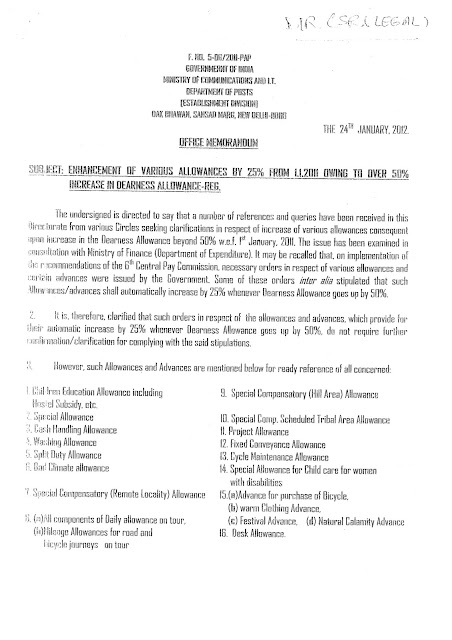 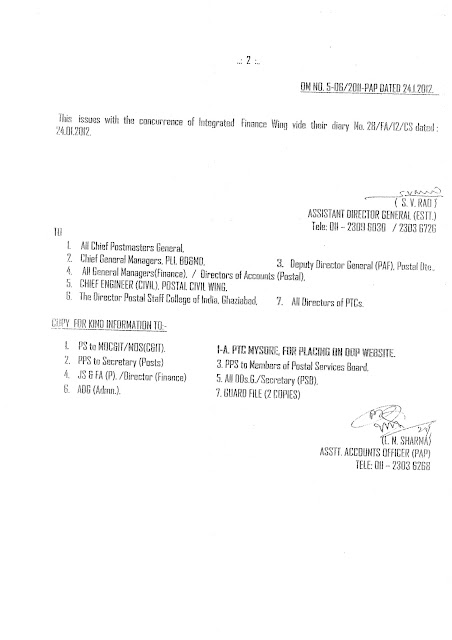 Constitution of Committee for Organizational restrurcturing in Department of Posts

The Competent Authority is pleased to constitute a committee as detailed below:

2. The terms of reference for this committee are:
·   To revisit the norms for creation of new Postal Division and Regions as wee as upgradation of Class II Divisions into Class I Divisions.
·   To study the feasibility of organizational restricting of fields formations (Circle and below) keeping in view the emerging needs for India Post in new socio-economic environment.
·   Review of norms for upgradation of Post Offices.
·   To study the feasibility of strengthening / creation of Postal Assistants/ Sorting Assistants posts in view of increased need of System Administrators.
·   Any other relevant issue as may be assigned by the Competent Authority later.

3. The time period of this Committee to submit its recommendations is three months.