The Union Cabinet chaired by the Prime Minister Shri Narendra Modi has approved the revision of project outlay for setting up of India Post Payments Bank (IPPB) from Rs.1435 crore to Rs.2255 crore as equity infusion to meet regulatory requirement.  The Cabinet also granted in principle approval for future fund infusion to the tune of Rs.500 crore for meeting regulatory requirements and technological upgradation.

The objective of the project is to build the most accessible, affordable and trusted bank for the common man; spearhead the financial inclusion agenda by removing the barriers for the unbanked and reduce the opportunity cost for the under banked populace through assisted doorstep banking.  The project supplement Government of India’s vision of “less cash” economy and at the same time promote both economic growth and financial inclusion.

India Post Payments Bank did a nationwide a launch by on September 1, 2018 with 650 branches/controlling offices.  IPPB has enable 1.36 lakh Post Offices to provide banking services and has equipped nearly 1.89 lakh Postmen and Gramin Dak Sevaks with smartphone and biometric device to provide doorstep banking services.

Since the launch of IPPB, it has opened more than 5.25 crore accounts with 82 crore aggregate number of financial transactions with Rs.1,61,811 crore which includes 765 lakh number of AePS transactions worth Rs.21,343 crore.  Out of the 5 crore accounts, 77% of accounts are opened in Rural areas, 48% are women customers with around Rs.1000 crore of deposit.  Nearly 40 lakh women customers received Direct Benefit Transfer (DBT) into their accounts valued at Rs.2500 crore.  More than 7.8 lakh accounts have been opened for school students.

Total financial expenditure involved under the proposal stands at Rs.820 crore.  The decision shall help India Post Payments Bank pursue its objective of furthering financial inclusion across India by leveraging the network of Department of Posts.  DS (Release ID: 1820526)

India Post over the recent days has been observing various URLs/Websites getting circulated in social media such as WhatsApp, Telegram, Instagram and through emails / SMS containing tiny URLs/ Short URLs, claiming to be providing Government Subsidies through certain surveys, quizzes.

We wish to inform the citizens of the Country that India Post is not involved in any such activities like announcing Subsidies, Bonus or Prizes based on Surveys etc. Public receiving such notifications/messages /emails are requested not to believe or respond to such fake and spurious messages or share any personal details.   It is also requested not share any personally identifiable information such as date of birth, Account numbers, mobile numbers, place of Birth & OTP etc.

India Post though is taking necessary action to prevent these URLs / links / Websites to be taken down through various prevention mechanisms. Public at large is once again requested not to believe or respond to any fake / spurious messages / communications / links.

India Post and Fact Check Unit of Press Information Bureau (PIB) have declared these URLs/Websites as fake through social media. 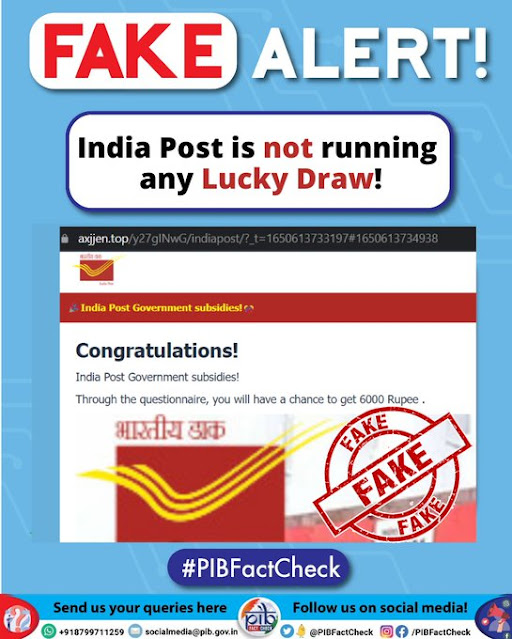 TRANSFERS/POSTINGS IN HAG+(MEMBER,PSB/ADDL.DG (COORD.) OF IPOS  (CLICK THE LINK BELOW TO VIEW) 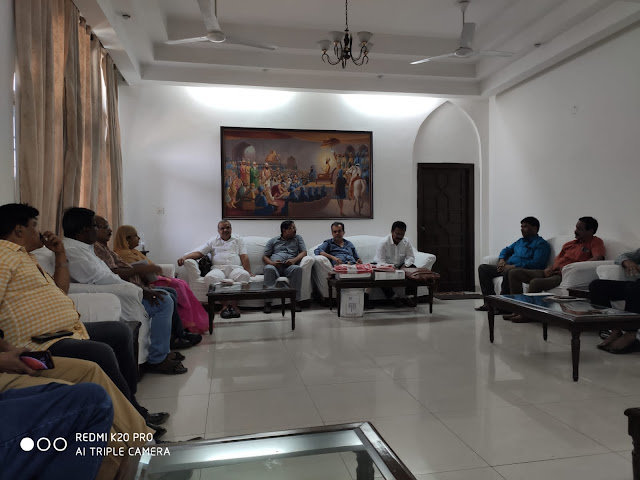 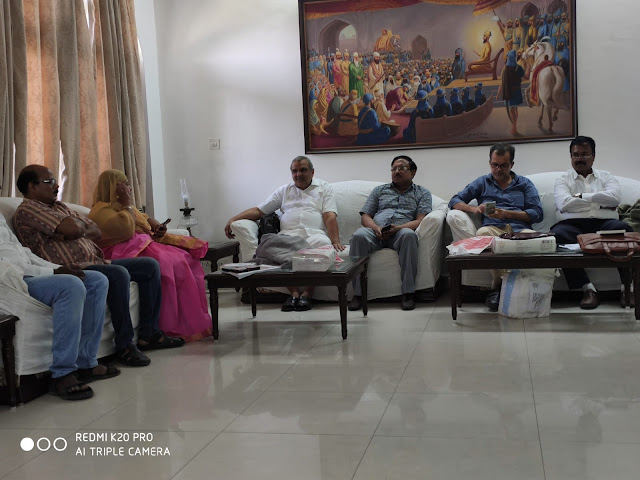 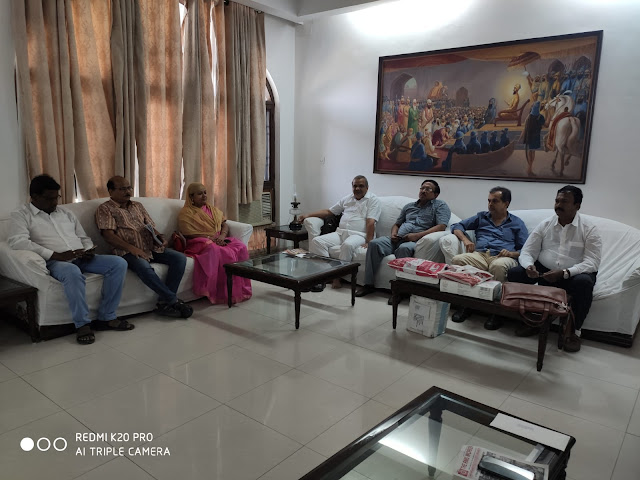 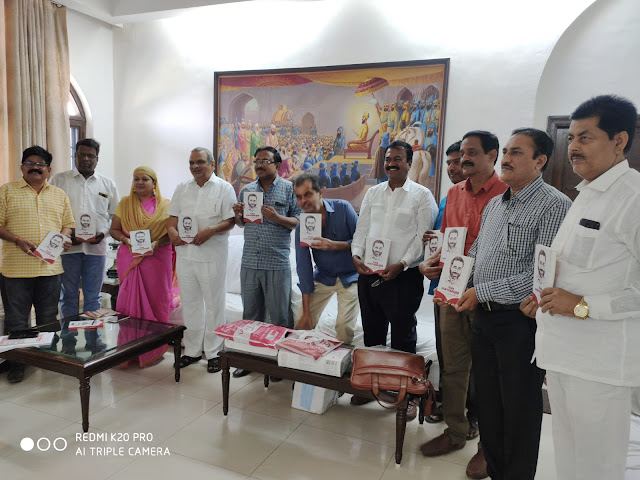 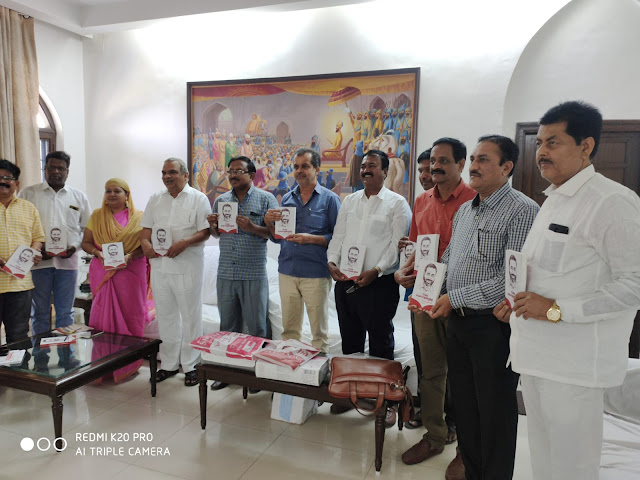 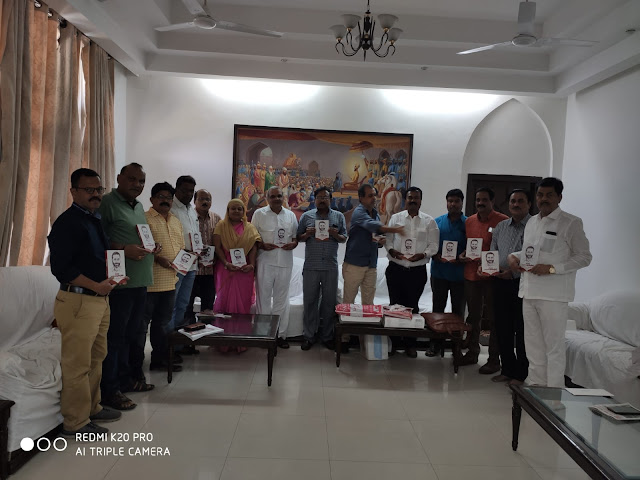 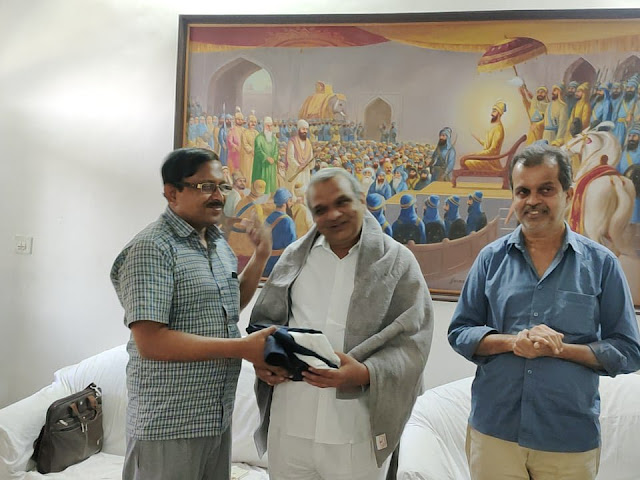 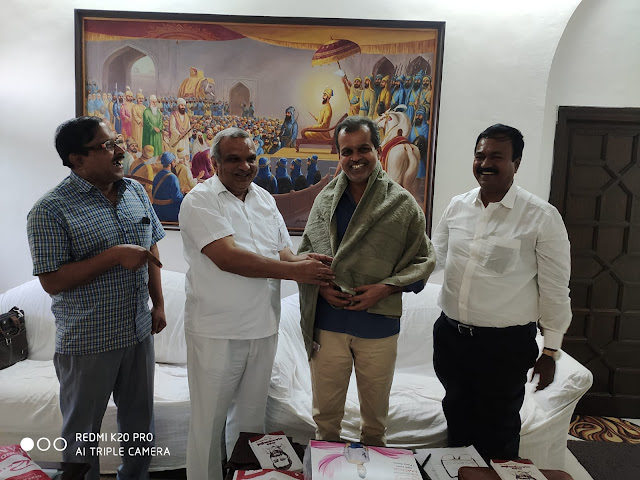 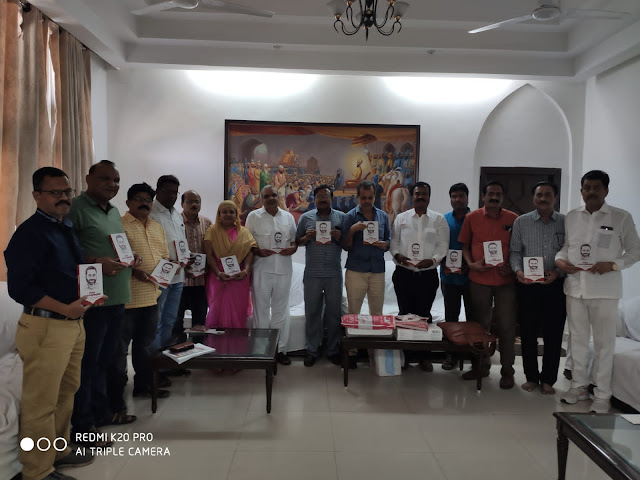 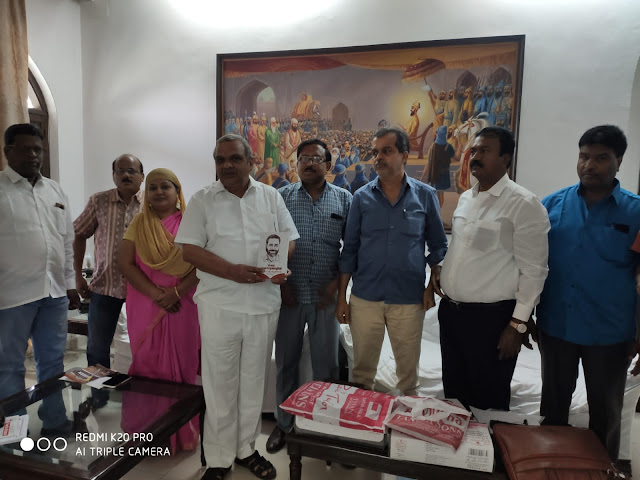 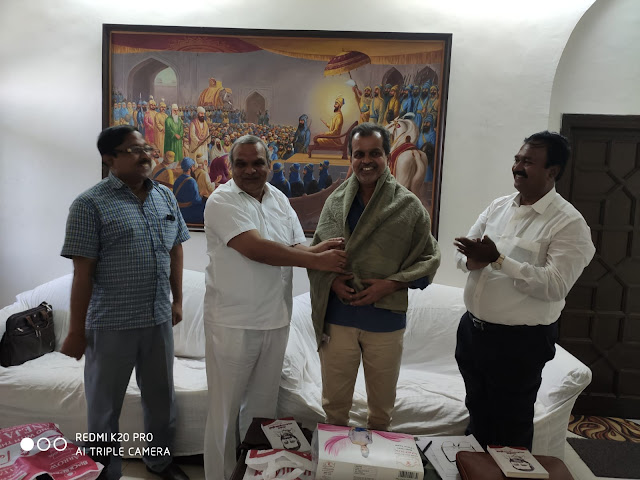 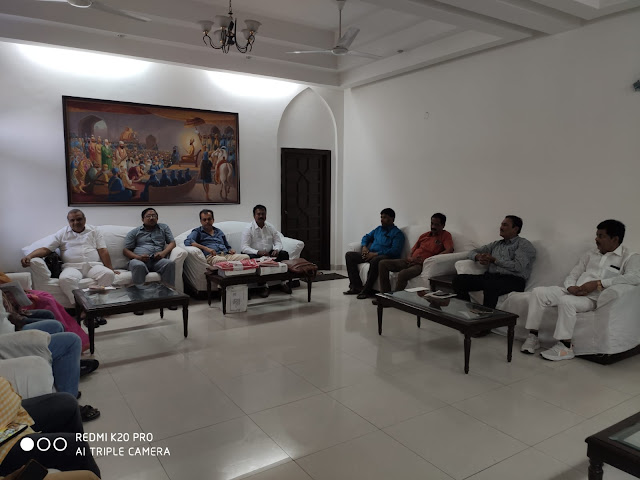 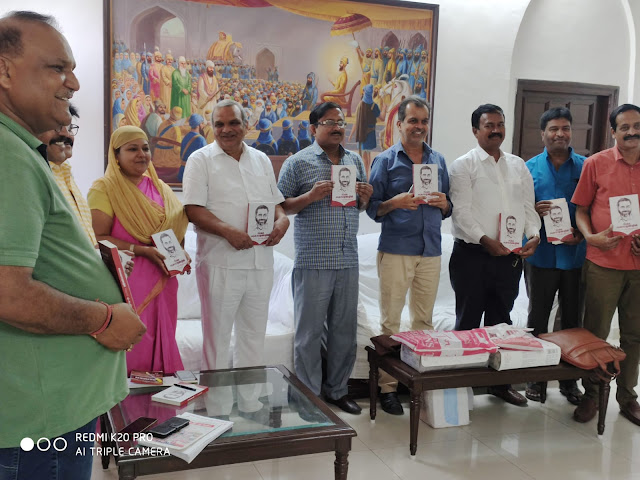 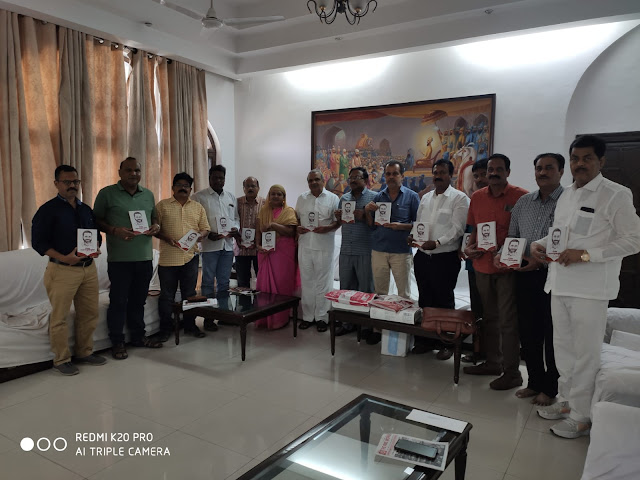 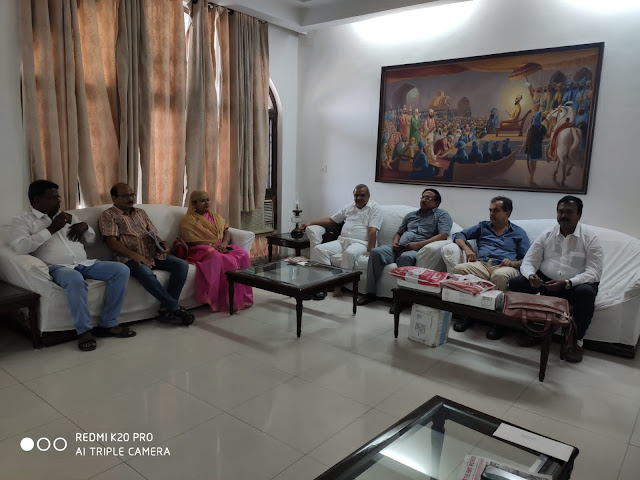 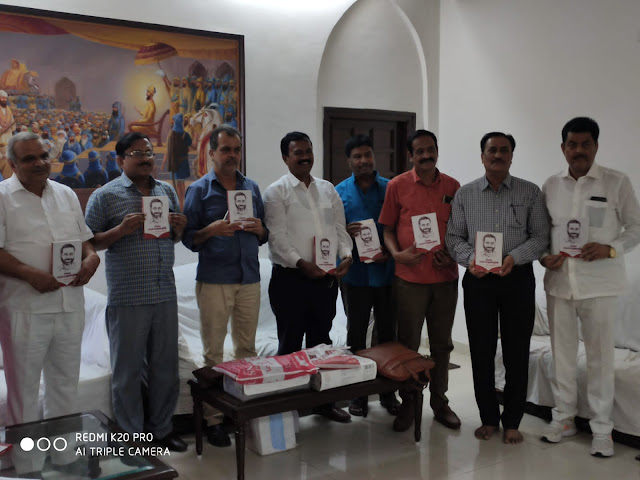 RESERVATION IN PROMOTIONS-PROCEDURE TO BE FOLLOWED PRIOR TO EFFECTING RESERVATIONS IN THE MATTER OF PROMOTIONS BY ALL DEPARTMENTS OF THE CENTRAL GOVERNMENT.

PORTAL WILL ENABLE CONSTANT CONTACT WITH PENSIONERS AND THEIR ASSOCIATIONS ACROSS THE COUNTRY AND WILL ALSO REGULARLY RECEIVE THEIR INPUTS, SUGGESTIONS AS WELL AS GRIEVANCES FOR PROMPT RESPONSE: DR JITENDRA SINGH

Union Minister of State (Independent Charge) Science & Technology; Minister of State (Independent Charge) Earth Sciences; MoS PMO, Personnel, Public Grievances, Pensions, Atomic Energy and Space, Dr Jitendra Singh today announced setting up of Single Window Portal for benefit of pensioners and superannuated elder citizens. The Portal, he said, will not only enable constant contact with pensioners and their associations across the country but will also regularly receive their inputs, suggestions as well as grievances for prompt response.

Addressing the 32nd Meeting of Standing Committee of Voluntary Agencies (SCOVA) for Review and Rationalisation of Pension Rules i.e (CCS) (Pension) Rules, 2021, Dr Jitendra Singh said under Prime Minister Narendra Modi, several revolutionary changes were brought in since 2014 in Pension Rules for bringing “Ease of Living” to the common man.

Dr Jitendra Singh said, the objective of Common Pension Portal is to create a single window digital mechanism for pensioners to raise their grievances and get the same resolved without approaching different authorities in person. He said, all Ministries responsible to process, sanction or disburse pension dues, are interlinked to this system and grievances are forwarded after assessment to the concerned Ministry/Department for resolution. Pensioners as well as Nodal officer can view the status of the grievance online till disposal in the system.

Dr. Jitendra Singh said we need to emphasise making good use of the knowledge, experience and efforts of the retired employees which can help in value addition to the Department of Pension & Pensioners' Welfare.

Dr Jitendra Singh said that Face Authentication Technique through Android phone for submission of life certificate digitally has been launched on 29.11.2021 and till date, more than 20,500 Life Certificates through face authentication have been done. Similarly, he informed that as on date total number of DLCs submitted by the Central Government Pensioners is around 1,07,75,980 /- since 2014. In 2021 total DLCs submitted till date is 19,80,977.

Dr Jitendra Singh said that the ‘Bhavishya’ platform, an integrated online pension processing system is at present being successfully implemented in the main Secretariat of 96 Ministries/ Departments including 813 Attached Offices. As on date, more than 1,50,000 cases have been processed ie. PPOs issued which includes more than 80,000 e-PPOs. The Minister also informed that Bhavishya 8.0 released in August, 2020 with a new feature to PUSH the ePPO in Digilocker. Bhavishya’ is the first application to use the Digilocker Id based PUSH Technology of Digilocker.

Dr Jitendra Singh directed the officials to create widespread awareness of the initiatives for the welfare of pensioners through official and social media channels.

Dr Jitendra Singh said, the earlier Pension Rules were notified 50 years ago in 1972. Since then, a large number of amendments to the CCS (Pension) Rules, 1972 have taken place. He said, in the light of such changes and several office memoranda clarifying different provisions of these Rules, the Department has brought out a revised and updated version of the Rules i.e. Civil Services (CCS) (Pension) Rules, 2021.

Dr Jitendra Singh clarified that the revised Rules do not make any changes in regard to entitlement of amount of pension, family pension or gratuity. However, the new Rules bring about several new policy and procedural improvements over the Central Civil Services (Pension) Rules, 1972. Also, some provisions in the old rules, which have become redundant over a period of time, have been omitted from the new Rules, the Minister added.

Secretary, Department of Pension & Pensioners' Welfare, Shri V Srinivas also spoke about the recent reforms and initiatives of the Department.

ON THE AUSPICIOUS OCCASIONS OF

Published by Confederation State Committee, chronicles the life, journey and contributions of our beloved leader Com. M Krishnan to the trade union movement.

Special Launch of the book in all districts will be done in a grand manner shortly.

Supply of the book will be done soon after the Special Launch in Districts. 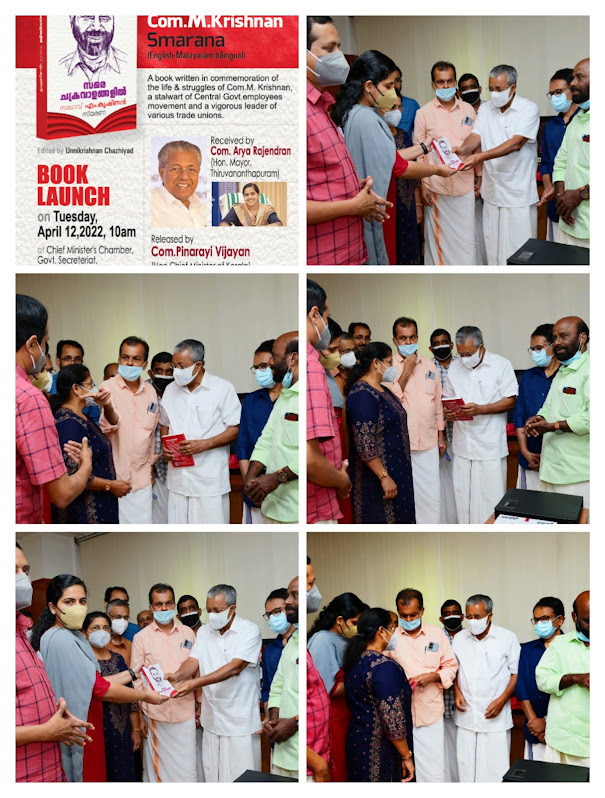 FIRST CONFERENCE OF ALL INDIA POSTAL AND RMS PENSIONERS ASSOCIATION DELHI STATE ON 11.04.2022 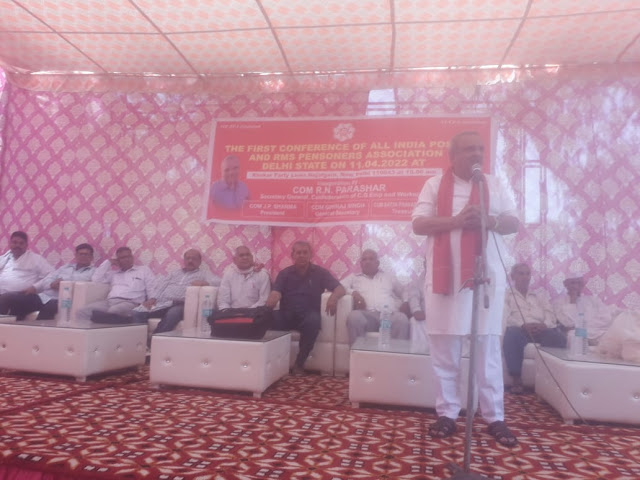 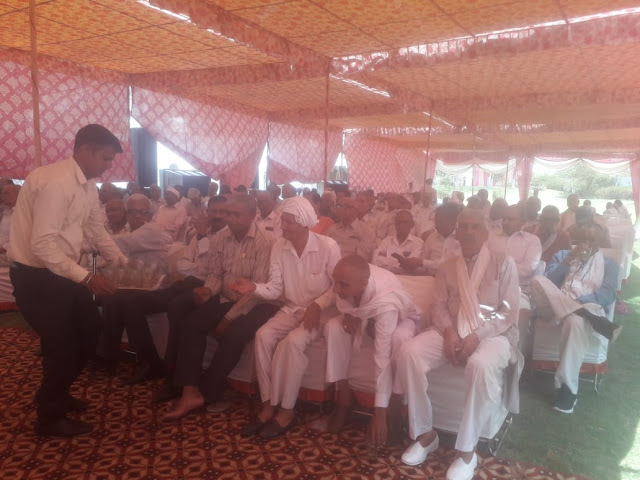 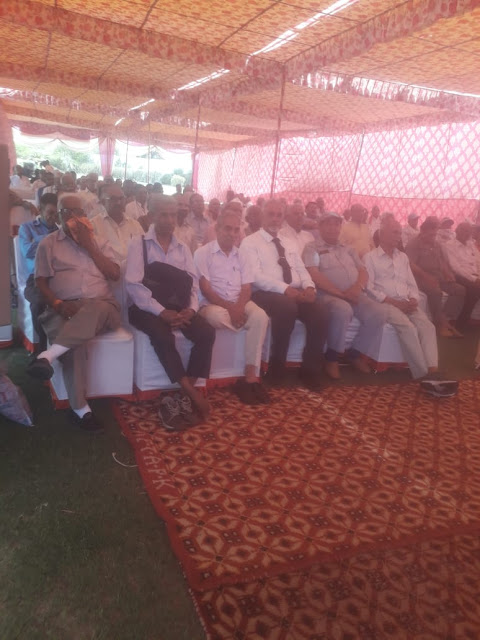 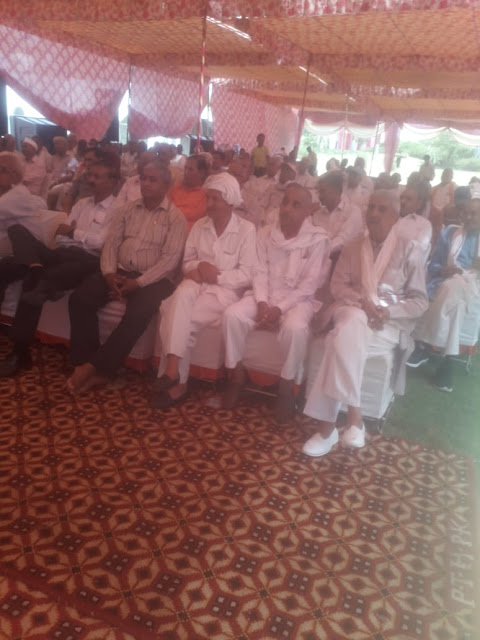 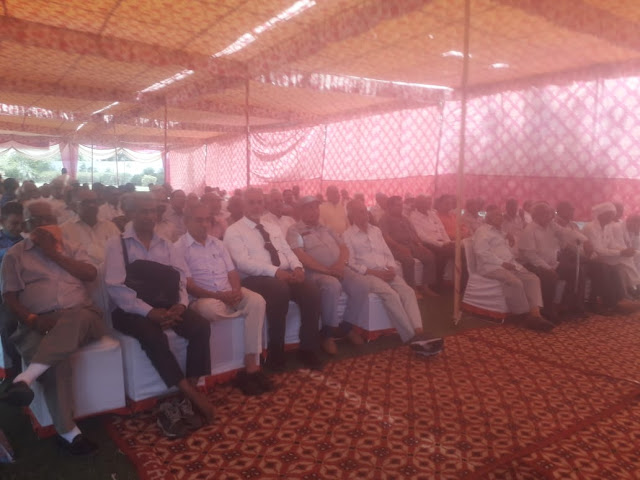 ON THE AUSPICIOUS OCCASION OF RAM NAVAMI

AUTHORIZATION OF KOTAK MAHINDRA BANK FOR DISBURSEMENT OF PENSIONS \

PAYMENT OF DEARNESS ALLOWANCE TO GRAMIN DAK SEVAKS (GDS) EFFECTIVE FROM 01.01.2022 ONWARDS    (CLICK THE LINK BELOW TO VIEW)

Subject: Recovery of excess payment made to pensioners

Attention is invited to the Reserve Bank of India’s circular dated 21st January, 2021 regarding withdrawal of circulars on Recovery of excess pension made to pensioners. The RBI decided that the following circulars issued by the Department of Government and Bank Accounts, Reserve Bank of India related to recovery of excess pension made by agency banks stands withdrawn from effect from the date of the circular-

It was further stated that agency banks will seek guidance from respective Pension sanctioning Authorities regarding the process to be followed for recovery of excess pension paid to the pensioners, if any.

The Department of Pension and Pensioners’ Welfare has clarified (copy enclosed) that the question of recovery or waiver of recovery of any excess payment on account of an error in initial authorization or revision of pension by the office is to be dealt with in accordance with rule 66 (4) of the CCS (Pension) rules 2021.

This issues with the approval of the Chief Controller (Pensions).

NOMINATION BY PENSIONERS UNDER THE PAYMENT OF ARREARS OF PENSION (NOMINATION) RULES, 1983 FOR PAYMENT OF LIFE-TIME ARREARS

32ND MEETING OF STANDING COMMITTEE OF VOLUNTARY AGENCIES (SCOVA) UNDER THE CHAIRMANSHIP OF HONOURABLE MOS(PP) ON 12.04.2022 FROM 11 AM ONWARDS - NEW AGENDA ITEMS

Revised rates of Dearness Allowance to the employees of Central Government and Central Autonomous Bodies continuing to draw their pay in the pre-revised Pay Scale/Grade Pay as per 5th Central Pay Commission from 01.01.2022

Revised rates of Dearness Allowance to the employees of Central Government and Central Autonomous Bodies continuing to draw their pay in the pre-revised Pay Scale/Grade Pay as per 6th Central Pay Commission from 01.01.2022

SOP FOR SYSTEM BASED ERROR BOOK

PROVISION OF SYSTEM BASED ERROR BOOK 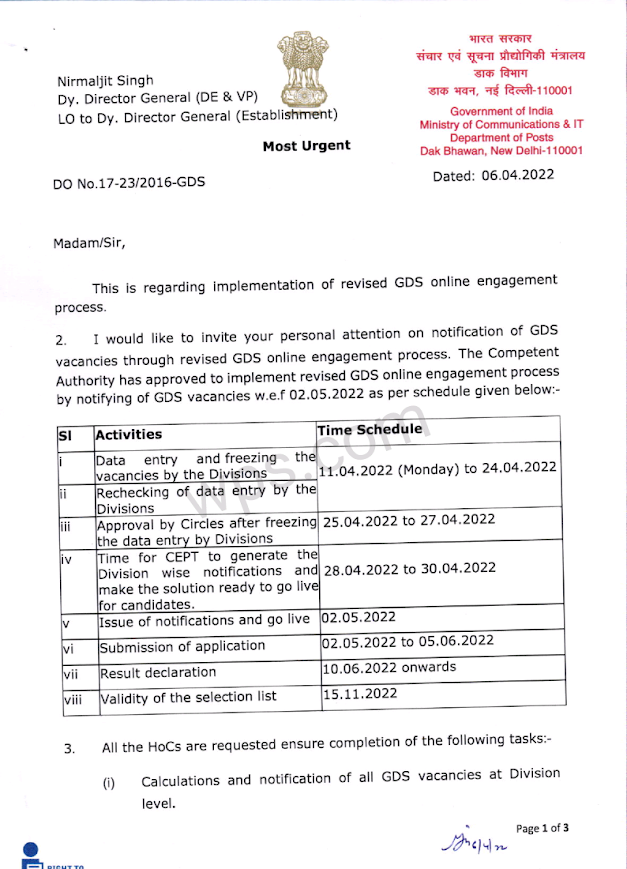 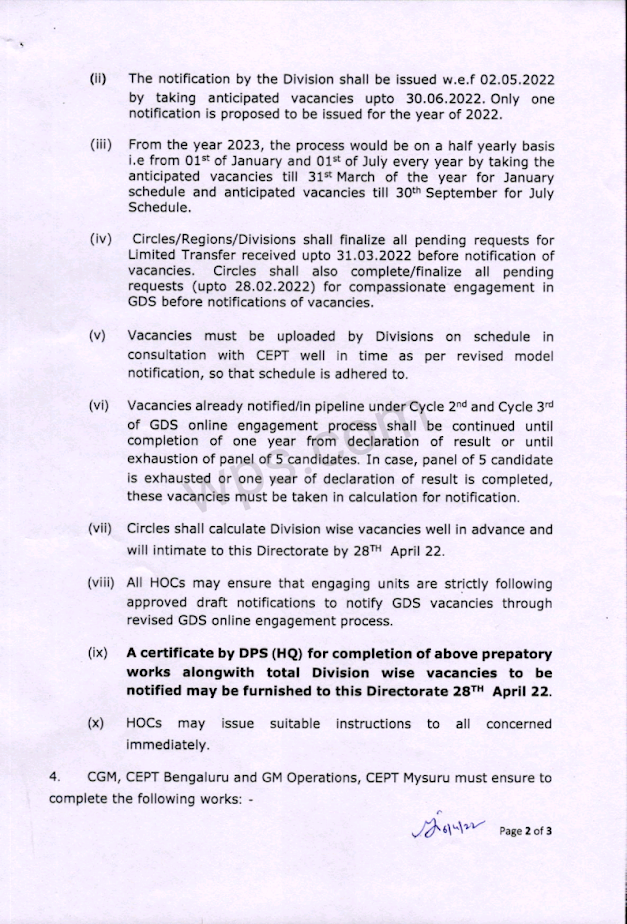 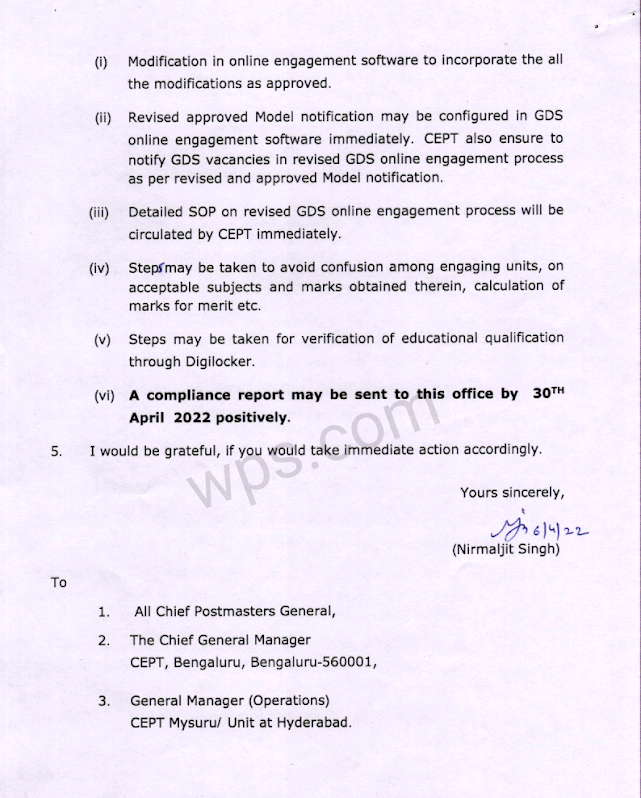 REVISION OF PATTERN AND SYLLABUS OF EXAMINATIONS CONDUCTED BY DEPARTMENT OF POSTS FOR APPOINTMENT TO THE POSTS OF MTS, POSTMAN AND MAIL GUARD 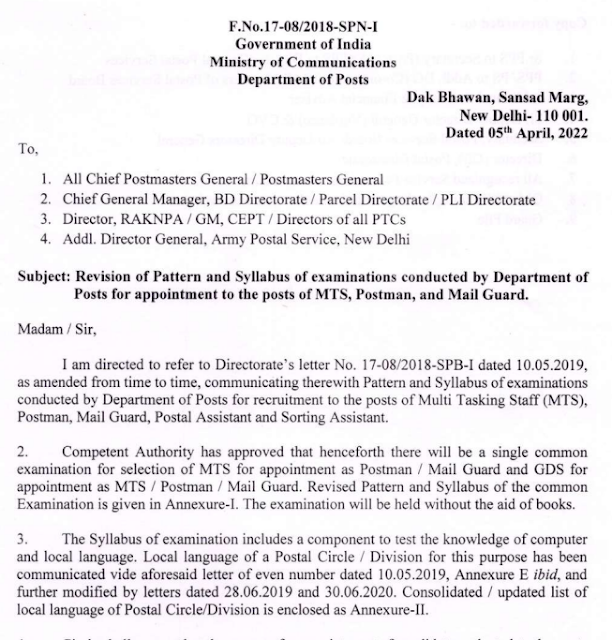