The sixth CPC in para 1.2.13 of its report under the caption “Cadre Review” made the following observations – “Accordingly, as a matter of policy, the commission refrained from undertaking specific cadre reviews, that in any case need to be carried out within an institutional frame work”. Govt. of India has accepted the above recommendations of the Sixth CPC. Subsequently the Govt. has issued detailed instructions to all Ministers and Departments to undertake the process of Cadre Restructuring within their institutional frame work.

Accordingly, Cadre restructuring committees are constituted in most of the departments with the representatives of the staff-side. In Railways, the process is completed and waiting for approval of the Ministry, in Income Tax the proposal is awaiting Cabinet approval, in Central Secretariat orders in respect of certain cadres already issued. In many other small departments also the process is nearing completion.

In the Postal department the cadre restructuring of Group-C, Postmen, Mail Guard and MTS is long overdue. Department and Govt. implemented many cadre restructuring schemes for    Group- A and Group-B cadres. In the Group-C, Postman, Mail Guard & MTS cadre, the supervisory responsibilities are totally undermined after the introduction of TBOP and BCR scheme. The then existing Supervisory structure in each cadre was not properly nurtured and not improved to carry out the higher Supervisory responsibilities in tune with the changing technology. The supervisory posts in certain cadres are totally dismantled. There is absolute justification for restructuring the entire cadres. But the attitude of the Postal Board is totally negative despite several written assurances.

The Staff-side comprising NFPE and FNPO raised the issue of cadre restructuring in the charter of demands for the indefinite strike from 13.07.2010 In the marathon discussion held on 12.07.2010, the Secretary, Posts assured as follows in the minutes – “A committee comprising DDG (Estt.), DDG (P), and Director (SR) and three members of the Staff side, to be nominated by them, will be constituted to examine proposals in detail and submit recommendations. The entire process is to be completed before the close of the year i.e., 31-12-2010”. Again during the strike charter discussion on 01-07-2011, the Secretary, Posts gave the following assurances in the minutes – “The demand of the staff-side regarding cadre restructuring was discussed and the Chairperson agreed to reconstitute the committee under the Chairmanship of DDG(P), the Committee will finalize the proposals before 31-08-2011. Again on 12-01-2012 the Secretary, Posts assured that – “the Staffside expressed their concern about undue delay in finalization of the proposal on which the Chairperson desired finalization of this process by 31st March, 2012. It was assured that timelines would be adhered to”.

As regards restructuring of Postal Accounts it was informed that the proposal was cleared by JS & FA and stands referred to Secretary, Posts. It was also decided to have a separate Committee for MMS staff under the Chairmanship of Ms. Sandhya Rani, PMG(BD), Andhra Circle and with Director (MV) as other official members. The staff side members are also included. The committee was directed to submit its report within three months.

Assurances after assurances are given by none other than Secretary, Posts but nothing materialized. Finally as an insult to injury, the cadre restructuring proposal of Postal Accounts which is already been finalized by the Committee is returned to the PA wing of the Directorate after keeping the file pending for more than one year, stating certain irrelevant issues which has no relevance on the cadre restructuring proposal of Postal Accounts Staff. Similarly, in the status Report on the items included in the memorandum submitted by the Postal JCA on 01-04-2013, it is informed as follows : “DDG(P), Chairman of the Committee informed that he has submitted his report on 06-11-2012 to the DDG (ESTT.). He has been requested to submit full report with enclosures duly signed by the Committee Members….!!!!! Nothing is mentioned about the Postal Accounts wing. Regarding MMS, it is informed that the report is submitted is under process. All the cadres including PA, SA, Postman, Mail Guard, MTS, Admn. Staff, Postal Accounts, MMS, System Administrators, accountants, Postmasters cadre, SBCO etc., are all eagerly waiting for the outcome of the cadre restructuring.

Thus it can be seen that the lethargic and indifferent attitude of the Official side members of the Committee and the unhelpful attitude of the Postal Board is the root cause of the delay.

Even though the new Secretary, Posts after taking over charge has assured that action will be taken for  expediting the finalization of the cadre restructuring proposals, nothing seems to be moving. A situation has arisen wherein the employees can not be allowed to suffer any further. The Postal JCA has viewed the situation with grave concern and shall embark upon serious agitational programmes including non-cooperation, if the authorities till try to drag on the issue on one pretext or other. NFPE Federal Council to be held at Hyderabad from 9th to 12thJune 2013 shall also review the entire situation and take appropriate decision for a united action.

A meeting of the representatives of Staff Side National Council with Secretary, Pension AR & PG on pensionary matters was held on 28.5.2013. Staff Side was represented by S/ Shri S.G. Mishra and Rakhal Das Gupta (AIRF), Guman Singh (NFIR) and K.K.N.kutty and S.K.Vyas (Confederation)

The following issues have been discussed

1.      Ex-gratia Payment to SRPF / CPF beneficiaries who had voluntarily retired or medically invalidated. It has been decided to implement the Kerala High Court judgment in general and extend the benefit of exgratia payment to the meagre number of pre 1986 optees who retired voluntarily or on medical invalidation after rendering 20 years of service. The enabling orders are to be issued shortly.

2.      Raising quantum of ex-gratia to CPF retirees on lines of SRPF.

In the case Civilian departments about 4 lakhs of cases reported pending on 1.8.2012, now only 1.30 lakhs are pending and these would also be cleared by 30.6.2013.In the case of Railways total pendency in August 2012 was 10.8 lakhs which has been brought down to 5.54 lakhs. Now when it has been decided that revised PPOs may be issued suo mottu by the Railway authorities, the entire pending is targeted to be cleared by 30th September 2013.In the case of Defence civilians, action is being taken to issue all pending PPOs by 30.9.2013.

4.      Fixation of revised pension by multiplying pre-revised 1/3rd pension (in  respect of PSU absorbees) by a factor of 2.26.In the case the speaking order issued by the Govt. on 26.11.2012 that no further increase in pension of absorbee pensioners would be allowed has been challenged in CAT Hyderabad and the Tribunal has passed orders on 24.4. 2013. This order is under examination.

5.      Commutation of Pension.
The Govt. have not agreed to reduce the period of 15 years to 11 years for restoration even in the cases where commutation has been paid at the rates prescribed in the New Table. The Govt. wanted that the matter may be raised before 7th pay commission.

6.      Family pension to divorced / widowed / unmarried daughters –nomination for life time arrears by the family pension in respect of his / her daughter. This has not been agreed to.

7.      Non payment of arrears of pension on account of Revision of pension w.e.f. 1.1.2006 in case of pensioner of Chandrapur. Now these arrears have been disbursed by all Banks.

As recommended by IV CPC the following rates of Death Gratuity had been provided for:-

The Govt. has not agreed and have suggested that the matter may be raised before the next Pay Commission.

The Health Ministry has agreed to extend CS (MA) Rules, 1944 to Pensioners. In many cases which had gone to Court, it has been ruled that pensioners are entitled to full reimbursement of medical expenses incurred by them as per CS (MA) Rules 1944 which are applicable in the case of serving employees. The Department of Expenditure has not agreed to implement the above decision. The pensioners have to wait till the Medical Insurance Scheme is introduced.

III. Grant of modified parity with reference to the Revised Pay Scale corresponding to pre revised Pay Scale of the post from which an employee had retired. The Govt. cited the decision of Supreme Court in K.S. Krishna Swamy Vs UOI (C.A. no.3173-3174/2006 and 3188-3190/2006). According to this the benefit of up-gradation of post subsequent to their retirement would not be admissible to pre 1996 / pre 2006 retirees.

The Staff Side pointed out that the result of this clarification is that a retiree is now being compared with the pay scale of an employee two stages lower and subordinate to the post from which an employee has retired. If V IV CPCs have consciously upgraded certain posts it is established that pay scales granted for these posts were in adequate and only therefore the up-gradation has been recommended by them. On what ground the benefit of up-gradation even in determining the modified parity be denied to them when it is established that theyretired from a pay scale which were inadequate.

However Govt. did not agree to reconsider this matter.

The meeting ended with a vote of thanks.

With greetings,
Yours fraternally, 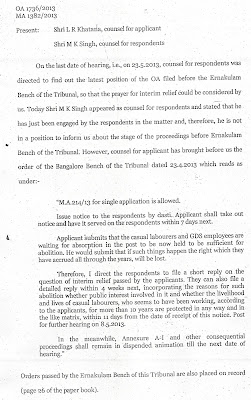 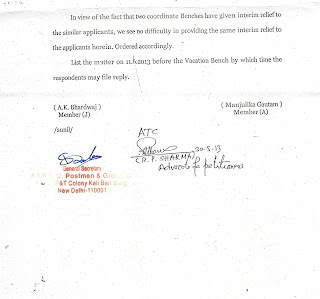 STAY GRANTED BY CAT (P.B) DELHI AGAINST ABOLITION OF POSTS OF POSTMEN & MTS.
Department of Posts ordered abolition of 17093 posts of various cadres. Out of which about 7500 posts were related to Postmen & MTS. AIPE Union Postmen & MSE/Gr. ‘D’ filed a case No. 1736/21.05.13 in CAT (P.B) Delhi along with NUPE Postmen & MTS and AIPEU GDS (NFPE). The Hon’ble CAT Delhi has granted stay against the abolition of posts of Postmen & MTS.
Next date of hearing is fixed as 11.6.2013.
Orders will be exhibited in web-site on receipt.

If there is any imposition of orders of abolition of posts in any Circle. They can take up the matter with the authorities concerned on the basis of CAT (PB) Delhi orders.
Posted by All India RMS & MMS Employees Union - Group 'C' at 2:11:00 PM

Draft Triennial report of National Federation of Postal Employees for the period from June 2010 to May 2013 placed before the Federal Council held at Hyderabad (Andhra Pradesh)
from 09.06.2013 to 12.6.2013

S B ORDER NO. 9 / 2013 - INTRODUCTION OF "BASIC SAVINGS ACCOUNT" UNDER POST OFFICE SAVINGS ACCOUNTS RULES, 1981 TO FACILITATE OPENING OF ZERO BALANCE ACCOUNTS BY BENEFICIARIES OF ANY GOVERNMENT WELFARE SCHEME – REGARDING(CLICK HERE FOR DETAILS)

Subject: Grant of one increment in pre-revised pay scale - OM dated 19.3.2012 - clarification regarding.

The undersigned is directed to invite a reference to this Ministry’s Office Memorandum of even no. dated 19.3.2012 which provides that those Central Government employees who were due to get their annual increment between February to June during 2006, may be granted one increment as on 1.1.2006 in the pre-revised pay scale as a one time measure and, thereafter, will get the next increment in the revised pay structure on 1.7.2006.

3.         This Ministry has been receiving references as to whether in cases where the fitment table provides for the same revised stage in case of two consecutive pre-revised stages in a particular pre-revised scale of pay, the benefit of bunching is admissible after grant of one increment in the pre-revised pay scale by virtue of this Ministry’s OM dated 19.3.2012.
4.         The matter has been considered and it is clarified that Fitment Table contained in the aforesaid OM dated 30.8.2008 is to he strictly followed for fixation of pay in the revised structure without any deviation.

1.      Postal Board has sent the proposal for introducing Health Insurance Scheme to GDS, to Finance Ministry for approval.
2.      GDS Bonus ceiling limit raising – Finance Ministry has again returned the file with adverse comments.
3.      Casual Labourers Committee recommendations have been considered by the Postal Board and proposal of the Postal Board is being sent to Finance Ministry for approval. Kerala CAT also directed the Department to communicate its decision on the Casual Labour committee’s recommendations to the CAT.
Mass Dharna will be conducted in front of allDivisional offices on 28.05.2013 demanding immediate settlement of GDS demands. The Dharna will be organized by AIPEU-GDS (NFPE) and NFPE.