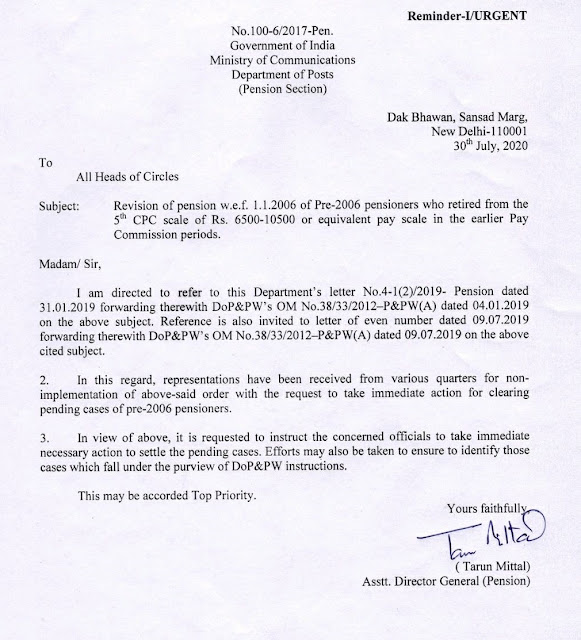 RELAXATION OF RULE 80-A FOR PAYMENT OF PROVISIONAL FAMILY PENSION ON DEATH OF A GOVERNMENT SERVANT DURING SERVICE. (DATED 29/07/2020)  (Click the link below to view the Order)

GRANT OF DISABILITY PENSION, COMPRISING SERVICE ELEMENT AND DISABILITY ELEMENT TO PRE-2006 DISABILITY PENSIONERS, WHO WERE BOARDED OUT FROM SERVICE, WITH LESS THAN 10 YEARS OF QUALIFYING SERVICE, DUE TO AN INJURY/DISABILITY, ATTRIBUTABLE TO GOVT. SERVICE. (DATED 28/07/2020) Click the link below to view the Order)  http://documents.doptcirculars.nic.in/D3/D03ppw/EOP_28072020ucOCR.pdf

PROVISIONAL RELEASE OF RETIREMENT BENEFITS AS PER RULE 64 OF CCS (PENSION) RULES, 1972 DURING COVID PANDEMIC TIME 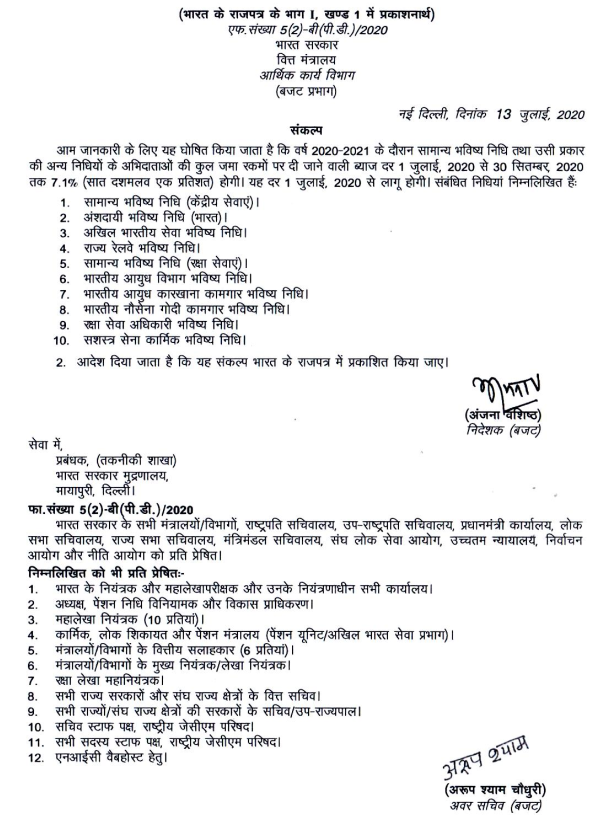 REVISION OF 'SCHEDULE OF ENGAGING AUTHORITY, DISCIPLINARY AUTHORITY AND APPELLATE AUTHORITY FOR BPMS AND ABPMS DAK SEVAKS UNDER RULE 31 OF GDS (CONDUCT AND ENGAGEMENT) RULES, 2020 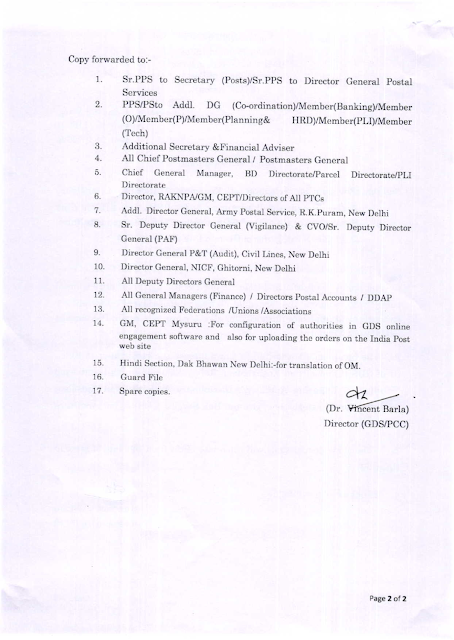 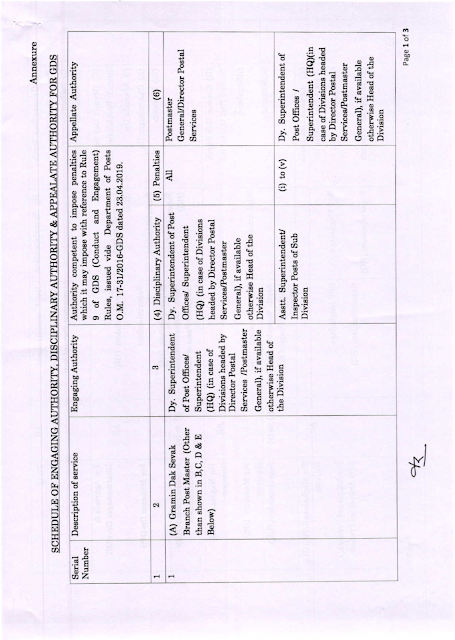 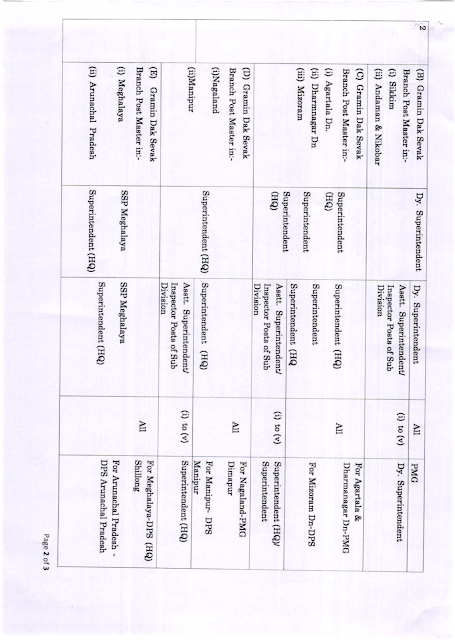 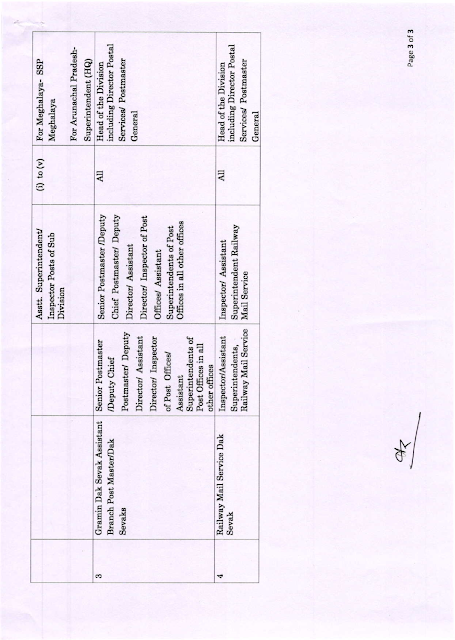 Posted On: 27 JUL 2020 6:35PM by PIB Delhi
Government employees retiring during COVID pandemic will be receiving “provisional" pension till their regular Pension Payment Order (PPO) is issued and other official formalities completed.
Union Minister of State (Independent Charge) Development of North Eastern Region (DoNER), MoS PMO, Personnel, Public Grievances, Pensions, Atomic Energy and Space, Dr Jitendra Singh said that after the Modi Government took over, the Department of Pensions had upgraded and equipped itself to deliver the PPO to the concerned employee without delay on the day of his or her superannuation. Besides this, in the last few years, taking cue from Prime Minister Narendra Modi’s emphasis on digitalization, the Department of Pension also created a Portal, which could be accessed by any government employee approaching superannuation to find out the status of his or her pension papers, he said.
However, because of the disruption in the official work due to COVID pandemic and lockdown, Dr Jitendra Singh said, some of the employees who had retired during this period may not have been provided with PPO. But, as an evidence of the present government's sensitivity towards the pensioners and the senior citizens, a decision was taken that in order to avoid a delay in the start of regular pension covered under CCS (Pension Rules) 1972, the rules may be relaxed to enable seamless payment of “Provisional Pension” and “Provisional Gratuity” till the regular PPO is issued.
As per the OM (Office Memorandum) issued by Department of Pensions, affiliated to the Ministry of Personnel, the payment of “Provisional Pension” will initially continue for a period of six months from the date of retirement and the period of “Provisional Pension” may be further extended up to one year in exceptional cases. These instructions shall also be applicable in cases where a government servant retires otherwise than on superannuation i.e. voluntary retirement, retirement under FR 56, etc.
Dr Jitendra Singh said, this decision has been taken considering that because of the constraints of pandemic and lockdown, a government servant may find difficulty in submitting his Pension Forms to the Head of Office or may not be able to forward the Claim Form in hard copy along with Service Book to the concerned Pay & Accounts Office in time, particularly when both the offices are located in different cities. This is very pertinent to Central Armed Police Forces (CAPFs) who are constantly on the move and whose Heads of Offices are located in cities different from where the Pay & Accounts Office is located.
Vide another circular, Department of Pension & Pensioners' Welfare (DOPPW) has directed all offices maintaining GPF (General Provident Fund) Accounts to complete all credit entries including accruing interest to the employees two years before retirement and then one year before retirement so that Provident Fund is also paid accurately in time.  (Release ID: 1641560) 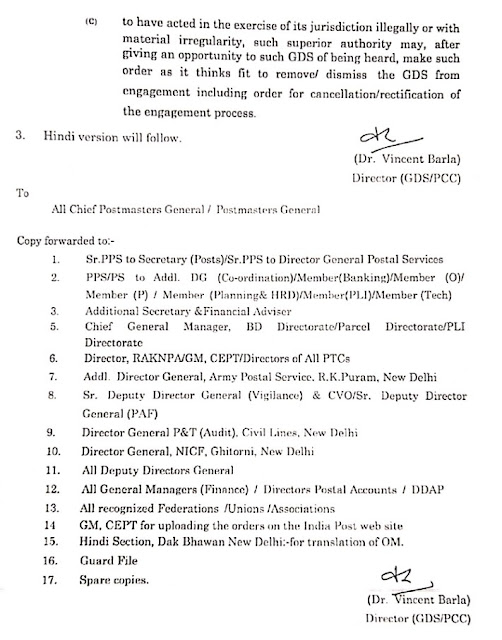 Posted On: 24 JUL 2020 4:12PM by PIB Mumbai
Mumbai, 24 July 2020
With the Raksha Bandhan festival round the corner, India Post, Mumbai has launched a special kind of envelope to carry rakhis to deliver them to their destinations in minimum time period.   The envelope is a non-tear, water-resistant self-adhesive envelope with interplay of vivid colors throughout.  Reasonably priced at Rs 10, these special envelopes will be available in all the post offices from Saturday, July 25th. 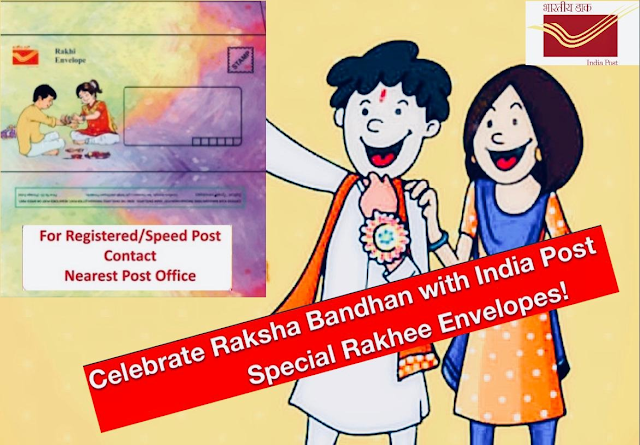 “These envelopes bearing distinctive characteristics are an innovative attempt of India Post, Mumbai, to keep the spirit of love and festivity unabated, even at times of crisis and to strengthen the emotions of love and brotherhood amongst people” said Ms Swati Pandey, Postmaster General, India Post, Mumbai. She further said that all mails of Raksha Bandhan will be treated as first class mail, helping them reach their destination before/on the day of the occasion, by latest, at the cost of an ordinary mail. The colourful design of the envelopes will facilitate its easy identification and aid quicker transmission.  “Even during this critical period of partial lockdowns and challenges, India Post will ensure that all mails related to Raksha Bandhan reach their destinations”, the Post Master General added.
Similar special envelopes have been introduced in other postal circles as well.
* * *
DJM/ST/DR (Release ID: 1640910)
Posted by All India RMS & MMS Employees Union - Group 'C' at 1:28:00 PM 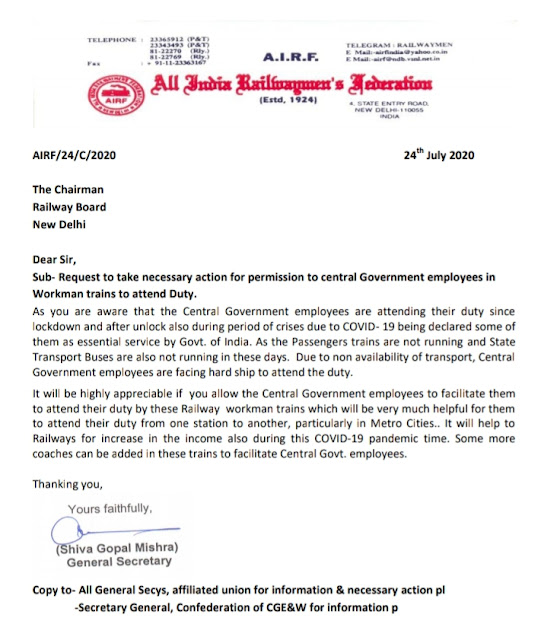 PAYMENT OF CGHS CONTRIBUTION THROUGH BHARATKOSH PORTAL
(CLICK THE LINK BELOW TO VIEW)
https://cghs.gov.in/showfile.php?lid=5806 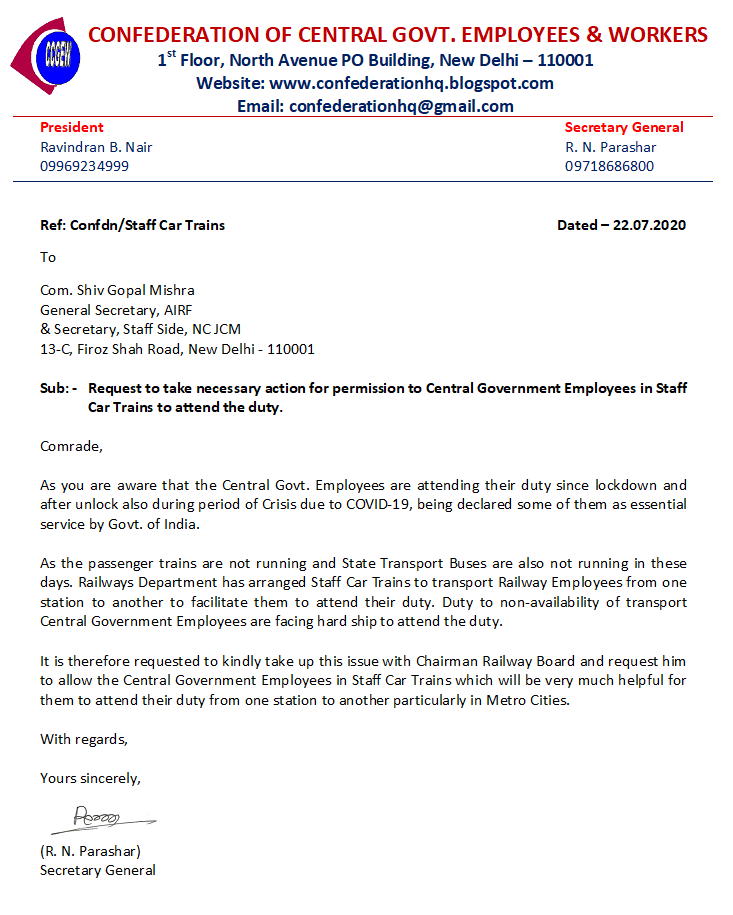 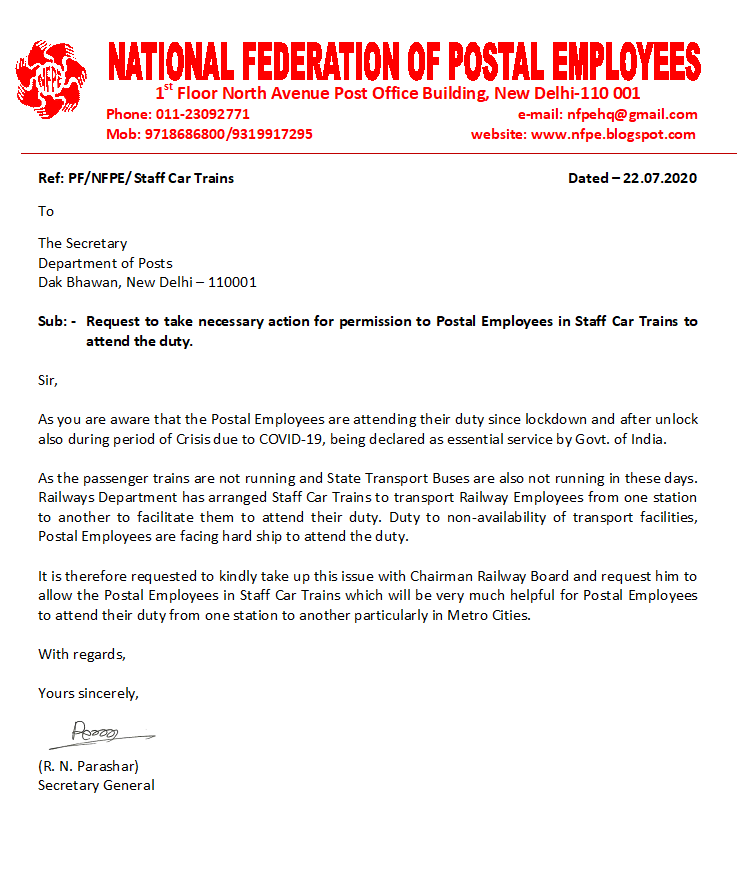 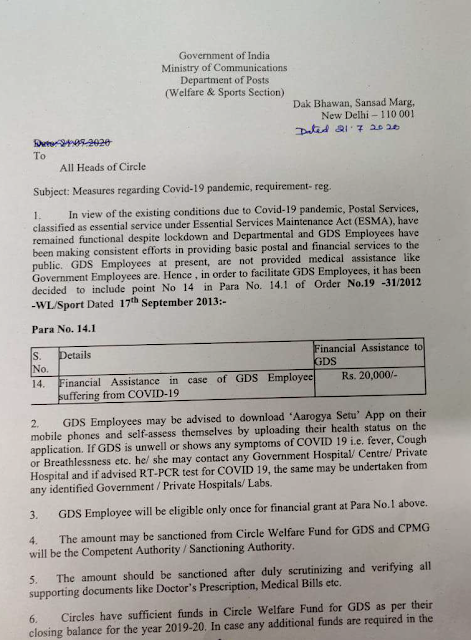 GAZETTE NOTIFICATION FOR DRAFT CODE ON WAGES (CENTRAL) RULES, 2020 (CLICK THE LINK BELOW TO VIEW THE NOTIFICATION) 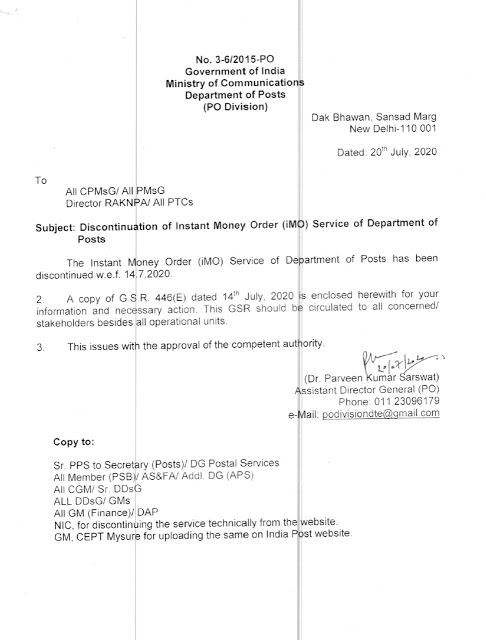 PROVISIONAL RELEASE OF RETIREMENT BENEFITS AS PER RULE 64 OF CCS (PENSION) RULES, 1972 DURING COVID PANDEMIC TIME.
(CLICK THE LINK BELOW TO VIEW)
http://documents.doptcirculars.nic.in/D3/D03ppw/Rule64_17072020jQRuU.pdf 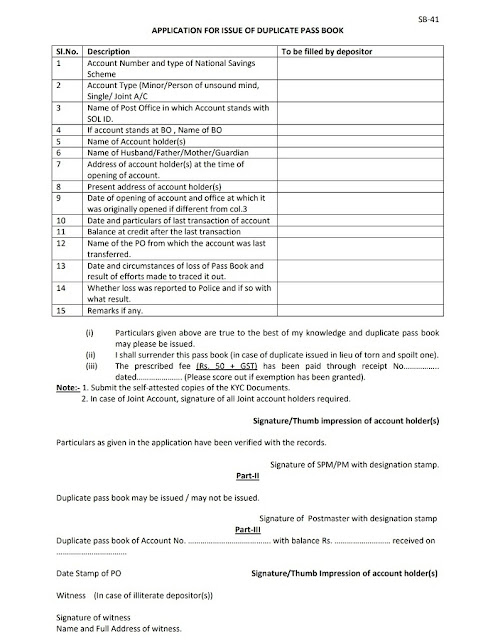 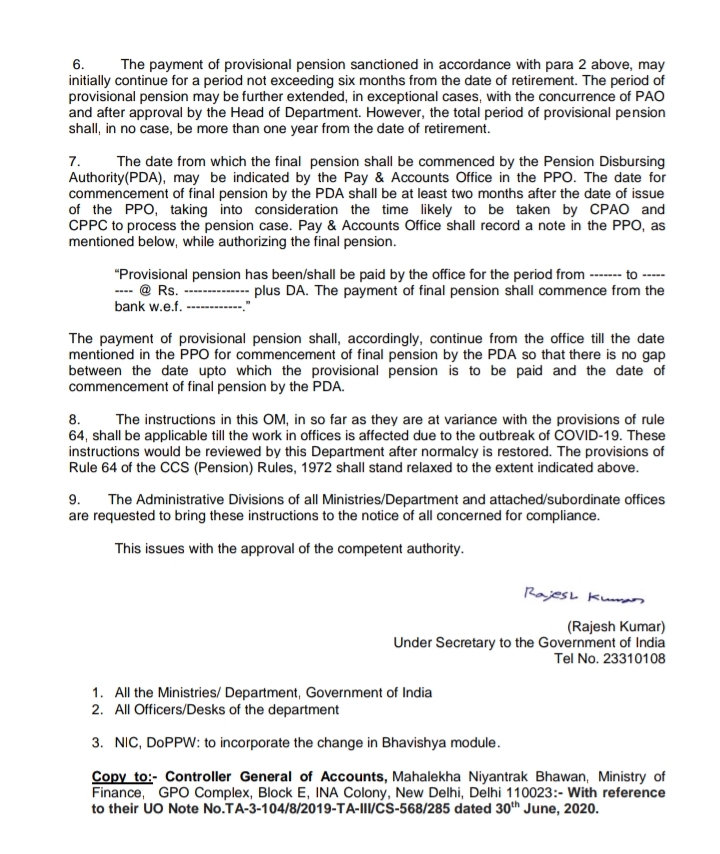 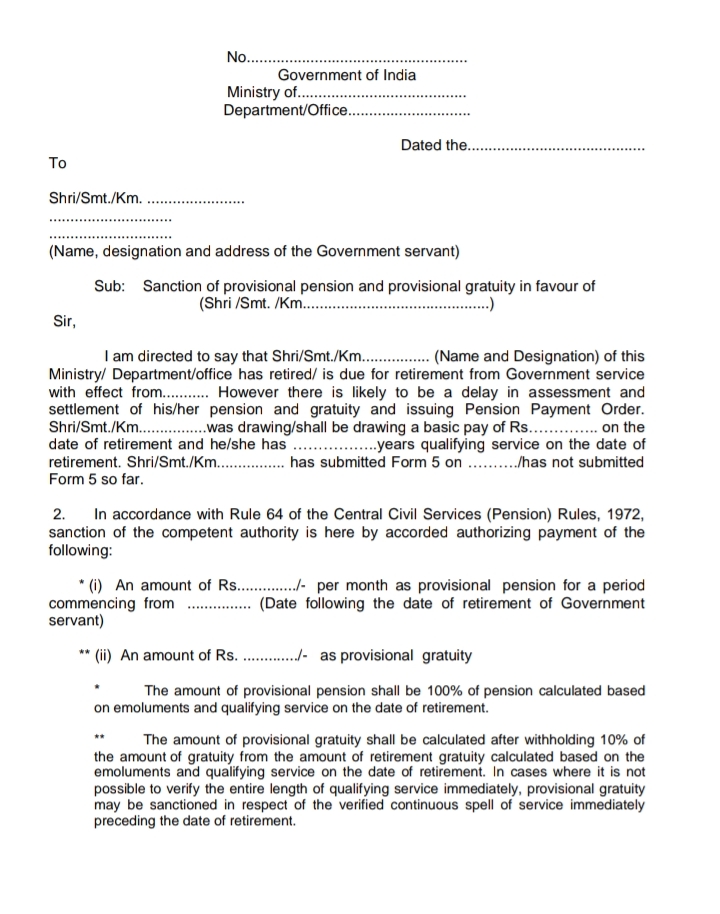 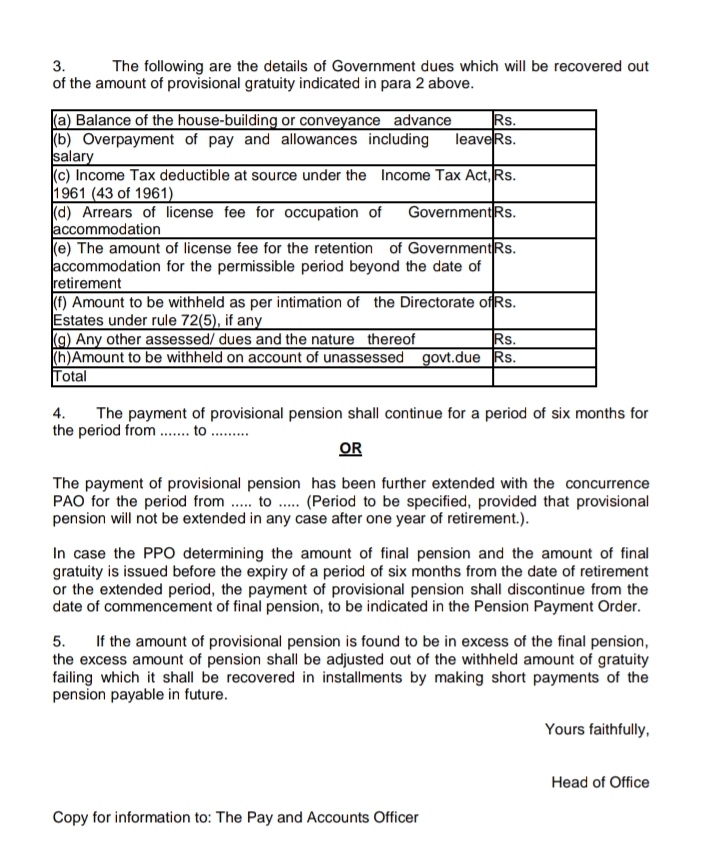 EXAMINATIONS FOR RECRUITMENT OF MTS FROM ELIGIBLE GDS FOR YEAR 2020-POSTPONEMENT REGARDING. 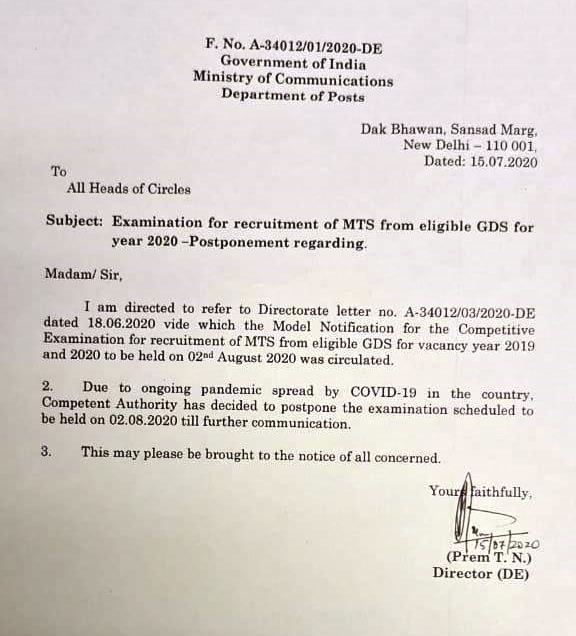 1.    The claim is preferred on the form Appendix ‘A’ to AO 30/89
2.    The claim has been signed by the officer himself and countersigned by the Controlling Officer mentioned in Rule 6 of TR 2014.
3.    The claim is receipted by the Officer.
4.    Full details of family members (i.e. Name, Age, Relation etc) are filled in the claim.
5.    Dependency certificate mentioning income, for Father / Mother and children more than 21 years is enclosed.
6.    Details of leave sanctioned are mentioned on the claim, if officer is availing the LTC. Enclose the copy of Leave Certificate/ Leave DO II.
7.    All the Air / Railway tickets along with boarding pass are attached with the claim in original. Wait listed tickets of railway are not admissible for LTC, get confirmation of the same signed over the stamp by TT / Railway Auth.
8.    The adjustment claim is submitted within 30 days from the date of completion of return journey. Prefer separate claims for Self and Family if moves have taken place on different dates. If claim for any family member will be submitted at latter date mention the same.
9.    The details of advances taken for the move are invariably mentioned in the Tickets purchased through DTS (Air/Rail) should be treated as advance and incorporated in the claim by adding in the total amount claimed as well as in advances for proper adjustment.
10. The air tickets must be booked through Booking Counter/direct website of operating air line or through Govt. Authorised travel agents i.e. Balmer & Lawrie, Ashok Travels or IRCTC. Tickets booked through private agencies or private websites like com, yatra.com, Udchalo etc are not admissible.
11. Air Tickets booked should not be more than LTC 80 fare. Officer can book tickets for lowest fare available on the date of booking which also should not be more than LTC 80 rates.
12. Onward and return journey should be done in the same chronology and claim of return journey first & onward journey at latter date is not
LTC to Home town 177 A
13. The Officer and his dependant family members can travel from duty station to home town once in year.
14. Officer posted in field area can travel from duty station to his home town or Family members residing at SPR can travel from SPR to home town.
15. Officer and family members can travel on different dates, however return journey of family members should be completed within six months only.
16. Home town declared by the officer at the time of commissioning is treated as his declared home town, if the same has been changed get it notified through DO part II.
17. Journey up to the home town has to be shown( may be under own arrangement) in the claim if same differs from NRS/ nearest Air Port for which claim has been preferred.
LTC to Anywhere in India 177 B
18. The Officer and spouse & children can travel from duty station to any station in India once in alternate year in which LTC to home town is not availed.
19. LTC under 177B is not admissible to parents and other dependent family members.
20. Officer and spouse & children can travel at different dates in batches but all the members have to visit the same station only. Return journey of family members must be within six months.
21. Officers posted in field area can travel from their duty station to visit station and their family members can travel from SPR/hometown to visit station.
22. Journey performed by circular routes is not admissible. Officer has to choose one destination and LTC is admissible from duty station to that destination by direct shortest route only.
LTC to Officer posted in field area 177C
23. The Officer posted in field area and not residing with the family are entitle to avail LTC 177 C from their duty station to home/SPR in addition to LTC 177A or 177B.
24. The LTC is not admissible to those Officers who have been allotted Govt Accommodation at field unit and are residing with the families.
LTC in lieu of Home Town
25. Officers and their family members may avail LTC in lieu of home town to visit any place in NER / Andaman & Nicobar / Jammu & Kashmir by forgoing home town LTC of that year.
26. Officers whose home town and place of posting is the same are not allowed to avail this LTC.
27. Similarly Officers who are serving in field area and their families are residing at home town, family of these are officers are not allowed to avail this LTC, as family do not have title for home town LTC.
28. Journey can be undertaken to J & K, NER, A&N by private airlines however fare will be restricted to LTC 80 fares only. Provisions of purchase of a ticket from authorised agent / Air Line are not relaxed.
29. LTC in lieu of home town can be split by family members, i.e. officer can avail LTC 177A to visit his home town /SPR and family residing at SPR can avail the LTC in lieu of home town to visit J&K, A&N, NER.
LTC for children studying and staying at hostel
30. Children of the officers staying in hostel can visit the duty station / home town of the officer during the vacation.
31. Claim is to be supported with certificate from Educational Institute regarding child is studying and stating in hostel.
32. LTC not admissible for journey performed for getting admission or leaving Institute after completion.
33. Children availing this concession are not entitled for other LTCs ( 177A or 177B )