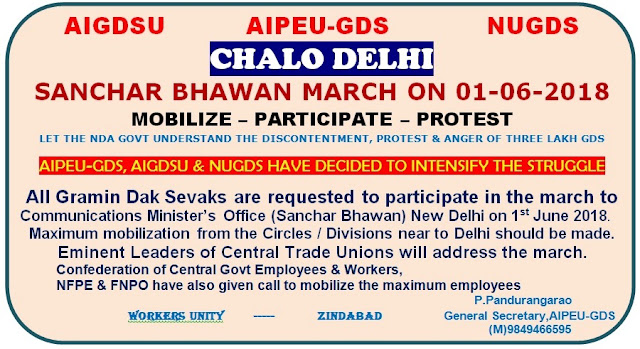 Posted by NFPE at 1:31 AM No comments: Links to this post

Postal Joint Council of Action(PJCA) comprising NFPE & FNPO, appeals to the entire rank and file of NFPE & FNPO to extend all solidarity, help and Cooperation for success of GDS Strike.

Rural postal employees across the country have been protesting for eight days, but the Narendra Modi-led central government seems to have turned a blind eye to their concerns

In a show of unity across the country, more than 2,70,000 postal employees in rural areas have been protesting across the country since May 22, demanding regularisation as government employees and implementation of the Kamlesh Chandra Committee reforms submitted in November 2016, but the government seems unperturbed by the indefinite strike or their demands.
The protest by Gramin Dak Sevaks’ (GDS) on Tuesday reached its eighth day, but “nothing concrete” has been done by the Narendra Modi-government, alleged All India Postal Employees Union—Gramin Dak Sevak (AIPEU-GDS). The strike has led to the shut down of more than 1,29,000 post offices across the country and the postal employees have declared an indefinite strike until their demands are met.
Gramin Dak Sevaks are extra-departmental agents recruited by the postal department to serve in rural areas. They have been demanding pay and facilities at par with regular postal department employees for years.
The Union Government had constituted a one-man Kamlesh Chandra Committee in the Seventh Pay Commission to study the wage structure of the rural postal employees and review and suggest changes in existing wage structures, facilities and other social security benefits provided to them.
The committee, had in its report, recommended the minimum wage of the rural postal officers be made ₹10,000 and a maximum of ₹35,480, the abolition of the 50 years age limit, an annual hike of 3% and a children’s education allowance of Rs 6,000 per annum. They had introduced a risk and hardship allowance of ₹500 per month for those working in the special areas. The Committee had increased the ex-gratia gratuity to ₹5,00,000 from ₹60,000, while also suggesting that the scope of the Circle Welfare Fund (CWF) scheme should include immediate family members.
“The government has been offering nothing to us. So, we are going to continue with the indefinite protest,” says P Pandurangarao, the General Secretary of AIPEU-GDS.
The government has been stating that they require at least three months to implement the suggested reforms. “But when they have done nothing in the past 18 months, we have no confidence in them anymore and that’s why we have demanded it in writing,” says Pandurangarao. “But they have refused,” added Pandurangarao.
“Even though we are government employees, our life is worse than daily-wage labourers,” says Pandurangarao, adding “we get no subsidies, no benefits and have no choice but to survive with a meagre salary. The government does not even provide us with basic facilities such as a house for an office or the electricity bill. It’s the head Post Master’s responsibility to arrange for a place for the ‘Dak Ghar’ (Post Office)”
Although GDS’ are central government employees, they are considered temporary employees which deprives them of various benefits such as the retirement benefit, pensions, etc. “After working for 35 to 40 years, we are given a meager retirement benefit of Rs.1,00,000. Our  per day salary is not more than Rs.300 and every year we get an increment of  Rs.50 to Rs.60. We get no other benefits,” Pandurangarao says. “How is it possible for us to survive like this,” he asks.
All India working president of AIPEU-GDS, Virendra Sharma says, “There have been at least five rounds of talks, but nothing conclusive has come out of it. Our demand is simple; implement the reforms suggested by the Committee constituted by you (the government). The protests have affected lives in rural India and we don’t wish to continue, but the government is simply not ready to listen.”
“On June 1, we will protest outside the Ministry of Communications’ office in New Delhi. We will not give in even if they turn a blind eye to us, they (the government) will have to listen to us,” says Sharma.
//copy//
Click Here to view the article

All General Secretaries, Circle Secretaries and Divisional/Branch Secretaries of NFPE Unions are requested to make all solidarity programmes in support of GDS Strike including one day Hunger Fast at all work places on 31st May 2018 and March to Sanchar Bhawan, Communication Minister' office on 1st June 2018 a grand success.

All nearby circles and Divisions are requested to participate in large number.

As you are aware the indefinite strike of GDS Unions (AIPEU-GDS, AIGDSU, NUGDS & BEDEU) entered the 8th day today. All India strike percentage is 96%. Five rounds of discussions held with Secretary, Department of Posts, Additional Director General, Posts and conciliation meetings of Regional Labour Commissioner failed due to the adamant and negative attitude of the Government and Department. As per the call of NFPE and all affiliates of NFPE, departmental employees in Postal department organised black badge campaign and protest demonstration as solidarity support to the GDS strike. In five states (Kerala, Tamilnadu, Andhra Pradesh, Telangana and West Bengal) departmental employees also organised solidarity strike eventhough in four states (Tamilnadu, Andhra Pradesh, Telangana and West Bengal) they have withdrawn the solidarity strike on the fourth day due to compelling reason. In Kerala departmental employees of NFPE and FNPO are continuing their strike. In all states including those states where the departmental employees have withdrawn the solidarity strike, 100% GDS employees are continuing their strike.

Confederation of Central Government employees & Workers has already given call for daily demonstration in front of Postal and RMS offices and also extend full support and solidarity to the strike.
As the strike is continuing Confederation National Secretariat and NFPE Federal Secretariat has decided to organize mass hunger fast in front of major Post office/RMS offices on 31st May 2018 Thursday from 10 AM to 5 PM. It is also decided to mobilise maximum number of employees from Delhi and nearby states in the Sanchar Bhawan March already announced by the striking GDS Unions on 1stJune 2018 Friday at 10:30 AM.

All affiliates and State/District Level Coordinating Committees of Confederation and NFPE are requested to organize the above mentioned programmes in an effective manner with biggest participation of employees. 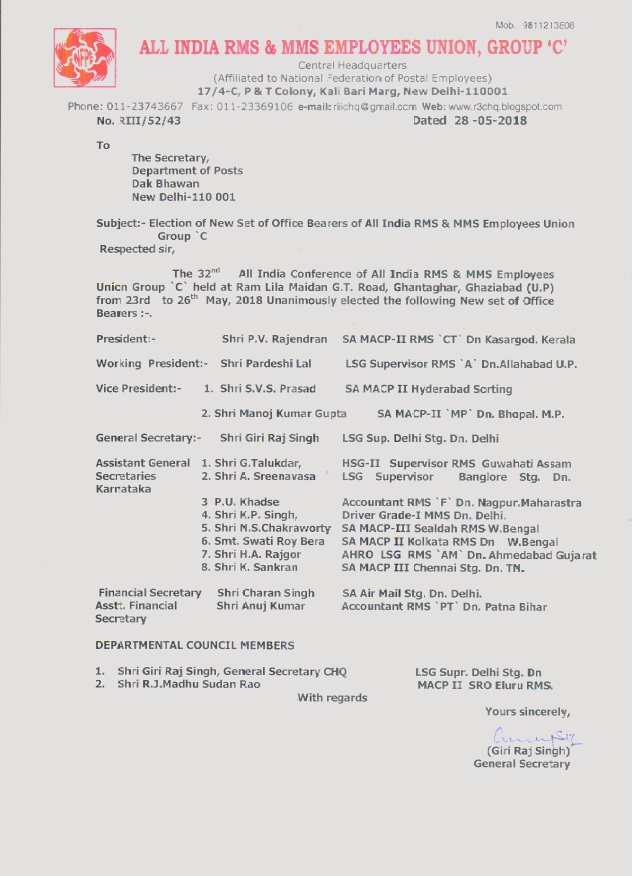 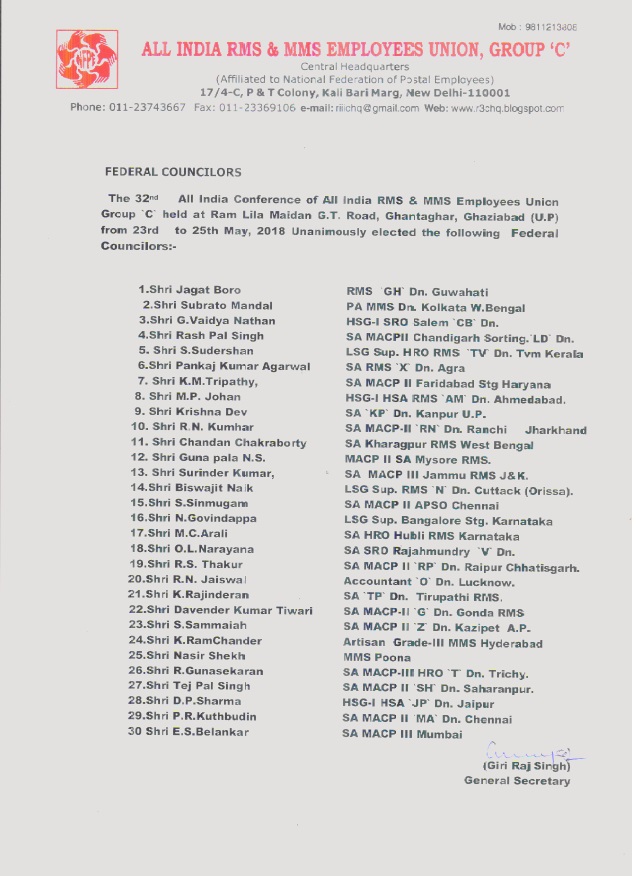 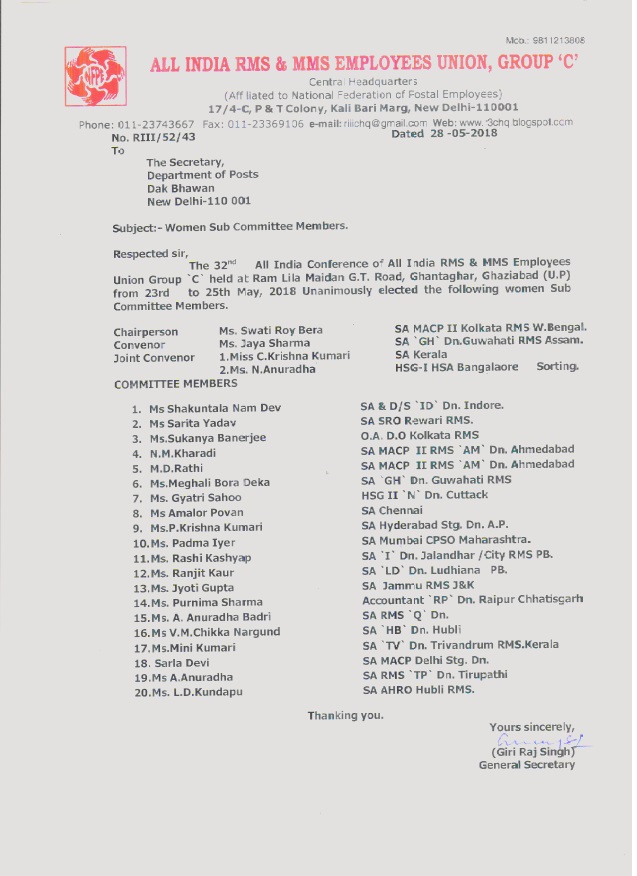 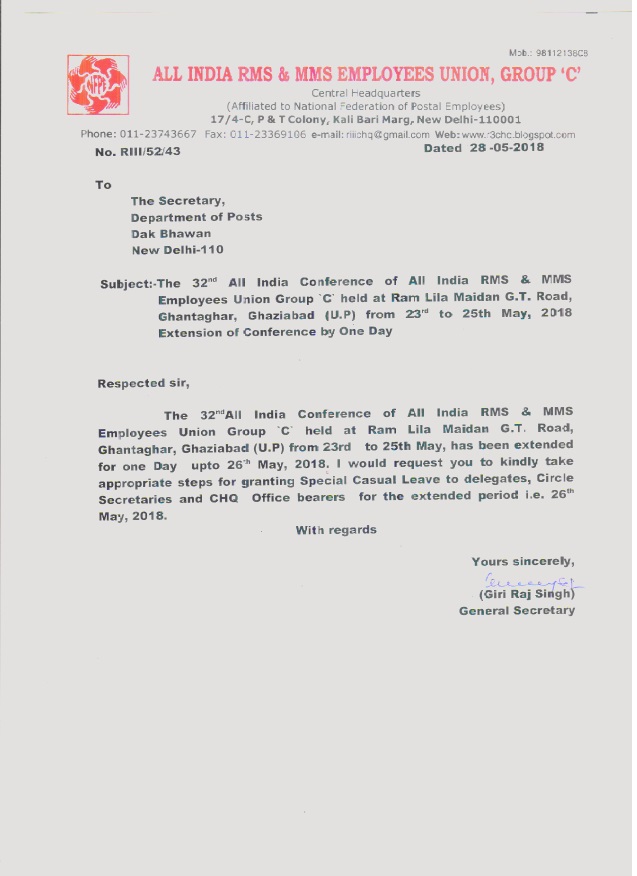 
Central Government Employees Group Insurance Scheme 1980 - Tables of Benefits for the savings fund for the period from 1.4.2018 to 30.06.2018 (Click the link below to view)
https://doe.gov.in/sites/default/files/CGEGIS-Table%20of%20benefits_0.pdf 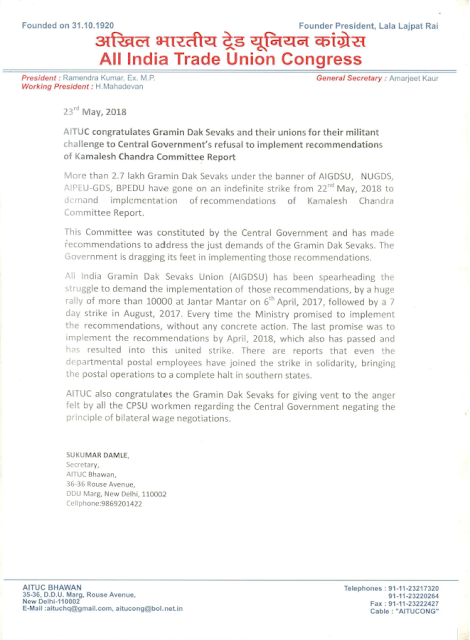 To
All General Secretaries/NFPE Office Bearers
All Circle/Divisional and Branch Secretaries of NFPE affiliated unions.

Dear Comrade,
As you are aware that the entire GDS employees of the Department of Post are on Indefinite Strike since 22.05.2018. All GDS unions i.e. AIPEUGDS, AIGDSU,NUGDS have joined together. BPEF-GDS Union is also on strike since 14.05.2018.

Four rounds of discussions have already taken place between Administration and GDS unions.

As no fruitful result has came out of the negotiations, therefore, all GDS unions have decided to continue their strike till the achievement of their demands i.e. implementation of Kamelesh Chandra Committee report and membership verification.
Further GDS unions have declared the following programme of action:

W as NFPE appeal to the entire leadership and membership of all NFPE affiliated unions to make all the programmes as mentioned above a grand success.

We appeal particularly to the Comrades of nearby Circles and Divisions to participate in large number on 01.06.2018 in Massive Dharna in front of Communications Minister’s Office, Sanchar Bhawan, Patel Chowk , New Delhi.

With revolutionary greetings
Yours Comradely

Posted by NFPE at 4:48 PM No comments: Links to this post

FORWARDING OF REPRESENTATION/PETITION-REGARDING ABOLITION OF POSTS LYING VACANT FOR MORE THAN FIVE YEARS. (REPLY FROM MINISTRY OF FINANCE) 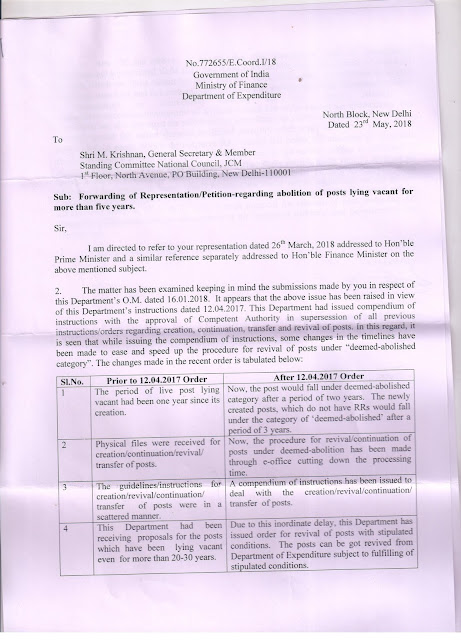 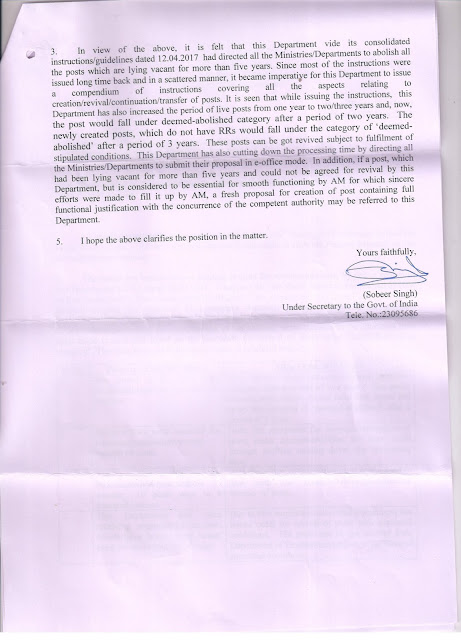 Posted by NFPE at 4:27 PM No comments: Links to this post

LTC FACILITIES TO THE CIVILIAN EMPLOYEES OF THE CENTRAL GOVERNMENT SERVING IN STATES OF THE NORTH-EASTERN REGION, LADAKH REGION OF STATE OF JAMMU & KASHMIR AND IN UNION TERRITORIES OF ANDAMAN & NICOBAR ISLAND AND LAKSHADWEEP GROUP OF ISLANDS-IMPLEMENTATION OF RECOMMENDATION OF 7th  CPC (Click the link below to view)    http://utilities.cept.gov.in/dop/pdfbind.ashx?id=2839


Posted by NFPE at 2:19 PM No comments: Links to this post

·        We appeal to the all members of NFPE Unions of nearby Circles and Divisions of Delhi to participate in large number in Mass Dharna in front of Sanchar Bhawan on 01.06.2018. 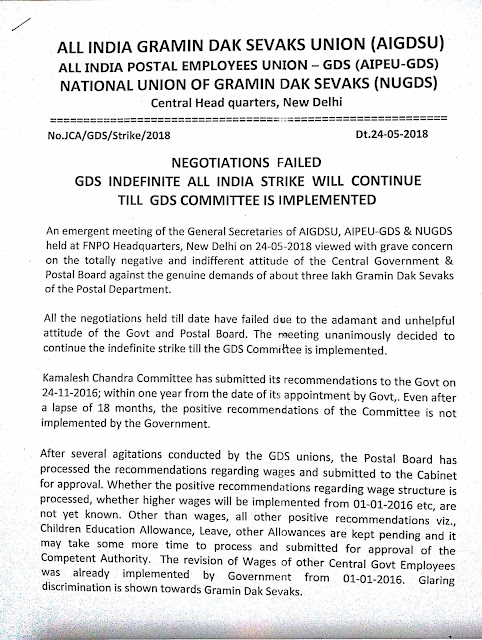 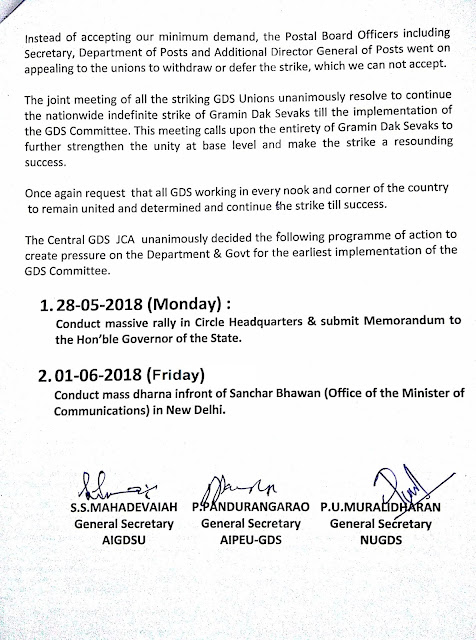 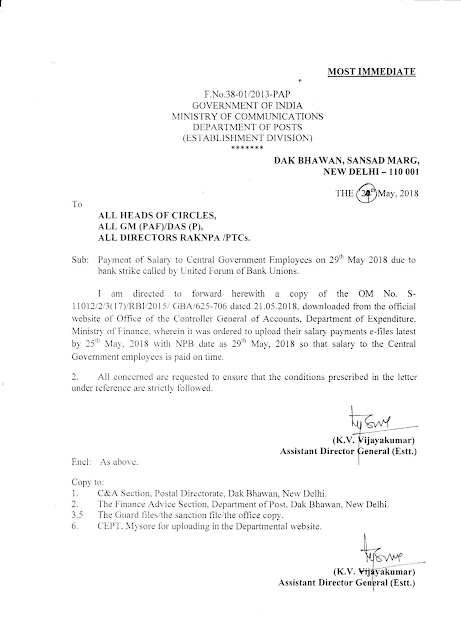 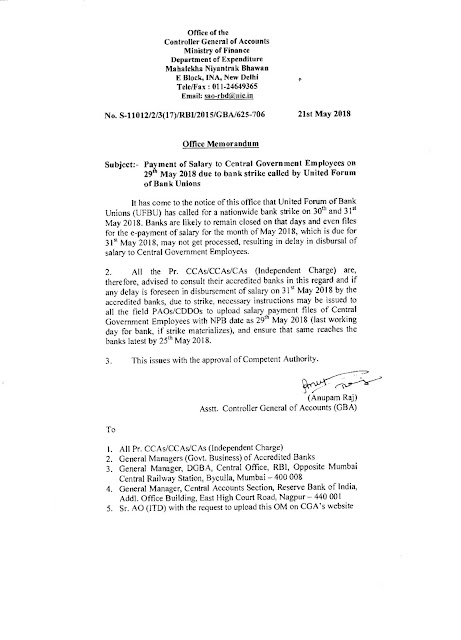 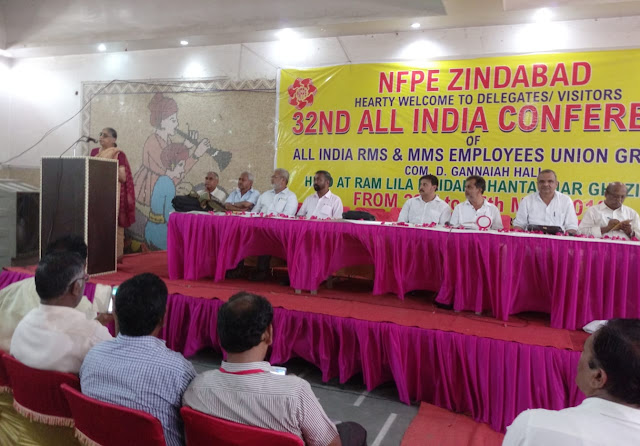 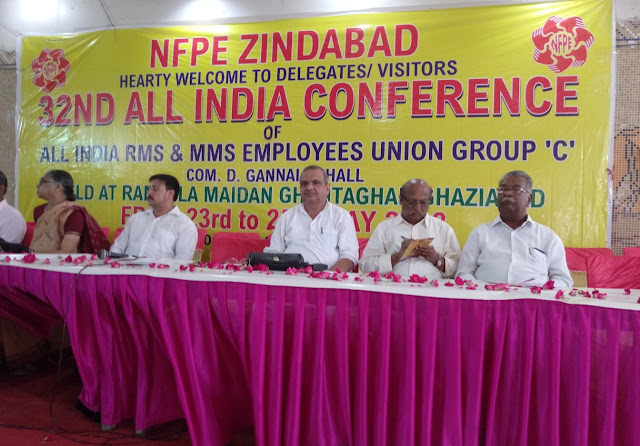 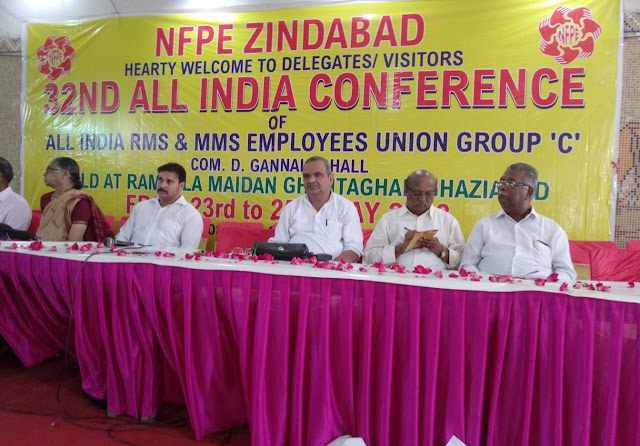 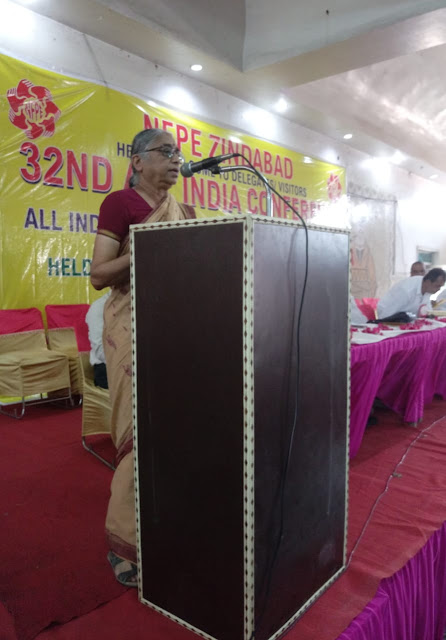 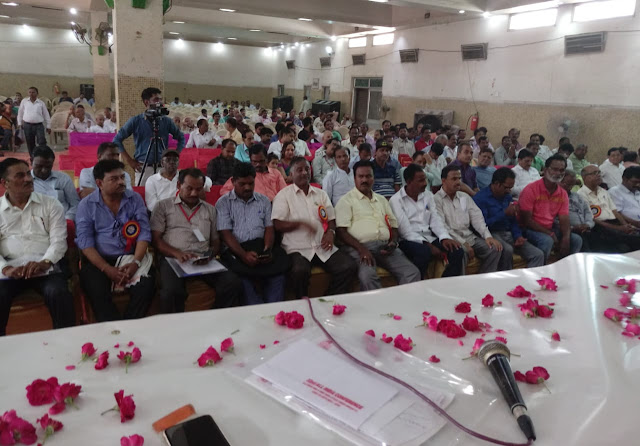 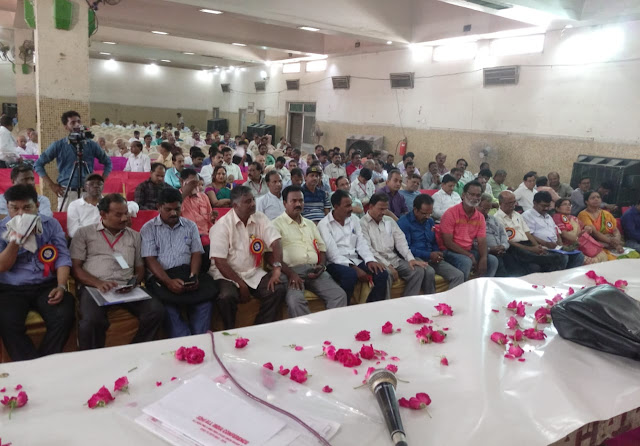 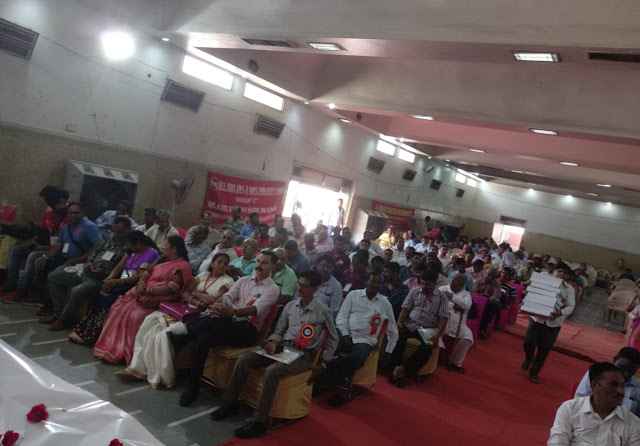 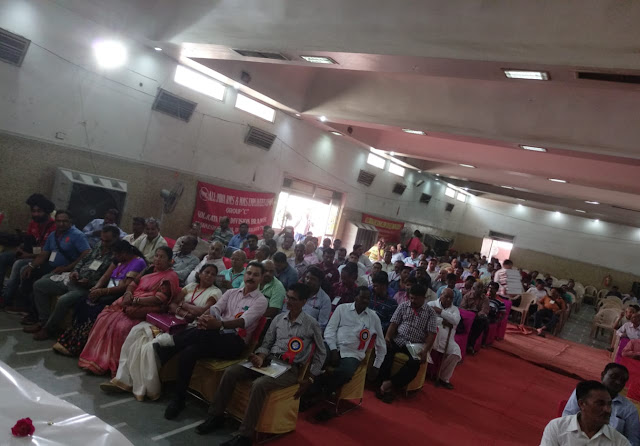 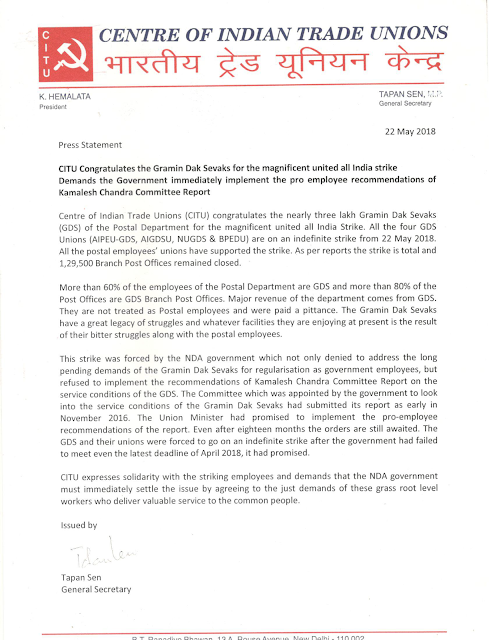 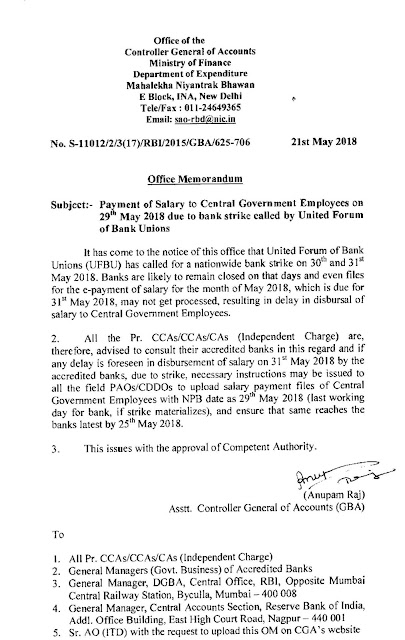