DATE OF INCREMENT UNDER RULE 10 OF CCS (RP) RULES,2016-CLARIFICATION-REGARDING 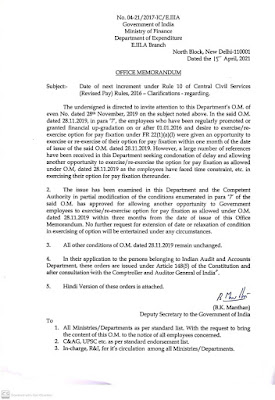 Com A.C.A. Kareem Senior leader aged 92 years, Former President, R-III Honourary President, Manglore RMS Branch passed away on 15.04.2021 night at 9 PM. He was the one of the tallest leader to build our union to this level in Karnataka Circle. Even after his retirement till his last breath he was closely associated with our union. 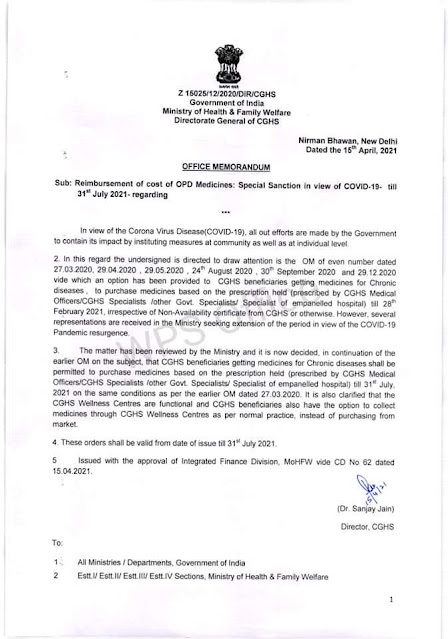 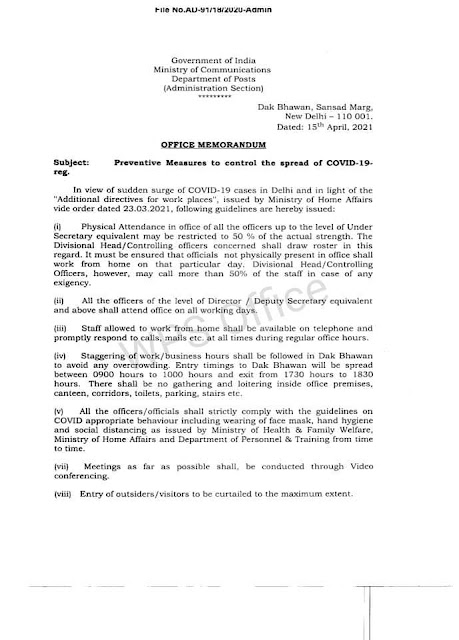 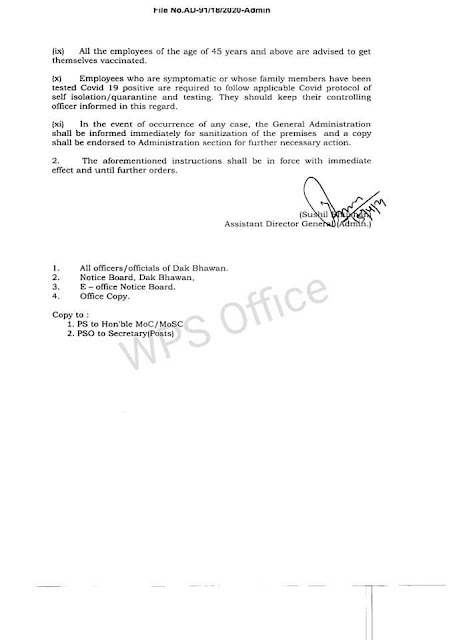 Subject: Extension of time lines for submission of Annual Performance Assessment Report (APAR) in respect of Group ‘A’, ‘B’ and ‘C’ officers of Central Civil Services for the year 2020-21.

2. In the light of situation arising out of COVID-19, it has been decided with the approval of the competent authority that the revised target dates for distribution/online generation, recording and completion of entire APAR process for the year 2020-21 for Group ‘A’, ·B’ and ‘C’ officers/staff of Central Civil Services shall be as specified in the Annexure.

3. This relaxation is a one-time measure only for the APAR year 2020-21, and is subject to the condition that no remarks shall be recorded in the APAR for the year 2020-21 after 31.12.2021. Where the reporting, reviewing and the accepting authority fail to record their comments within the time frame, the officer reported upon may be assessed on the basis of the overall record and self-assessment for the year, if he has submitted his self-appraisal within stipulated time.
4. It has further been decided that for the APAR year 2020-21 , the extended timelines specified in the Annexure shall also apply to the reporting, reviewing and accepting authorities , who have demitted office or retired from service on or after 28.02.2021. They shall be allowed to record their remarks till the respective extended cut-off dates.

Com Sudhir Kumar Hanuman,Ex Branch Secretary, R4 of Jharsuguda RMS is no more. He passed away yesterday evening at his Jharsuguda house at his age of 67-68 years.
He was Branch Secretary R4, Jharsuguda for many years.
He was a very stunch member of NFPE all along his service life and participated in all the strikes and struggles. He retired in the year 2015.
He was very simple and silent in nature but very sincere in duty. He never failed to attend any meeting like CWCs/DWCs or Conferences like Division/Circle and All India .
All India RMS & MMS Employees Union Group 'C'  CHQ convey  heartfelt condolences to the bereaved family members of Late Com Sudhir Hanuman . 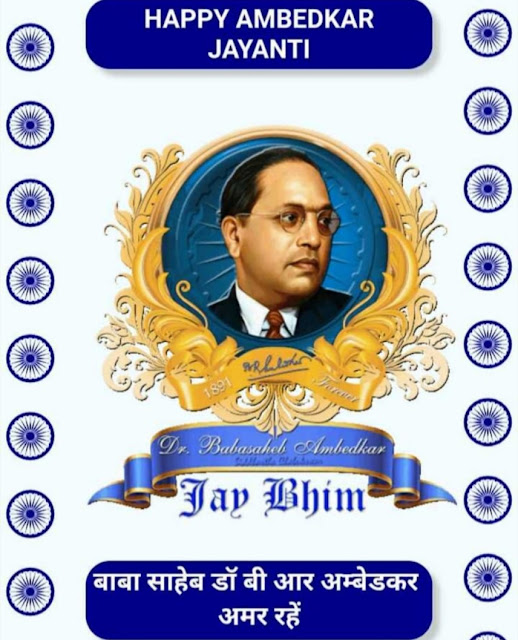 A great leader of the P&T Movement

Com.B.K.Banerjee was born on 14 April 1930 and he joined the Post and Telegram department as a clerk in RMS in 1950 – at Nagpur. It was but natural that being in Nagpur he came in contact of Comrade N.J Iyer who was then active in  the  central circle as a big leader. In those days the service conditions of the RMS and MMS employees were poor that there was no weekly off, no fix working hours, no overtime and pay was meagre. Com B.K Banerjee has decided to fight against all sorts of exploitation of Postal and RMS employees under the guidance of Com.N.J.Iyer.
Com B.K Bnerjee first of all formed a team of active local union workers of Posts, RMS and MMS and telephone department prominent amongst them were Com.V.W.Mohril,  N.H  Soni, A.R Jaiswal, Acharpohare, Bhakru Fattu, W.G – Umathe,  S.L Sharma, P.K Roy, V.P Tiwari, R.K.Singh, M.K. Despande, M.A Mahore and so many others to join him in the path of struggle. He formed a joint council of all trade unions of Nagpur city which was including P&T, Railway, State Govt. employees and he became a Convener.
After the Bifurcation of central circle Nagpur came under Maharashtra Circle.  So After 1970 he expanded his union activities in other parts of Maharashtra.
I came in contact with him in July 1972 in Bombay in the Divisional Conference of RMS ‘L’ division which was held in Chinch bunder P.O. Building. He was a guest speaker in the conference where as I was a delegate from Manmad RMS branch.
Thereafter he was elected as a circle president in Kolhapur circle Conference in February 1977  and subsequently elected as a  circle secretary of Maharashtra circle in February 1982 and became A.G.S in the Pune AIC held
Pune in Nov 1982. After being elected as a circle secretary of Maharashtra circle he undertook extensive tour programme  of the whole Maharashtra circle joining with him leaders of respective divisional secretaries and branch leaders. He used to deliver his speech in hindi in such a beautiful manner that many new entrants and workers had joined our union making in biggest in membership of all over India.
Com.B.K.Banerjee was having deep and update knowledge of Govt.orders, rules and regulations of the P&T department. He has an ability to quickly solve the problems of workers.
While Com.Banerjee being active in Nagpur in December 1973 there took place a agritation of central and state Govt. employees for the supply of 12kg wheat per adult. At that time five thousand railway workers sat on railway track in Ajni Railway station for fulfillment of their demand of 12kg wheat/rice. Com.B.K.Banerjee was arrested for being a chairman of the Central Govt. Coord. Committee but he was released subsequently after the police realized that the entire Nagpur City was on  the verge of being totally closed.
Similarly when in the 1974 Railway strike the police has evacuated the railway employees from their quarters, Com. B.K Banerjee met the Muncipal Commissioner to meet the demand of their food and shelter. Com. Banerjee challenged the RMS re-organisation scheme in April 1984 when there was a move to close the sorting sections and to convert them into transit, with other harmful measures of the P&T Board to abolish record offices, merger of SROs into HROs, concentration of mail in district mail offices thereby creating  huge surplus and resulting of RMS employees from their places of work. He has given power of attorney to me to fight case on his behalf in the Bombay High Court. The court has partly accepted our plea and orders for not to transfer the employees from one district to another.
Com Banerjee appeared before the arbitration to plea the case of increase the overtime rate of RMS employees. He won the case in favor of the employees as
the arbitration award agreed to recommend the case to increase OT rate 1.5 times more than the time rate which was made effective from 1/4/1991 from rupees  4.85 per hour to 15 per hour.
In April 1985 Com.B.K Banerjee was elected as a general secretary of All India RMS and MMS employees class lll at Jabalpur conference. In that conference a decision was made to go on one day token strike  on 6 June 1985 against the attacks of the Government upon RMS and MMS services. The strike was a big success.
He successfully organized a general strike on 16 June 1992 against the policy of privitisation of Govt. of India as well as  he organized a Postal strike in December 1993 to achieve the demands of ED employees.
Com.B.K. Banerjee has started publishing  hindi version of RMS workers so as to spread the rank and file of the hindi speaking states in addition to the English version.  He took extensive tour of branches all over India to collect the CHQ building fund in 1988 – 1989 and fully succeeded in his goal of collecting sufficient flat in Ghaziabad Development Authority which was completed in the year 1997.
Unfortunately he was met with a road accident in Delhi in December 1994 and subsequently died in a hospital on 20 – 12 – 1994. The stories of so many struggles his life time cannot be covered in two pages but his spirit of definitely inspire to the future generation active in the field of trade union movement.

All Circle, Divisional and Branch Secretaries are requested to hold meetings in memory of Com B.K.Bannerjee 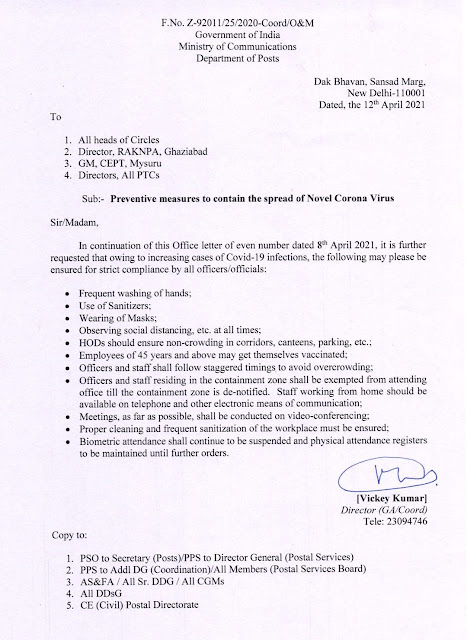