No. 22034/04/2013-Estt.(D)
Government of India
Ministry of Personnel Public Grievance & Pensions
Department of Personnel & Training
North Block, New Delhi
Dated: 01.03.2016
Office Memorandum
Subject:- References / Representations / Court Cases in various Ministries / Departments / Organisations for grant of MACPS benefits in the promotional hierarchy – reg.
In continuation of DOPT’s earlier O.M. of even no. dated 20.01.2016 on the above mentioned subject, the undersigned is directed to forward a copy of the decision of Hon’ble CAT, Ahmedabad bench in OA No. 120/000018/2015 filed by Shri Manubhai B. Rathore Vs. UOI &Ors whereby the demand of the applicant for MACP in promotional Hierarchy has been dismissed.
sd/-
(G.Jayanthi)
Director (E-I)
Phone No. 23092479
Authority: www.persmin.gov.in
Click to view the order 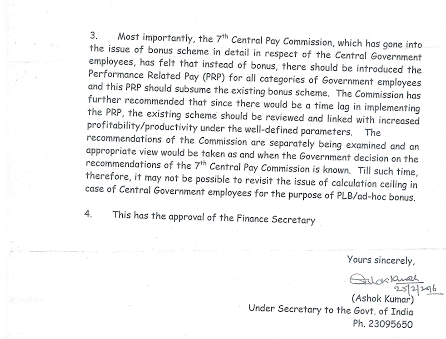 ----------Empowered Committee of Secretaries headed by Cabinet Secretary has held first round of discussion with JCM National Council  Standing Committee members on strike Charter of demands on 1st March 2016. Staff Side explained the justification of each and every demand  and conveyed the large scale resentment among the Central Government Employees to the Cabinet Secretary . Cabinet Secretary has not made any commitment on any demand. He informed that this is only a preliminary interaction with the Staff Side.