Importance of following the due process in disciplinary proceedings - regarding: DoPT OrderCLICK HERE FOR DETAILS

Submission of declaration of assets and liabilities by the public servants for each year – CCS Conduct Rules, 1964 CLICK HERE FOR DETAILS

Com. Vyasji was the friend, Philosopher, guide and everything for the Central Government employees movement. In the more than six decades long trade union life, Com. Vyasji endeared himself to every section of the Central Government employees. His death is an irreparable and irreplaceable  loss to us. He was a great leader, symbol of simplicity, a gem of a person and a leader who is down to earth. Extremely polite, kind hearted and compassionate. One of the finest human being, tallest leader, a gentle mentor and a legend.

The National Secretariat of the Confederation bows its head down before the memory of the legendary leader and dips our flag paying tearful tribute to this valiat fighter of the Trade Union movement. While paying homage to this stalwart, we extend our heartfelt condolences to his bereaved family members and also to the entire Central Government employees fraternity.

He is in our hearts! His memories will be forever with us! His long saga of struggle for the cause of the employees and workers will inspire the generations to come.

NATIONAL JCA STRUGGLE PROGRAMME – 30 LAKHS CENTRAL GOVERNMENT EMPLOYEES ARE GOING AHEAD WITH THE INTENSIVE CAMPAIGN AND PREPERATIONS FOR AN INDEFINITE STRIKE
As already decided by the 11th December 2014 Delhi National Convention of the JCM National Council staff side organisations, intensive campaign and preperations are going on in full swing all over India to make the proposed Parliament March of April 28th and the indefinite strike a historic success. The meeting of the National Joint Council of Action (NJCA) held at New Delhi on 16.02.2015 reviewed the preperations and took the following decisions.

(a)   State level joint conventions, wherever it is not yet held, should be completed without any further delay.
(b)   On 2nd March 2015 dharnas and demonstrations should be held in front of all District Collector offices and hand over memorandum to the collector. (Draft Memorandum will be exhibited in website.
District level Action Committees may also be formed to spearhead the agitational programmes.

3. In the Parliament March on 28th April 2015, each organisation should ensure maximum participation of their membership.

4. Press Conferences may be held at all levels and Posters, leaflets printed and circulated widely.

CONFEDERATION NATIONAL SECRETARIAT DECISIONS
The extended National Secretariat of the Confederation was held at New Delhi on 17.02.2015 and took the following decisions.

Please bring banners, flags, play cards etc. in large numbers.
2. The National Secretariat decided to conduct two days Women’s Workshop at Hyderabad in the month of September 2015. The COC Andhra/Telangana state has agreed to host the two-days camp. Delegate fee will be decided later. Maximum 150 lady delegates from all states will participate in the workshop. Number of lady delegates of Andhra/Telangana can be decided by the COC separately. Affiliated organsiations, COCs and Women’s committee members of confederation should start the preliminary work to ensure maximum participation of lady comrades in the two days workshop. Quota for each organizations/COC, delegate fee, dates and venue of the workshop etc will be intimated separately.

3. National Secretariat decided to call upon all affiliated organisations and COCs to observe 2015 March 8th as “INTERNATIONAL WOMEN’S DAY” in a most befitting manner either separately under the banner of Confederation or jointly with other women organizations. The theme of this year International Women’s Day is – “MAKE IT HAPPEN”.

ALL AFFILIATES AND COCs 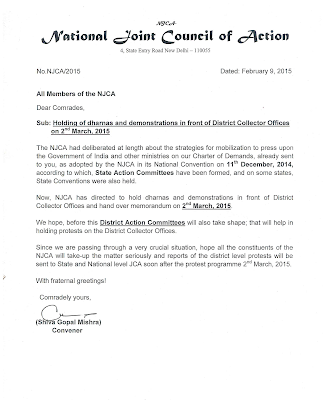 EMPLOYEE CAN'T BE KEPT UNDER SUSPENSION FOR OVER 3 MONTHS: SUPREME COURT.

NEW DELHI: Supreme Court has prescribed that a government employee cannot be kept under suspension for over 90 days in the absence of a charge sheet against him as such persons "suffer the ignominy of insinuations, the scorn of society and the derision of their Department".

Observing that "protracted period of suspension of delinquent government employee has become a norm", a bench of Justices Vikramajit Sen and C Nagappan said suspension, specially preceding formulation of charges, was essentially transitory or temporary in nature and must be of short duration.

"If it is for an indeterminate period or if its renewal is not based on sound reasoning contemporaneously available on the record, this would render it punitive in nature," it said.

Dwelling on the issue, the bench observed that "the suspended person suffering the ignominy of insinuations, the scorn of society and the derision  of his Department, has to endure this excruciation even before he is formally charged with some misdemeanor, indiscretion or offence.

"His torment is his knowledge that if and when charged, it will inexorably take an inordinate time for the inquisition or inquiry to come to its culmination, that is to determine his innocence or iniquity.

"Much too often this has now become an accompaniment to retirement. Indubitably the sophist will nimbly counter that our Constitution does not explicitly guarantee either the right to a speedy trial even to the incarcerated, or assume the presumption of innocence to the accused," the bench said.

The apex court's judgement came on a petition by defence estate officer Ajay Kumar Choudhary, who was suspended in 2011 for allegedly issuing wrong no-objection certificates for the use of approximately four acres of land in Kashmir.
Based on the findings given in the verdict, it said the officer can challenge his continued suspension.

"So far as the facts of the present case are concerned, the Appellant has now been served with a Charge sheet and therefore, these directions may not be relevant to him any longer.  "However, if the Appellant is so advised he may challenge his continued suspension in any manner known to law, and this action of the Respondents will be subject to judicial review," the bench said.
Tuesday, February 17, 2015