Dear Comrades,
All India RMS & MMS Employees Union Group `C` CHQ congratulates and Red Salute to , CWC members, Circle Secretaries, Divisional Secretaries and Branch Secretaries , office bearers and members for participating and making a grand success of all programmes called by Postal JCA, Confederation, National Council(JCM)  and Trade Unions.
POSTAL JCA MEETING:- Postal JCA (NFPE & FNPO ) Meeting was held on 4th February, 2015 at NFPE office, North Avenue, Post Office Building New Delhi-110 001 under the Presidentship of Com. D. Theagarajan Secretary General FNPO. All General Secretaries NFPE & FNPO  and GDS Unions participated. This meeting reviewed the formation  of Circle JCA. The Circles in which the PJCA not formed it should be formed before 15th February, 2015.
MEETING ON 40 POINT CHARTER OF DEMANDS WITH THE STAFFSIDE:- Meeting of Postal JCA Leaders was held with Secretary Posts and other higher officers of Postal Department on 5th February, 2015. Secretary Posts gave positive assurances in the most issues of the 40 Point Memorandum and she also assured that the Department  is not going to implement the recommendations of the Task force Committee Report and there will be  no corporatization and Privatization of Postal Department. Before implementation of any new scheme it will be discussed with the unions. She also agreed to refer again to Finance Ministry the case of GDS for inclusion in 7 CPC and she also assured to finalize the Cadre Restructuring proposals opf all cadres before 30th April, 2015.
As due to Political and economic policies of the Central government we cannot believe on the positive assurances given by Secretary Posts as the government implementing all globalization and privatization policies very intensively in all the Sectors and employees of all Sectors are agitated and moving on the path of agitation..
Therefore, we appeal to all CWC members , Circle / Divisional/Branch Secretaries  to mobilize rank & file to participate  and make  below noted Postal JCA programmes  in a phased manner on 40 Point Charter of Demands:-
1.      Formation of JCA at all levels before 15th February, 2015
2.      Dharna infront of Divisional offices on 20th February, 2015
3.      Dharna infront of Regional Offices on 27th February, 2015.
4.      Dharna infront of Circle Offices on 2nd March, 2015
5.      Dharna by All India leaders at Directorate New Delhi on 15th March, 2015 and indefinite Strike from 6th May, 2015.

MEMBERSHIP VERIFICATION:- All Circle / Divisional/Branch Secretaries  and office bearers are requested to make a special drive to collect the declaration from all members, non members, new members and members who may be willing to join our union in this membership verification  to be held during March & April, 2015.

EXTENDED NATIONAL SECRETARIAT MEETING  OF CONFEDERATIONB ON 17TH FEBRUARY, 2015:- Will be held on 17th February, 2015 to review the implementation of decisions of National Joint council of Action (NJCA) dated 11-12-2014 & 11-01-2015 and fixing the quota for participation in Parliament March on 28th April,  2015.
All CWC members, Circle/Divisional/Branch Secretaries  and office bearers  are requested to mobilize rank & file to participate and issue circulars and ensure the massive participation of RMS & MMS Employees in the above noted programmes including Parliament March on 28th April, 2015 and indefinite strike. Please start intensive campaign and preparations now onward.
Make it a grand success. Get ready for Indefinite Strike if demands not settled.,
With best wishes.
Yours comradely,
(Giri Raj Singh)
General Secretary

The Hon’ble CAT, Madras Bench in its order dated 19.03.2004 passed in O A No. 679 of 2003 (K Perumal and M Ramamswamy vrs. D G, Department of Posts and Other) observed, “.... action of the respondents is totally illegal and is incorrect. They cannot change the nomenclature, viz. ‘promotions’ made already to that of ‘financial up-gradations’ and deny the consequential benefits .......  In the matters relating to seniority, settled issues should not be disturbed/disorted after a long laps of time ..... the contention of the respondents  that the promotions given earlier  are to be construed  only as financial up-gradations  in our considered view cannot be accepted  as the same is unreasonable and such an argument goes against the letter and spirit of the communications issued by the respondents themselves......”

The Hon’ble CAT, Cuttack Bench in its order dated 23.07.2008 passed in O A No. 1196 of  2004 and O A No. 1213 to 1221 of 2004 filed by Brahmananda Lenka and others directed the respondents to consider the case of the Applicants within  a period of 90 days for grant of consequential benefits with promotion to next higher grade, namely HSG-II and HSG-I in the light of the decision of the Madras Bench of the tribunal which has been confirmed by the Hon’ble High Court of Madras.

The Order dated 23.07.2008 of Hon’ble CAT, Cuttack was subsequently upheld by the Hon’ble High Court of Odisha vide its Order dated 17.01.2012 which was examined by the Department  in consultation with the Department of Personnel & Training  and Department of Legal Affairs, Ministry of Law and Justice and finally it has been decided to implement the same in respect of the applicants of the above O A only.

Subsequently, the Postal Directorate, vide its letter No. 93-13/2012-SPB-II, dated 23rd January, 2015 directed the Chief Postmaster General, Odisha Circle to implement the above CAT’s order as specific to the applicants of the O A.

Accordingly, Circle Office, Bhubaneswar vide its Memo No. ST/26-15/2013, dated 04.02.2015 promoted 5 officials (the applicants) notionally to LSG, HSG-II and HSG-I and allotted 3 officials to Berhampur Region and 2 officials to Samablpur Region. Consequently the officials promoted notionally as such were posted by respective Regional heads as follows.

We are trying to collect the copies of the Directorate’s and other letters through RTI and obtaining legal advice for giving justice to thousands of  such employees all over India deprived from LSG/HSG-II/HSG-I promotions. All the Comrades are requested to extend their cooperation in this regard. 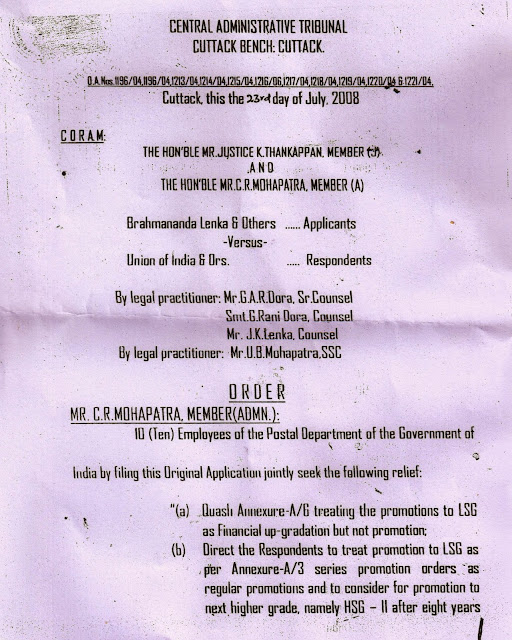 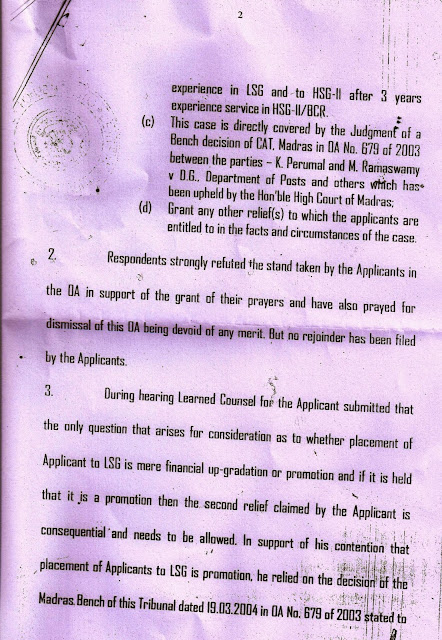 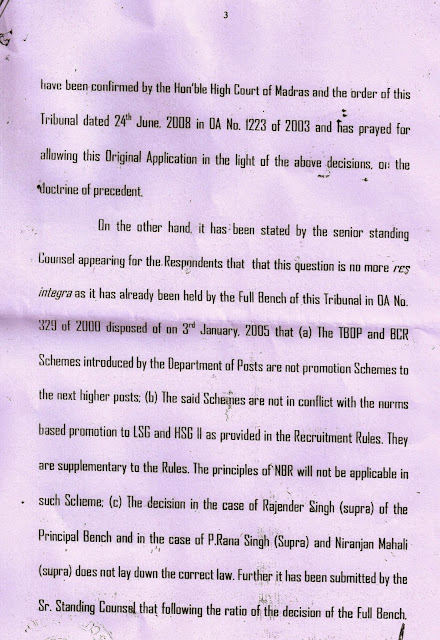 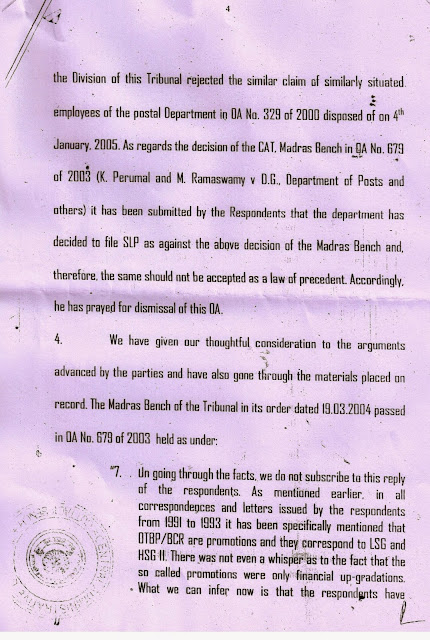 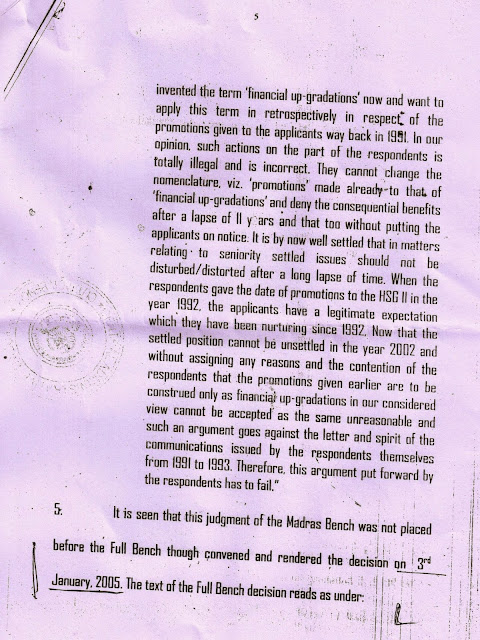 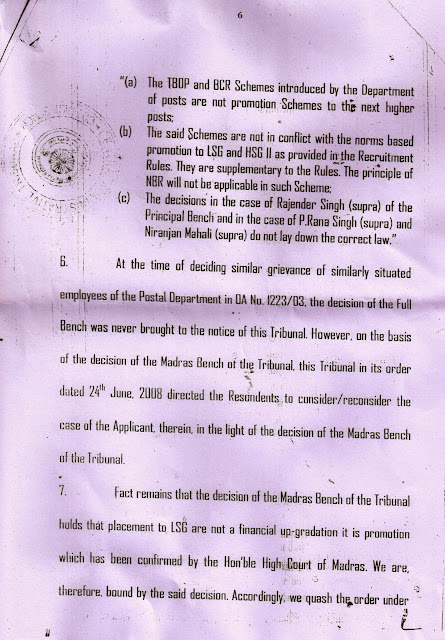 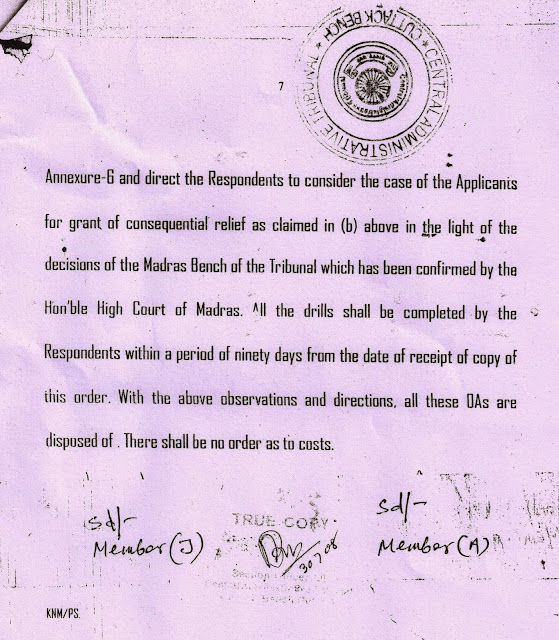