The Points stressed in the meeting held on 01.10.2012 with the Secretary and Postal Board Members on the  revised postal board policy 2012 by the Secretary General and General Secretaries of NFPE is recorded in a form of letter addressed to Postal Board. The letter is reproduced here under for the consumption of all viewers.

Kindly refer to the proceedings of the meeting held at Dak Bhawan under the Chairpersonship of Secretary, Department of Posts on 01.10.2012, on the above subject. The viewpoints expressed by the NFPE and its affiliated unions on the specific issues of unbundling of functions and introduction of an independent regulator for Indian Postal market is summarized below:

(a)   Theory of level playing field and its negative impact in the Indian situation
In the National Postal Policy 2012 it is stated that it is essential to allow free interplay of market forces and consequent stabilization of the Postal market. This means opening up of entry in the Postal market for national/international courier companies by granting licence for which amendment to the Indian Post office Act 1898 is a must.

In India more than 70% of the population lives in rural villages and the Department of Posts is the sole service provider in the rural areas, through it’s a vast network of more than 1,55000 post offices. It is an admitted fact that, even now couriers are not providing postal services in the rural areas. On getting licence they will restrict their area of operation to the metro cities/cities and shall capture a major share of Postal sector revenue. About 70% of the revenue of India Post is from metro cities/cities. The remaining rural villages where 70% of the population resides is contributing less than 30% of the revenue earned by India Post.

If competition is allowed, it will never be a fair competition in a level playing field. Aggressive competition will take place in the profit making city areas and vast majority of the loss making rural areas will be left to the India Post. This will result in further increasing the loss incurred by the Postal Department and will lead to the natural death of the India Post within a short span of time as the slogan is – “survival of the fittest.”

The experience in the telecom sector clearly manifested that the private telecom operators never cared to provide landline connections in the rural areas, inspite of inclusion of a separate clause to this effect in the licences granted to them, instead they opted to pay the meagre amount of fine imposed on them for violation of the compulsory clause of provision of rural landline connections. The Government and the regulator has always taken a lenient view towards private operators. In the Postal also the same thing will happen.

(b)   Amendment to the Indian Post office Act 1898
We do agree that many of the clauses of the Indian Post office Act 1898 has become obsolete and many changes are to be incorporated therein, especially in the context of induction of Information and Communication Technology (ICT) in the Postal Services. But the amendment envisaged in the National Postal Policy 2012 is quite unwarranted. By amending the Act, the Government want to end the monopoly of the Department of Posts in collection, processing, conveyance and delivery of letter mail articles. This is mainly to facilitate entry of the private courier companies to compete in the letter mail sector.

Earlier also Government has brought a bill called “Indian Post office Act Amendment bill” in the Parliament for this purpose. The bill was referred to the Standing committee of Ministry of Communications and IT. The Committee after hearing all the stake holders including the courier companies had given its report in which it was clearly recommended that the exclusive privilege of collection, processing, conveyance and delivery of letter mail articles should remain with the Postal itself. This being the position the present move to again bring an amendment is against interest of the people at large and the customers in particular. It is pertinent to mention that in many foreign countries, the exclusive privileges of letter mail is being preserved with the Government function and the existing right shall not be removed at any cost.

(c) Road map to privatisation
Government of India wants to open or liberalise the Indian Postal Sector for providing unhindered entry of the private sector. In the long run, the Government may withdraw from its responsibility to provide postal services to the public through Govt. owned Department of Posts. The ultimate aim and hidden agenda of the National Postal Policy 2012 is to give maximum patronage to the private sector and the “public-private partnership”, “unbundling of functions” etc are mainly intended for achieving this goal.

In the telecom, the government refused to grant permission to the Government owned BSNL for providing the value added cellular mobile services in India. Licences were granted to all other private cellular mobile companies and they charged exhorbitant rates for incoming and outgoing calls. Only after six years, that too after prolonged struggle by the BSNL employees and due to mounting public opinion, the Government reluctantly granted licence to BSNL also. If this can happen in Telecom, one can very well imagine what will be attitude of the Government and the fate of Department of Posts.

(d) We oppose the neo-liberal reforms
NFPE as an organisation of the Postal employees has been fighting against the neo-liberal globalization policies of the Government of India from 1991 onwards. When many countries where this reforms are implemented are reverting back, we are at a loss to understand why Government of India is going ahead with the reforms in the Indian Postal Sector. In fact, in the preamble of the draft National Postal Policy itself it is admitted that – “though the principle of separation of regulator and operator is widely discussed, it is yet to find universal acceptance”
In the above circumstances going ahead with the institutional reforms such as unbundling of functions i.e.; operation, regulation and policy making in the Postal Sector will be suicidal. We strongly oppose unbundling and setting up of separate regulator.

In view of the above NFPE demands the Government of India and the Postal Administration to desist from any move to unbundle the functions and also from the move to appoint separate regular for Indian Postal market.

MEMORANDUM SUBMITTED BY THE POSTAL JOINT COUNCIL OF ACTION (NFPE & FNPO) TO SECRETARY DEPARTMENT OF POSTS, NEW DELHI ON 01.10.2012 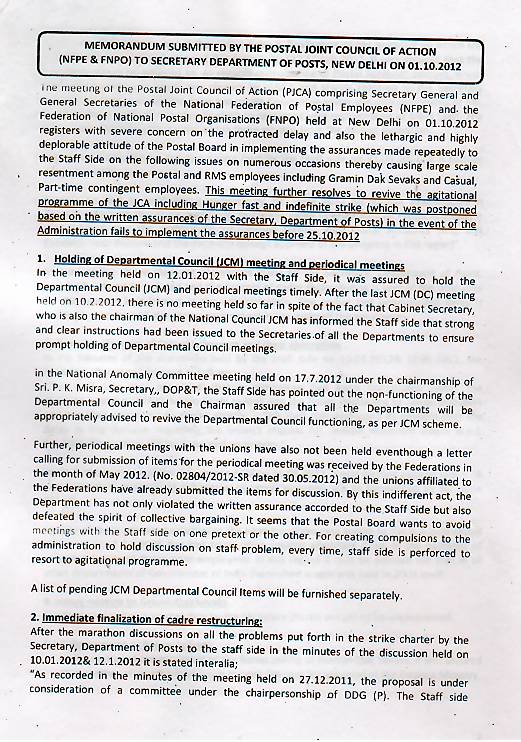 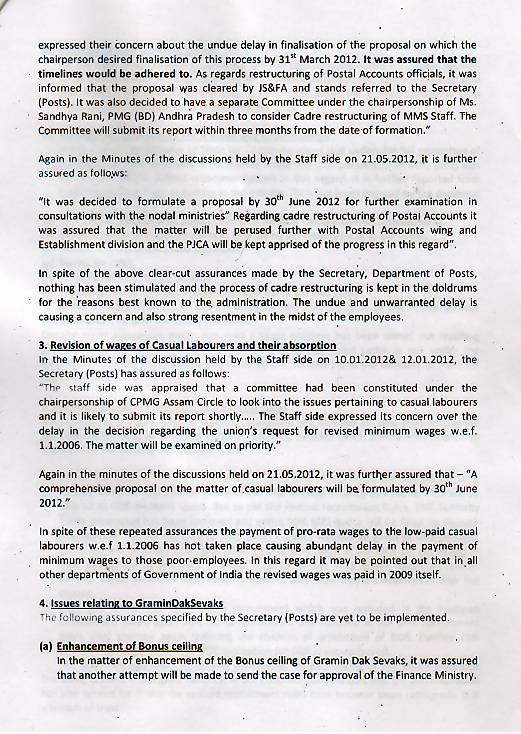 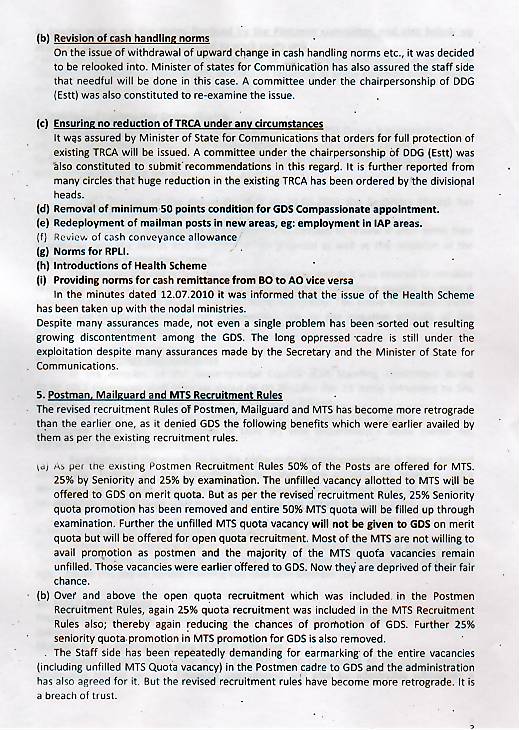 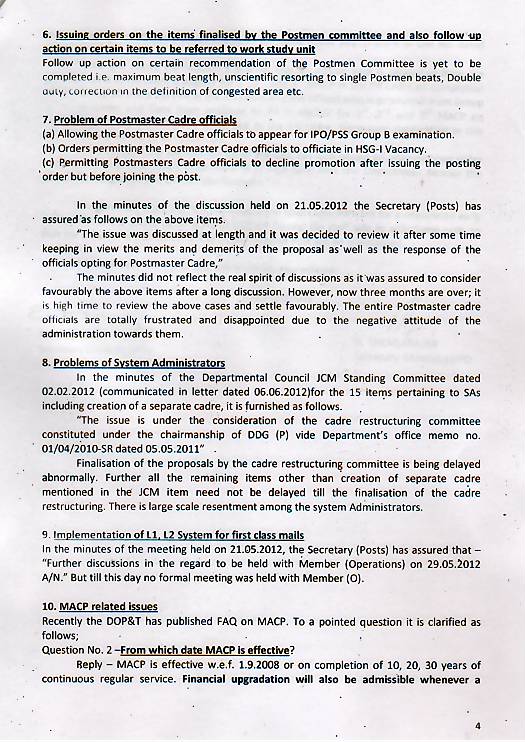 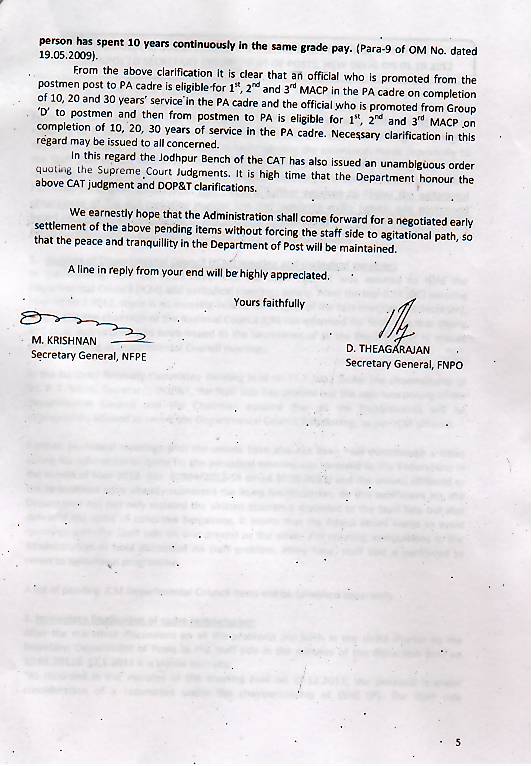