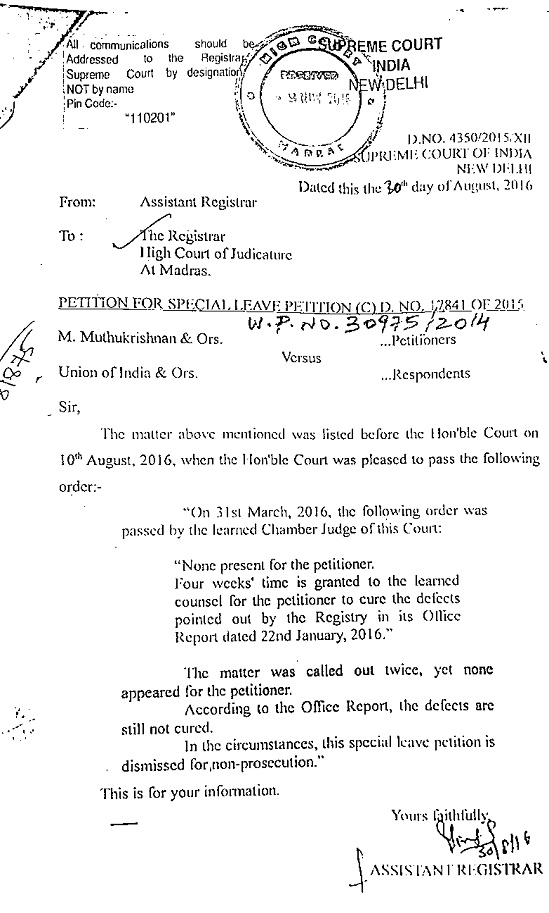 DECEMBER 15th PARLIAMENT MARCH
NO CHANGE
PROGRAMME WILL BE CONDUCTED

IT IS REPORTED THAT SOMEBODY IS SPREADING FALSE NEWS IN SOCIAL MEDIA THAT THE DECEMBER 15TH PARLIAMENT MARCH IS POSTPONED.

THIS IS TOTALLY FALSE NEWS.

THERE IS NO CHANGE IN THE DATE OF THE PARLIAMENT MARCH.

IT WILL BE HELD ON DECEMBER 15TH ITSELF

DO NOT BELIEVE SUCH FALSE NEWS

It is proposed to submit a Memorandum to Hon’ble Finance Minister conveying our views and demands for inclusion in General Budget 2016-17. Draft Copy of the Memorandum is given below.

Please suggest additions/Modifications, if any, required, within two days.

It is now more than four months that the Government has held out the assurance to the leaders of NJCA that they would revisit the minimum wage determination and the consequent fitment factor of the 7th CPC.  The understanding reached on 30th June, 2016 was that the Government would set up a high level committee to examine the complaint made by the employees organizations to the effect that the 7th CPC had not adhered to the norms of the Dr. Aykhroyd formula.  The said decision was in the backdrop of the NJCA’s strike notice which was served on 9th June, 2016 and its resolve to go ahead with the said decision to organize the indefinite strike action from 11th July, 2016.

The employees had realized that contrary to the impression, the 7th CPC  imparted to the leaders during their interaction with it, its final suggestions were extremely nugatory and were the product  of pressure exerted by the Government on the Commission .at the fag end of its functioning.  They found that the minimum wage determined by the commission was in violation with the agreed principles of wage determination in the case of civil servants, it had recommended the least quantum increase in the wages in comparison with all the earlier Commissions; it had reduced the rates of various allowances without any valid  rhyme or reason; it had abolished certain allowances despite the continuance of the extra functions/circumstances for which those allowances were originally granted; had abolished all interest free advances;  had withdrawn the existing benefits, perks and privileges which had originally granted to a section of the employees and officers taking into account the peculiarities of the assigned jobs to them etc.  Naturally the disappointment that arose from such negative attitude of the Commission paved way for anger and consequent agitation,  creating thus an atmosphere of confrontation.

The setting-up of a committee under the Chairmanship of the Cabinet Secretary was, therefore, seen as a step in the right direction.  After about six months deliberations, the Committee seems to have given a report to the Government content of which was not made public.  However, during its inter action with the Staff Side, the Committee had given the impression and indication  that it would make changes to the quantum of minimum wage and fitment factor and the Fixed Medical Allowance of the Pensioners would be suitably amended.  The Committee intimated the staff Side that the Government would set up separate Committees for allowances and advances to effect a relook into the matter in consultation with various nodal departments of the Government of India.  In other words, the Government through the Committee headed by the Cabinet Secretary conveyed that it would create a conducive climate for a fruitful negotiation and settlement.

The 29th June proclamation in the form of Notifications was a bolt from the blue .   Was it designed to discredit the NJCA leadership or snub the Committee headed by the Cabinet Secretary or reflection of the arrogance of the party in power was not discernible.  It was in that background the NJCA met on 30th June and decided unanimously to go ahead with the preparation for the indefinite strike action.  Undoubtedly the  Government’s attitude had added fuel to the fire of anger and the leaders especially at the gross root level ,who had hoped that the Government would avert the situation of confrontation welcomed the decision of the NJCA wholeheartedly.

The late night discussions, the group of Ministers  had with the NJCA leadership on 30th June, 2016  and the offer of a negotiated settlement of the core issues through the setting up of a high level committee was considered a step in the right direction by the NJCA leadership while accepting the offer of talks, though the State level leadership in quite a number of states felt that the Government was indulging in chicanery.
The time frame of six months for the Committee to complete its deliberations and make suggestions to the government on the core issues was over technically on 6th November, 2016 .  The  National Secretariat  of the Confederation met and rightly decided to chalk out a series of programmes of action, the second phase of which would be carried out on 15th June, 2016 in the form of a massive march to the Parliament house. These programmes are to culminate in a strike action.   Isolated action, the Confederation is fully aware is not capable of bringing about compulsion on the Government to revise their decisions promulgated on 29th June, 2016.   Confederation is confident that the Defence and Railway organizations who are the predominant partners in the NJCA  would realize the gravity of the situation  and enliven the NJCA  and spearhead the movement to its logical end.  Isolated ventures will not be avoidable  in certain exigencies, when demarcation in action becomes necessary so as to maintain the character and ideology of the organization and confidence of its members becomes paramount.


Applicability of the revised pay scales based on the recommendations of the 7th Central pay Commission in respect of employees of quasi-Government Organizations, Autonomous Organizations, Statutory Bodies set-up by and funded/controlled by the Central Government

1st Meeting of the Anomaly Committee to he held on 01.12.2016 un the Chairmanship of Secretary (P) on the calculation of the Disability Pension for Defence Forces’ Personnel as per the recommendation of the 7th CPC.