Don’t be surprised if your neighbourhood postman delivers products you have ordered online, along with letters.
The department of posts has recently tied up with various online shopping portals to offer delivery services.
With e-commerce growing by leaps and bounds, the postal department, which has a widespread reach, particularly in rural areas, will bridge the gap in logistics.
The department has tied up with major e-commerce players, including Amazon, Flipkart, Shopping Zone India and Naaptol, to help ramp up their delivery system.
“We are also in the process of tying up with smaller online players. We are delivering more than 80 per cent of the products ordered online to customers across the State on behalf of some e-commerce firms,” said an official.
A tie-up with another major online market firm, Snapdeal, is also under way. Soon, customers need not necessarily visit the nearest philatelic bureau to buy stamps as Snapdeal will also offer philatelic stamps and first covers of the postal department.
In Chennai and its suburbs, nearly 2,300 postmen, postwomen and gram dak sevaks (who are part-time staff members) attached to 110 post offices will be involved in delivering goods through various modes, including cash-on-delivery.
T. Murthy, chief postmaster general, Tamil Nadu circle, said: “We have set up a dedicated parcel-handling unit in Ekkaduthangal where the products are sorted and dispatched to various places. We have the capacity to handle over 40,000 parcels daily.”
The department now handles nearly 28,000 parcels daily and delivers across the State. Of these, about 30 per cent is delivered in and around Chennai.
“We deliver in a day from the date of booking, in Chennai, and in a maximum of four days in remote areas. We are processing the requests of many other e-commerce firms too,” said Mr. Murthy.

New Delhi: Lakhs of central government employees Thursday took a pledge to ensure cleanliness in their offices and residential areas by working at least two hours per week as part of Narendra Modi administration's "Swachh Bharat" Mission.
Each central government department had made detailed arrangements to administer the pledge to its employees on the occasion of Mahatma Gandhi's birth anniversary today.
It is for the first time that all employees from the level of peons to Secretary were called to the office on 'Gandhi Jayanti', which is otherwise a government-declared holiday, to be part of the 'Clean India' campaign.
Banners displaying message of maintaining cleanliness at work place and surroundings were put up on the central government office buildings and along the road sides to encourage people.
Some of the employees were also given specially-designed T-shirts displaying messages for maintaining cleanliness.
Home Secretary Anil Goswami administered the pledge to the employees of Ministry of Home Affairs and Ministry of Personnel. Hundreds of employees participated in the programme and took the pledge.
"It is like a celebration. Employees are celebrating this. Cleanliness is a continuous process. I am sure employees will continue to ensure cleanliness in office and in living areas," said Mamta Kundra, Joint Secretary in Ministry of Personnel.
There are about 30.98 lakh central government employees in the country.
Employees took a pledge to remain committed towards cleanliness. "I will devote 100 hours per year, that is two hours per week to voluntary work for cleanliness. I will neither litter nor let others litter. I will initiate the quest for cleanliness with myself, my family, my locality, my village and my work place," reads the pledge, administered to the employees by senior officials.
The Prime Minister has given a call for "Swachh Bharat" (Clean India) as a mass movement to realise Mahatma Gandhi's dream of a clean India by 2019, when the country will celebrate 150th birth anniversary of the Father of the Nation.
"I will encourage 100 other persons to take this pledge which I am taking today. I will endeavour to make them devote their 100 hours for cleanliness," as per the text of the pledge.
Cabinet Secretary Ajit Seth had written to secretaries of all central government departments to create awareness on the matter and ensure that the pledge is administered to employees working under them.
"For a campaign of this nature to be successful, there is a need to create massive public awareness and to ensure participation and action for cleaning homes, government offices, schools, hospitals, work places, streets, roads and markets, railway stations and bus terminals, statues, monuments, rivers, lakes,ponds, parks and other public places.
"It is important to involve government and public sector officials at every level, non-government organisations, education and health institutions, rural and urban local bodies, Self-Help Groups, youth organisations, residents and market associations as well as business and industrial chambers and associations in the cleanliness and awareness drives," Seth had said in his letter.

The Terms of Reference (TOR) for the Task Force are as under:
1.To provide efficient postal network and points of presence (particularly in rural areas and small towns) to Central Government Ministries / Departments, State Goverments (including Local Self Government) and private sector players for delivering various citizen-centric services, schemes, products to the people.
2.To further the role of Post Office in Financial Inclusion, including Insurance products;
3.The infrastructure requirements of the post offices and the Postal Network; and
4.To make the Post Office financially viable
The Task Force will devise its own mechanism / modalities to examine the issues mentioned in the ToRs and submit its Report within three months from the date of constitution.


TRANSFERRING OF KNOWLEDGE TO THE SUCCESSOR IN CENTRAL DEPARTMENTS


CLICK HERE to view the DoPT OM regarding Re-institutionalizing the practice of leaving 'note for the successor'.


Delegation of powers of revision to the Heads of Circles.

REGARDING EXTENSION VALIDITY OF EMPANELMENT OF ALL HEALTH CARE ORGANIZATIONS EMPANELLED UNDER CGHS CITIES OUTSIDE DELHI/NCR TILL 31ST OCT, 2014CLICK HERE FOR DETAILS 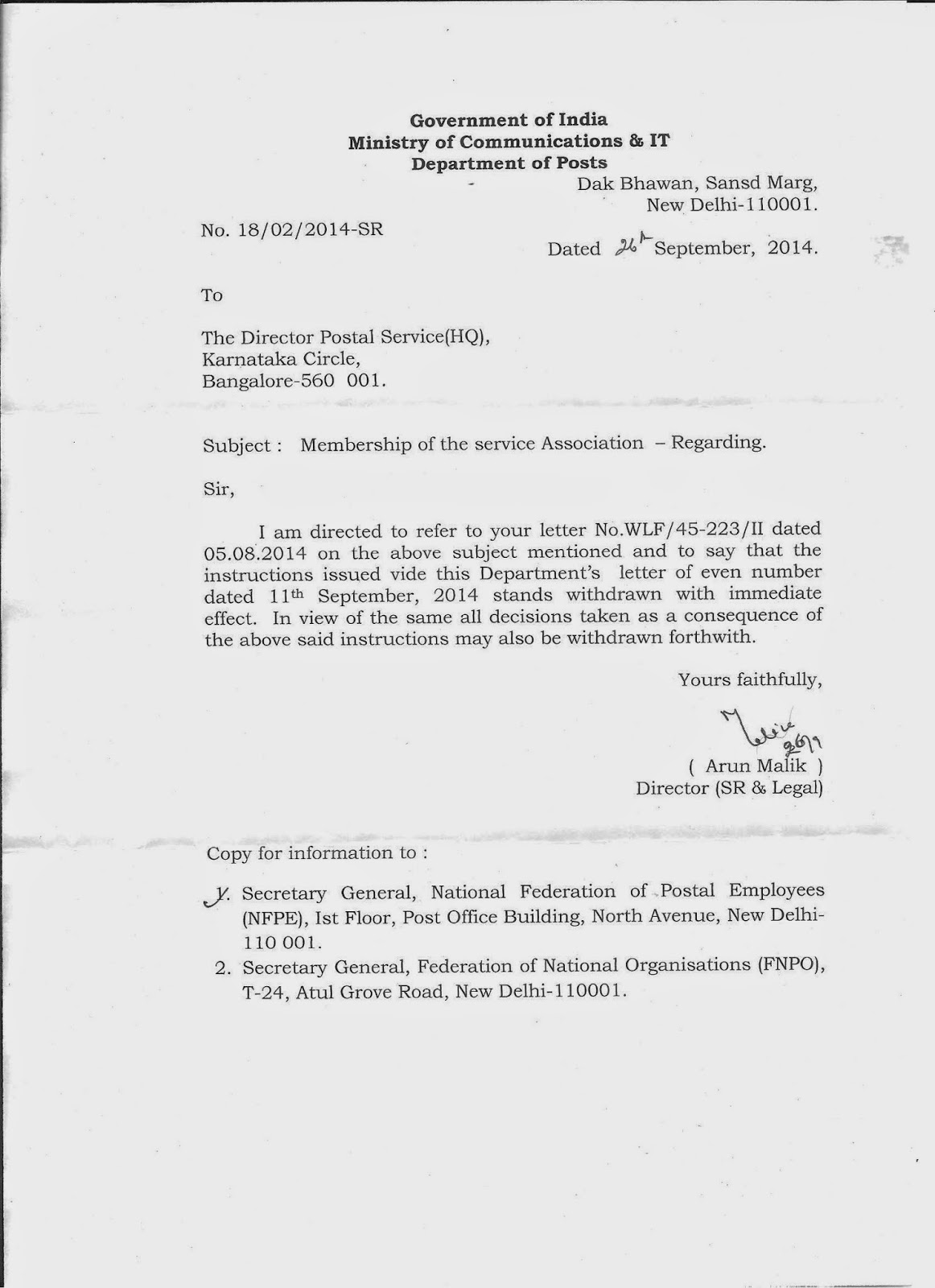