It seems that the Post Bank of India (PBI) may become a reality in the near future. For the last more than fifteen years we have been told about the Post Bank and even the Parliamentary standing committee on Communications & IT has repeatedly demanded the Government for commencing Post bank. Several attempts have been made, but the Finance Ministry always took a negative stand, for one reason or the other. Majority of the bank managements including nationalized banks have been opposing the entry of the Postal department into commercial banking. The reason is obvious. They foresee a potential threat to their existence once Post Bank enters into their field and during the course of time the Post Bank may become one of the biggest Bank.

Post Bank of India will be an independent entity, separate from the current operations of small savings schemes being carried out by the Department of Posts on behalf of Ministry of Finance. Department has accordingly submitted an application to the Reserve Bank of India (RBI) on 28.06.2013 seeking banking license subject to necessary cabinet approval. RBI has said that new banks will have to set up at least three branches in villages with a population of less than 10000, for each branch they establish in other areas. Although Post Bank does not intend to open a bank in every Post office, the plan is to meet the financial inclusion goal through these Post offices. India Post had 1,54,822 Post offices across the country as on 31.03.2013, the largest for any department in the world, and close to 90% of them – 1,39,086 – are in rural India. This is more than four times the number of rural branches run by India’s Banks put together. According to plan prepared by Ernst & Young, India Post will become Post Bank of India’s banking correspondent. PBI will use Post office infrastructure but very frugally. Carefully done PBI can be a game – changer in rural areas.

India post is among 26 applicants that sought banking licenses from RBI. India Post has to develop the standards to meet RBI guidelines. In its guidelines for new banking licenses announced on 22nd February 2013, RBI required applicants to prove their eligibility on several fronts – from promoter holding to past experience to business plans. The minimum capital required by the applicants for license is Rs. 500 crores and foreign share holding in the new banks is capped at 49% for the first five years. The new banks have to be set up under a non-operative Financial Holding company (NOFHC). They also have to maintain minimum capital adequacy ratio – the ratio of risk weighed assets, a measure of financial strength of the bank – of 19 % for the first three years. New banks also need to list their shares within three years of starting operations.

The main argument put forward by those opposing the Post Bank is that Postal department has no experience when it comes to giving credit (loans). Department has only been taking deposits till now. Sanctioning and disbursing of credit needs an entirely different aptitude. India Post has no specialized experience in the business. It is reported that unlike many believe, the Post Bank of India will be a completely new entity with no legacies of a government department and very little to do with its parent department, except using some of its network. It will have an independent Board. Separate recruitment has been planned to have specialised banking staff. Of course, the Post Bank will be a subsidiary organisation of India Post, which need to be registered as a public sector Bank and Government equity in this new entity could be diluted. Whatever reforms and regulations Government implements in Nationalised Banking sector will be fully applicable to Post Bank of India also.

There are many talented and qualified Postal employees who want to switch over to the Post bank and to work as employees under the Post Bank. The reports that separate recruitment will be made for the Post Bank has cast shadow upon their hope to work in the Post Bank. NFPE demands that the existing Postal employees who want to switch over to the Post Bank shall be given chance to exercise option and if need be a trade test to assess their capability can also be conducted before selection. Selected officials can be imparted with intensive training in commercial banking business. In any case 100% open market direct recruitment is an injustice to those talented Postal employees who may not be able to apply for open recruitment due to age factor etc. we urge upon the Postal Board and Finance Ministry to give due consideration to this aspect, before the new Bank is rolled out.

Transfers and posting of Sr. Managers and Managers of Mail Motor Service (MMS), Group 'A' of Department of Posts (Click the link below for details)           http://www.indiapost.gov.in/DOP/Pdf/Postings/6_3_2013_SPGdtd23aug2013.PDF

CONFEDERATION DEMANDS INCLUDED IN THE AGENDA OF THE JCM NATIONAL COUNCIL

The letter give by Com. Umraomal Purohit, Secretary, JCM (NC) and the 12 demands included in the agenda are given below: 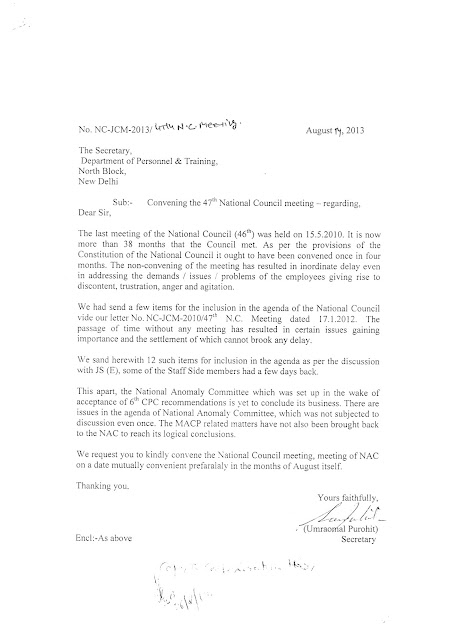 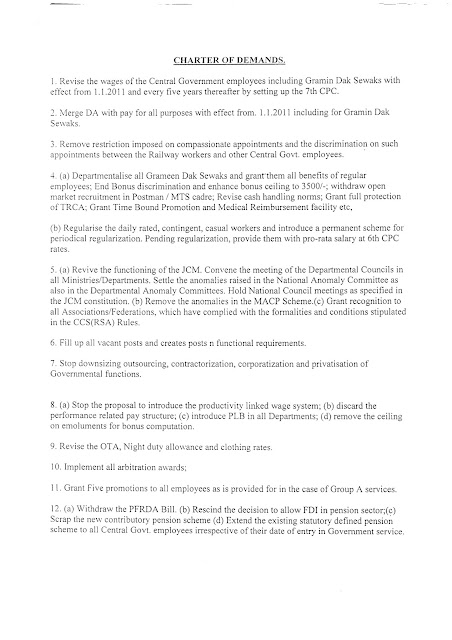