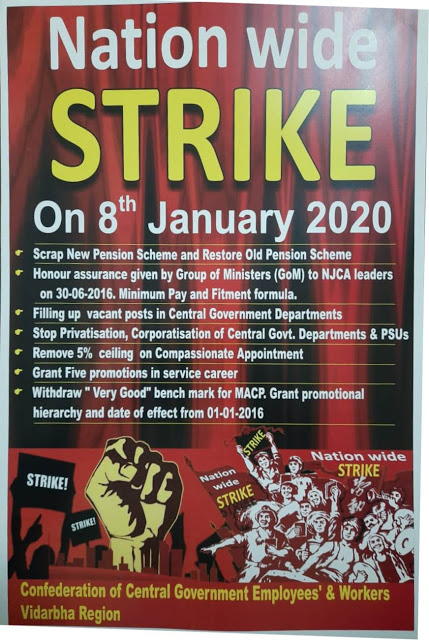 5G Spectrum will be given for trial to all operators; We need to make UPI payment interface a global beacon; Launches Central Equipment Identity Register for tracing Stolen/Lost Mobiles in Delhi

The Union Minister for Communications, Law & Justice and Electronics & Information Technology, Shri Ravi Shankar Prasad has said that the Mobile Security should be our National Priority because the mobile handset became an important tool for all online activities. He was addressing the gathering, here today, after launching a Web Portal called ‘Central Equipment Identity Register (CEIR)’ for the customers of Delhi to facilitate blocking and tracing of Stolen/Lost Mobile Phones in Delhi. The Lt. Governor of NCT of Delhi, Shri Anil Baijal, the Secretary, Telecom and the Chairman, Digital Communications Commission, Shri Anshu Prakash, the Commissioner of Delhi Police, Shri Amulya Patnaik, the Member (Technology), Digital Communications Commission, Shri S.K. Gupta were also present on the occasion.

Shri Ravi Shankar Prasad said that Government has decided to give 5G Spectrum for trial to all operators in the country. This may take few years to launch it fully all over the country, he added. UPI Payments interface has become primary means for all online money transactions in the country and we need to make it a Global beacon for making Indian rupee much stronger.

The Minister for Communications said that this is the age of communication and communication is power, and this is the age of technology and the technology is power. He further said that while we exploit use and make optimum involvement of technology for development the equally smart criminals induce technology for their own end. Therefore, we need a technology that safeguards our interests, he added.
Shri Ravi Shankar Prasad said that Aadhar is a digital identity to confirm our physical identity and the digital India is for digital inclusion. Digital India is empowering ordinary Indian to the power of technology which is leading to digital inclusion, he said. Industry should be more innovative and Indian players should imbibe new innovations in IT, he added.

The Lt. Governor of NCT of Delhi, Shri Anil Baijal while addressing said that in the NCR Delhi itself the mobile theft cases are increasing to the tune of 40,000 cases per year and there should be a mechanism to address this problem. He requested the Minister for Communication to consider the integration of Zonal Integrated Police Network (ZIPNET) with the CEIR for better functioning.

The Secretary, Telecom and the Chairman, Digital Communications Commission, Shri Anshu Prakash said that the Tele-density in the country has increased to 242 mobiles for 100 populations and the mobile handset became a means to fulfil all day-to-day requirements. Therefore, securing mobile with a system is the need of the hour.

International Mobile Equipment Identity (IMEI) is supposed to be a unique identity of a mobile phone device. A phone with one/two slots of SIM Card is programmed with one/two IMEI number as the case may be. IMEI number being programmable, some miscreants do reprogram the IMEI number, which results in cloning of IMEI causing multiple devices with same IMEI number. As on date, there are many cases of clones/duplicated IMEI handsets in the network.

If such IMEI is blocked, a large number of mobile phones will get blocked being handsets with same IMEI causing inconvenience to many genuine customers. Thus, there is a need to eliminate duplicate/fake IMEI mobile phones from the network.
Accordingly, this project called Central Equipment Identity Register (CEIR) system has been undertaken by the DoT for addressing security, theft and other concerns including reprogramming of mobile handsets.

CSCs are the access points for delivery of essential public utility services, social welfare schemes, healthcare, financial, education and agriculture services, apart from host of B2C services to citizens in rural and remote areas of the country. It is a pan-India network catering to regional, geographic, linguistic and cultural diversity of the country, thus enabling the Government’s mandate of a socially, financially and digitally inclusive society. 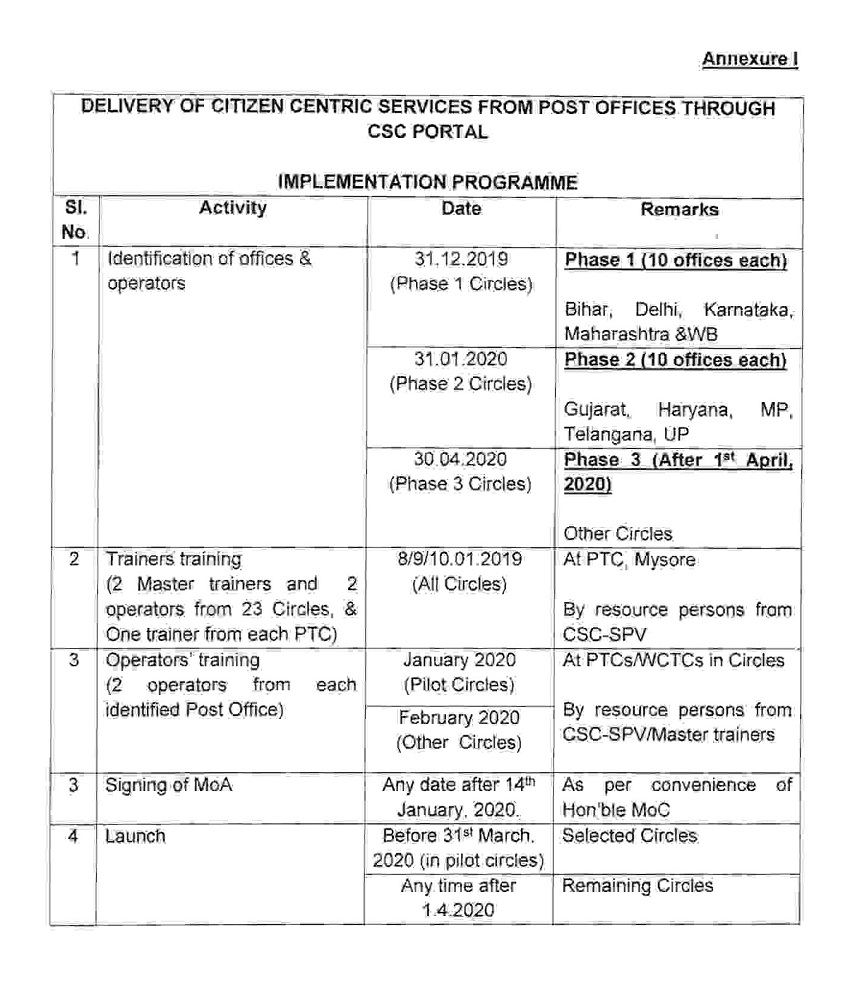 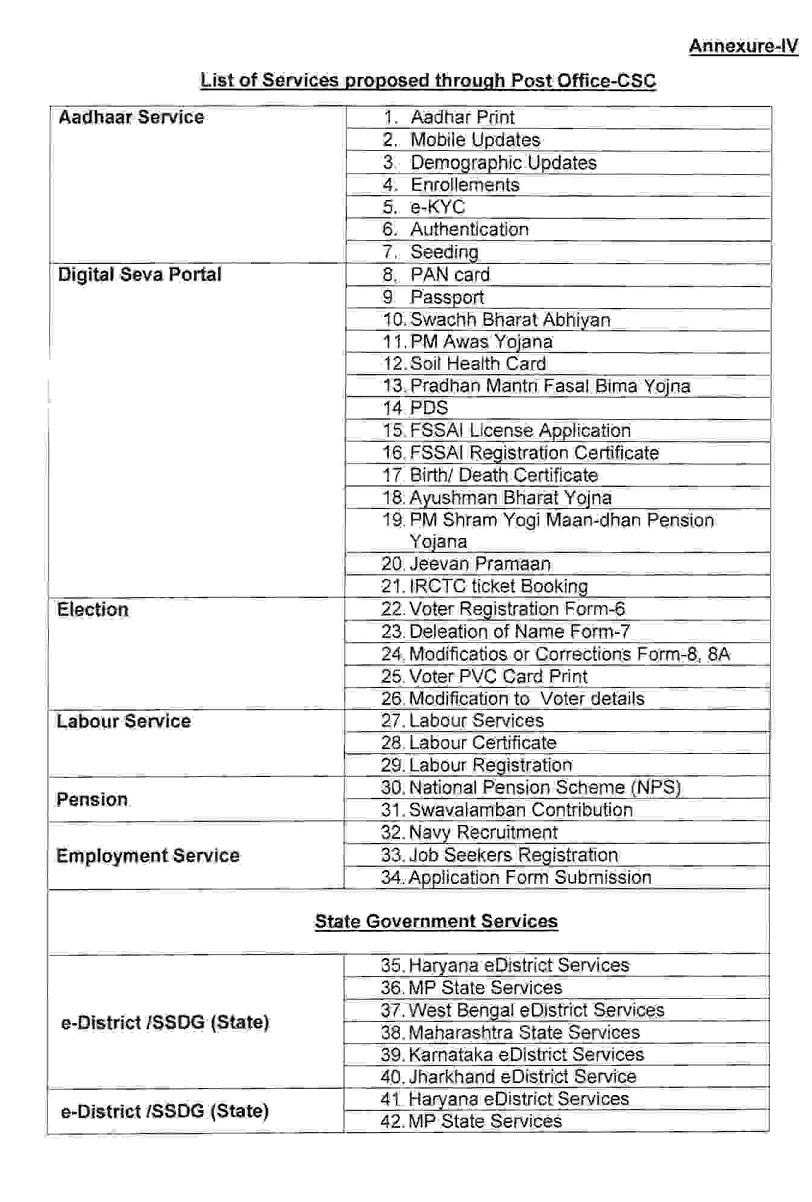 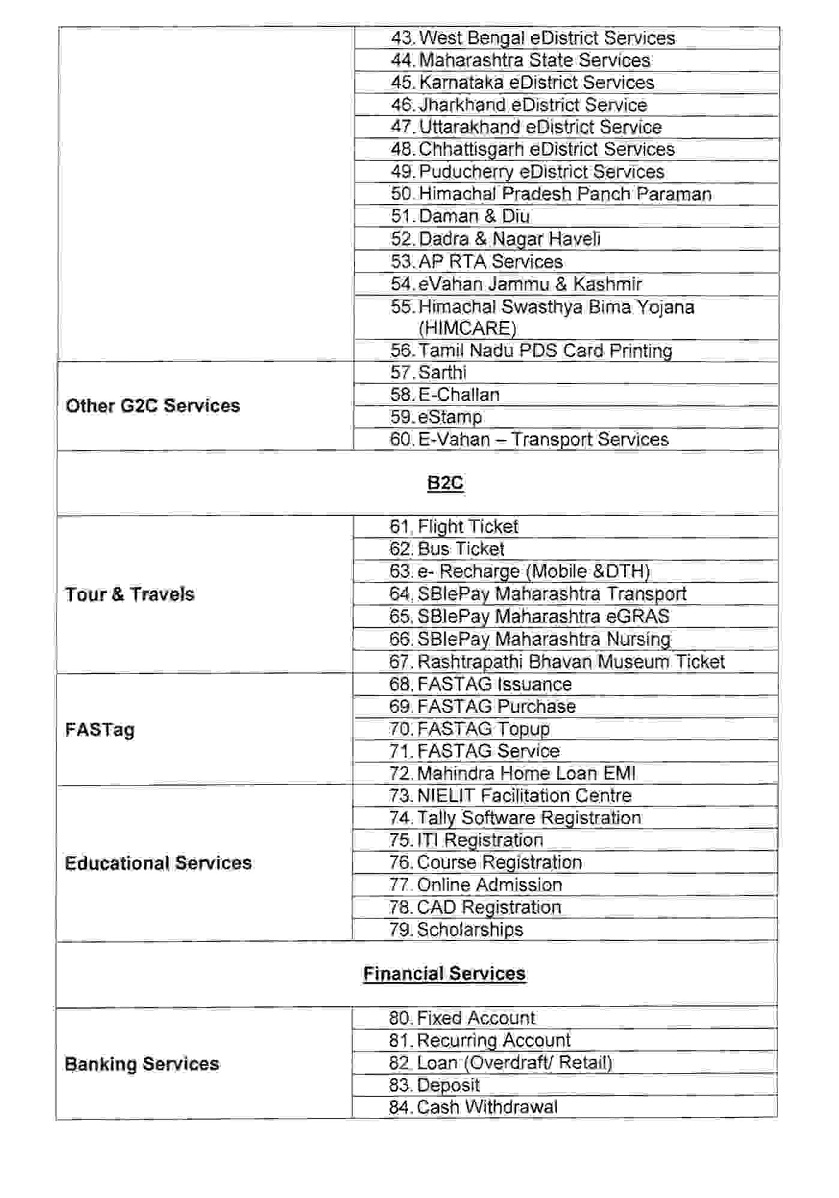 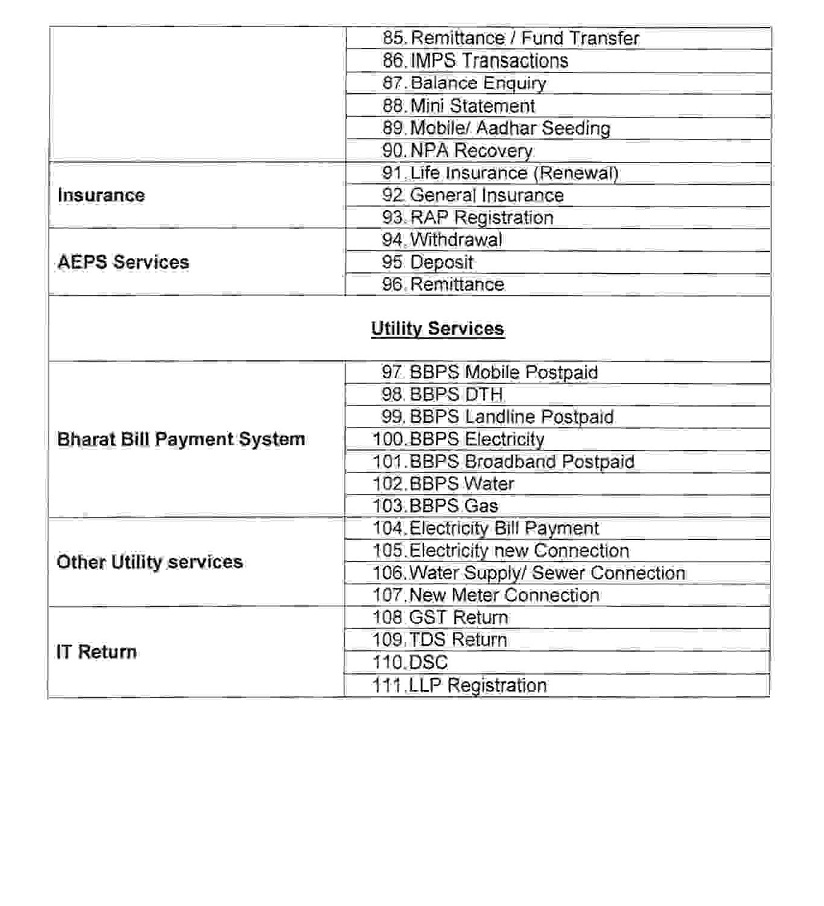 One of the key mandates of CSC scheme is to deliver Government to Citizen (G2C) services. Various G2C services of Central Government Ministries and departments, apart from State-specific services have been integrated on the Digital Seva portal for delivery to citizens in rural and remote areas of the country through the network of CSCs.

Bharat BillPay is a Reserve Bank of India (RBI) conceptualised system driven by National Payments Corporation of India (NPCI). It is a one-stop bill payment platform for all bills – electricity, mobile, broadband and landline, DTH, Gas, Water, etc - across India with certainty, reliability and safety of transactions.

FASTag is an Electronic Toll Collection system in India operated by NHAI. FASTag is a simple to use, reloadable tag which enables automatic deduction of toll charges and lets you pass through the toll plaza without stopping for cash transaction. The tag employs Radio-frequency Identification (RFID) technology and is affixed on the vehicle's windscreen after the tag account is active. It is currently operational at more than 425 toll plazas across national and state highways.

Ministry of External Affairs partnered with CSC SPV in 2014 to launch Passport Seva services through CSCs across the rural hinterland. Services available through CSCs include filling and uploading of Passport Application Form, payment of fee and scheduling of appointment for visit to Passport Kendra. During 2016-17, around 2.19 lakh Passport applications were submitted through the CSC network across the country.

Applications for new PAN Card are processed through CSCs in collaboration with UTI Infrastructure Technology And Services Limited (UTIITSL) and National Securities Depository Limited (NSDL). PAN Card service through NSDL was introduced for CSCs in February 2016. During 2016-17, 28.94 lakh Applications for PAN Card have been submitted through CSCs.

Swacch Bharat Abhiyan is the biggest ever cleanliness drive launched by the Government in 2014 to clean the streets, roads and infrastructure of the country. In 2016, Ministry of Urban Development partnered with CSC to facilitate online applications through CSCs for construction of individual household toilets across the country under the campaign. During 2016-17, 5.26 lakh applications for individual household toilets were submitted through CSC network under Swacch Bharat Abhiyan.

Pradhan Mantri Awas Yojana (PMAY) is an ambitious housing scheme of the Government for creating affordable housing units for urban poor. Although, entire urban area of the country will be covered under the scheme, the initial focus is on 500 select cities.
In November 2016, a MoU was signed between Ministry of Housing and Urban Poverty Alleviation (MHUPA) and CSC SPV for receiving PMAY applications through CSCs. The service is being provided by 60,000 CSCs located in urban areas across States/ UTs. During 2016-17, 27.97 lakh Applications were submitted through CSC network under Pradhan Mantri Awas Yojana (PMAY) scheme.

Food Safety and Standards Authority of India (FSSAI) partnered with CSC SPV in July 2016 to provide Food Business Operator (FBO) registration service through CSCs. This initiative is aimed at registering a large number of unregistered FBOs in the country with the FSSAI through the vast network of CSCs. Under the service, Registration Certificate is auto generated after filing of online application through CSC. During 2016-17, 95,603 applications for FBO Registration have been submitted through CSCs.

Soil Health Cards are issued by the Government to farmers with crop-wise recommendations of nutrients and fertilizers required for individual farms to help them improve productivity through judicious use of inputs. Launched as a scheme in 2015, the Government plans to issue these cards to 14 crore farmers.
Ministry of Agriculture & Farmers Welfare signed a MoU with CSC SPV in December 2016, to engage CSCs in the Soil Health Card scheme. During 2016-17, 1.24 lakh farmer registrations have taken place through CSCs across 23 States.

The Election Commission of India, in its endeavour to improve enrolment and correct data errors in the electoral rolls for hassle free elections, has partnered with CSC SPV for delivery of various electoral registration forms and EPIC printing through CSCs. So far, the Electoral Registration Management System (ERMS) of Tripura, Punjab, Chhattisgarh, Jharkhand, Bihar, Tamil Nadu, Gujarat, Haryana, and Maharashtra have been integrated with Digital Seva Portal.