National Federation of Postal Employees endorse the call of Confederation and Central Trade Unions to organize protest demonstration on 23rd September 2020 against anti worker, anti people destructive policies of the government of India.

Please go through the Circulars of Confederation and Central Trade Unions and publicize among all classes of workers and employees to conduct protest demonstrations at all work places during lunch hours on 23rd September-2020 after observing all Covid-19 related norms.

All General Secretaries of COCs,

All Chief Executives of All Constituent Organizations

Over the very many incidents that have taken place in the country, it appears that the Government has decided to take advantage of the corona Covid 19 pandemic in the country to push through some of the objectionable policies which affects the working class in general and the Central Government employees in particular.

(e)  Privatisation of the oldest governmental establishment of Railways; its production units and maintenance.

(f)   Direction giving unfettered powers to the bureaucracy to enforce the provisions of FR 56-J to retrench the services of senior employees;

(g)  The enlargement of NPS;

(h)  The new recruiting procedures as against the regional recruitment demanded by the employees organisations etc.

Besides all these, the Government has now chosen the two organisations  affiliated to the Confederation, i.e. NFPE and ITEF for selected attack.  In both the cases, the recognition granted to these federation are sought to be withdrawn on flimsy, untenable grounds.  The ITEF apprehends that the new scheme is bound to result in large scale redundancy and consequent retrenchment or redeployment.  In the case of NFPE,  the re-recognition is stated to be possible only if they amend certain provisions of the constitution of its affiliated Associations.  Similarly the Government had been sitting on the proposal of recognition submitted by many unions and Federation of Central Government employees, giving room for the bureaucracy to do whatever they like in administering these departmental organisations.

Apart from the above attacks, the Government has not been responding to innumerable representations the Confederation had been making in respect of providing treatment to the Central Government employees who are afflicted with the deadly virus corona covid 19.  While the private hospitals are allowed to charge exorbitantly  the government reimburses only a paltry amount to these unfortunate employees.

It is, therefore, highly necessary that we form part of the struggle of the working people in the country against these policies.  We request all affiliates, cocs, and State Committees to take steps to ensure the maximum participation of  the members in the programme slated for 23rd September, 2020.  The affiliates may kindly prepare pamphlets encompassing all the above issues and enlisting the specific matters concerning their organisation and members.   The State Committees may please prepare leaflets in vernacular and try to reach out as many members as possible. 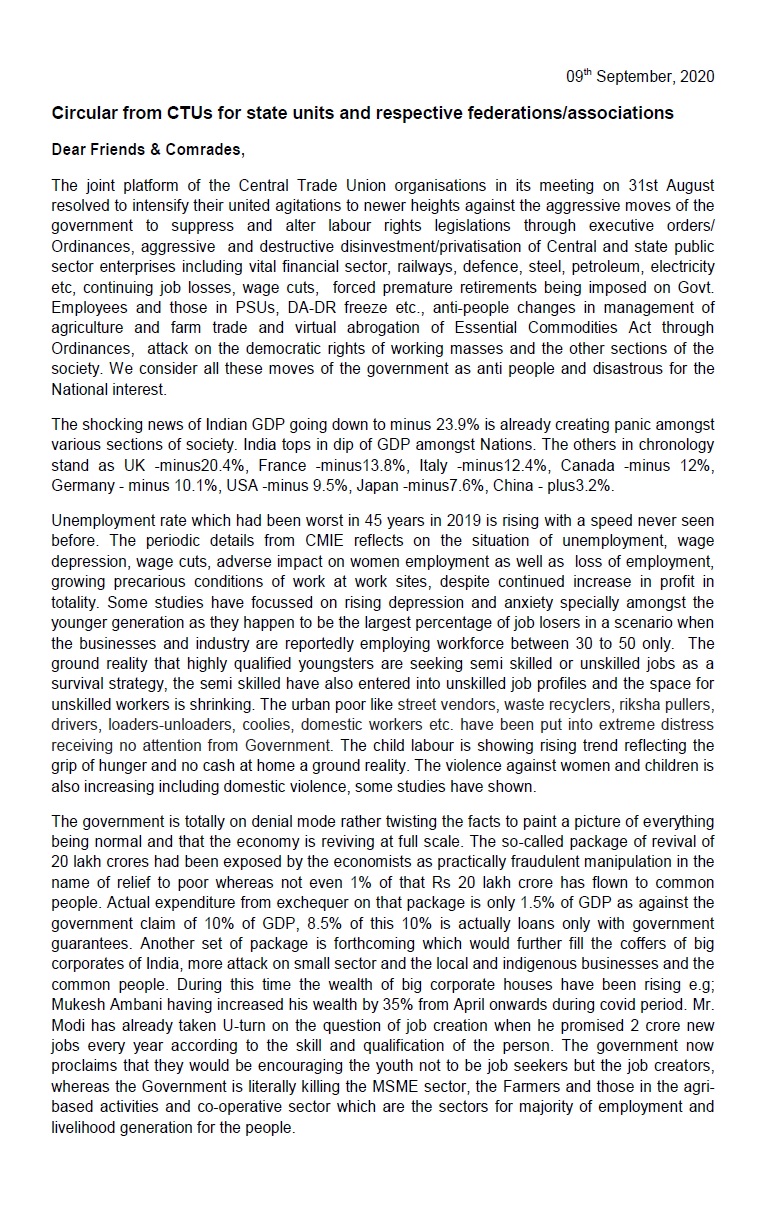 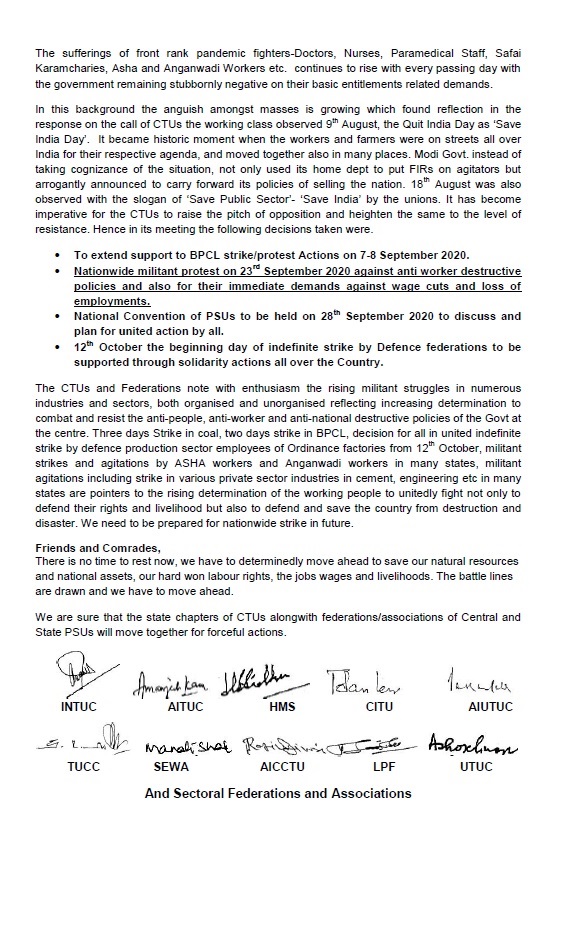