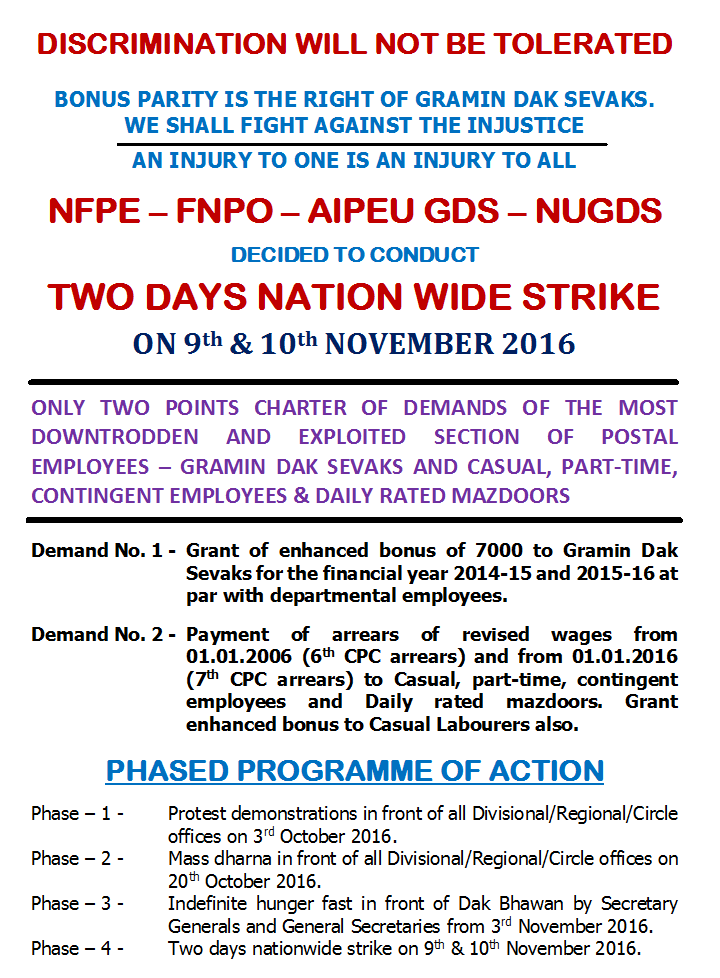 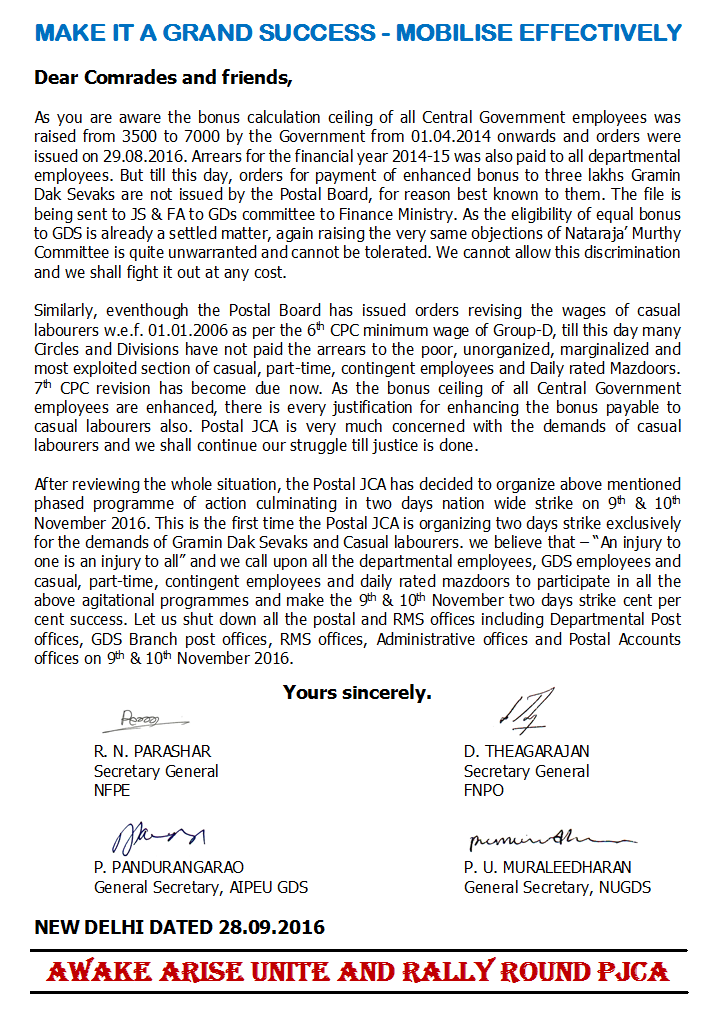 COM. DES RAJ SHARMA – THE UNCOMPROMISING FIGHTER
M. Krishnan. Ex-Secretary General, NFPE
Secretary General, Confederation of Central Govt. Employees & Workers
On 24th September I was at Chennai, on the way to Gudur (AP) to attend the Circle Conference of AIPEU Postmen & MTS Union. At about 09.25 PM, Com. R. Seethalakshmi, General Secretary, P-IV union called me and informed – “Com. Des Raj Sharma passed away.” After a few minutes Com. V. A. N. Namboodri also called. On the previous day, i.e., on 23.09.2016, at 11.30 AM myself and Com. Seethalakshmi had visited Com. Des Raj Sharma at his house at Karol Bagh, New Delhi and was with him for about 2 hours. He had a heart attack and had undergone angioplasty surgery for removal of five blocks. He was recovering fast. He discussed with us about Com. Adi and his association with many great leaders of P&T Trade union movement. He recollected his experiences while he was in the movement and also after his retirement. As he was continuously talking, I asked his wife who was sitting near, whether doctor has advised to restrict talking. His wife told no such restriction. When we were about to leave, both of us told him to take care of his health as per the advice of the doctor. Then Com. Des Raj Sharma smilingly made a comment – “Don’t worry about my health. Doctor has given me another five years guarantee. Now I am seventy one”. But while completing the sentence his sound was shaken and eyes were full of tears. May be, he was aware that death is nearing. We tried to console him and wished him long life. Next day when the sad news came I was really shocked.
Com. Desraj Sharma was a symbol of dedication, commitment and an uncompromising fighter. He truly represented the tradition of Postmen, Group D & ED staff union lead by Com. Adi. He worked as a CHQ office bearer under the dynamic leadership of the legendary leader Com. K. Adinarayana for a long time. He stood firmly with Com. Adi during the periods of trials and tribulations. It is Com. Adi who moulded Com. Desraj Sharma as a leader.
Com. Desraj Sharma never compromised with the enemies of NFPE and sometimes openly burst out against those who want to break the unity of NFPE. In the Kolkata Federal Council, it is the P-IV union which saved NFPE from a split and also helped NFPE to get recognition. He succeeded in vacating all the stay orders against conducting the Federal Council and also ensured rock-like unity among the P-IV Federal Councilors. He was outright and never say one thing and act another. The enemies of NFPE were afraid of Com. Desraj Sharma and they turned their guns against him always
After his taking over as the General Secretary of P-IV union, he concentrated in streamlining the organisational functioning of the union and helped the Branch/Divisional and Circle Unions to overcome their weaknesses. He effectively intervened and settled all the organizational disputes existed in many circles and consolidated the organizational unity and militancy of P-IV union. He championed the cause of not only Postmen and Group-D but his service was fully dedicated to the cause of GDS employees and for their emancipation. As Deputy Secretary General of NFPE he fought for safeguarding the unity of NFPE and also for settling the genuine demands of the entire Postal employees. He was also in the forefront of all activities of Confederation of Central Government Employees & Workers. In the negotiations with the administration he never compromised and was very particular about result-oriented settlement.
Com. Desraj Sharma cannot be compared with any other leader of Postal Trade union movement. “Desraj Sharma is Desraj Sharma”. He will remain forever in the minds of the Postal employees and Central Government employees.
Long Live Com. Desraj Sharma!
Long live, Long live!
Posted by All India RMS & MMS Employees Union - Group 'C' at 11:44:00 AM