Shri Ravi Shankar Prasad, Union Minister of Communications, Electronics & Information Technology and Law and Justice released a “My Stamp on Chhath Puja” today. My Stamp is an innovative concept initiated by Department of Posts. Any common person or corporate organisation can now book order and get a personalised photograph or an image of a Postage Stamp. My Stamp is one of the unique products being offered by India Post, which has gained its popularity in customised gifting category.

My Stamp on Chhath Puja is available in all Philatelic bureaux and major post offices across the country.  A special cover on the theme ‘Chhath- A symbol of Simplicity and Cleanliness ‘was also released. 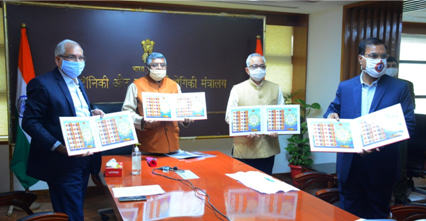 Union Minister, Shri Ravi Shankar Prasad while releasing the My Stamp said the Chhath Puja is the only festival in which we worship not only the rising sun but also the sunset i.e. Usha and Pratyusha. The worship of Surya and ChhathiMaiya is unique to the traditions and propagates values of simplicity, purity and discipline.

Shri Prasad congratulated the good work done by the Department of Posts during the pandemic especially the harnessing of digital technology for delivering money at the doorsteps of beneficiaries.

He called upon the Department to explore the possibility of depicting the history of various popular festivals through stamps.Shri PK Bisoi, Secretary , Department of Posts welcomed the Hon’ble Minister and other distinguished guests.  Shri Nitin Nabin, MLA Bankipore and Shri Sanjiv Kumar Chaurasia, MLA Digha attended the function through video conferencing in the presence of Shri Anil Kumar, Chief Postmaster, Bihar Circle and other officials of Bihar Postal Circle. Shri Vineet Pandey, Director General, proposed the vote of thanks.